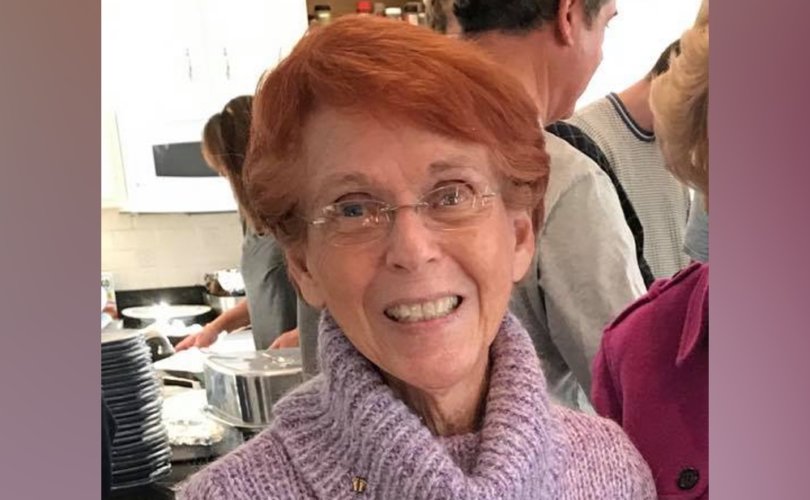 LOUISVILLE, Kentucky, April 15, 2019 (LifeSiteNews) ― A well-loved pro-life sidewalk counselor was attacked by a woman exiting an abortion mill, leaving her with a broken thighbone and a bleeding head wound.

Donna Durning, a sidewalk counselor for over 20 years, was outside the E.M.W. Women’s Surgical Center on the afternoon of April 13 when a younger woman who had been inside the abortion mill violently pushed her, causing her to fall on the pavement. She underwent surgery.

Durning told LifeSiteNews that the young woman, who was in her early twenties, had gone out from the clinic to a car that was waiting for her. It was around 4 o’clock in the afternoon.

“She turned and looked at me,” Durning recounted, “and I gave her a sweet little card… I said ‘Honey, this is for you; if you want to talk to somebody there’s a phone number there.’ She grabbed me by both shoulders and literally threw me to the ground.”

Durning sustained a head wound and a fractured femur. Fortunately, her skull did not break, and she didn’t suffer any brain injuries.

The next day Adele Darnowski, a friend of Durning, took a photograph of Durning’s blood on the sidewalk, posted it on Facebook and remarked “Seventeen mothers walked over it today to go in to have their abortions. Poor dears.”

She also reflected, “The blood of the martyrs is the seed of the Church.”

Darnowski told LifeSiteNews that police were already on the scene.

“The police who were in a car across the street immediately entered the EMW and confiscated the surveillance tapes,” she said

Witnesses at the scene recorded the license plate number of the car in which the assailant and her friend drove away.

An ambulance was called while Durning was attended by the other pro-life witnesses outside the clinic. Her blood was still visible on the ground the next day.

“The picture [see above] does not do justice to it,” Darnowski said.

Local pro-life lawyer Vince Heuser also spoke to LifeSiteNews, saying that he would make sure the prosecution of Durning’s assailant went forward.

“Pro-lifers do try to turn the other cheek, but beating up an old lady is not to be tolerated in anyone,” Heuser said, adding that Durning was not going to like being called an old lady.

E.M.W. Women’s Surgical Center is the last freestanding abortion mill in the state of Kentucky, and it is a hotbed of both pro-life witness and pro-abortion demonstrations. Material help is offered to abortion-minded women in Louisville at a number of pro-life institutions including LifeHouse Maternity and BSideU for Life Pregnancy Center. The latter is right next door to the abortion clinic.

Darnowski told LifeSiteNews that although Durning has encountered violence outside the clinic before, violence against demonstrators is unusual. However, tensions run high during 40 Days for Life.

“This past Saturday, one day after the incident, there was a huge amount of activity down there,” she said, to illustrate.

“Operation Save America was there but not getting arrested that day. Two [police] cars [were] across the street.  One hundred and ten of us pro-lifers including the group from Helpers of God's Precious Infants [were] across the street, and the Catholics praying the rosary, three different Protestant pastors with their megaphones, ten or so pro-aborts taking turns playing carnival music on a boombox …  By 8:30 PM seventeen women had gone in.”

Donna Durning has been praying and witnessing outside E.M.W. Women’s Surgical Center almost every day for 23 years.  She told LifeSiteNews that she is usually there from 6:30 AM until 9:15 AM, but on Friday she stayed the whole day to help out the less experienced pro-life witnesses from her parish participating in Forty Days for Life.

On Saturday, Durning’s femur was surgically reconstructed, and she told LifeSiteNews today that she was delighted with the staff at Louisville’s Baptist Health Hospital.

“There are so many good people in this world,” she enthused.

Durning is expected to make a full recovery. Tomorrow she will begin five days of rehabilitation at Louisville’s Nazareth Home.