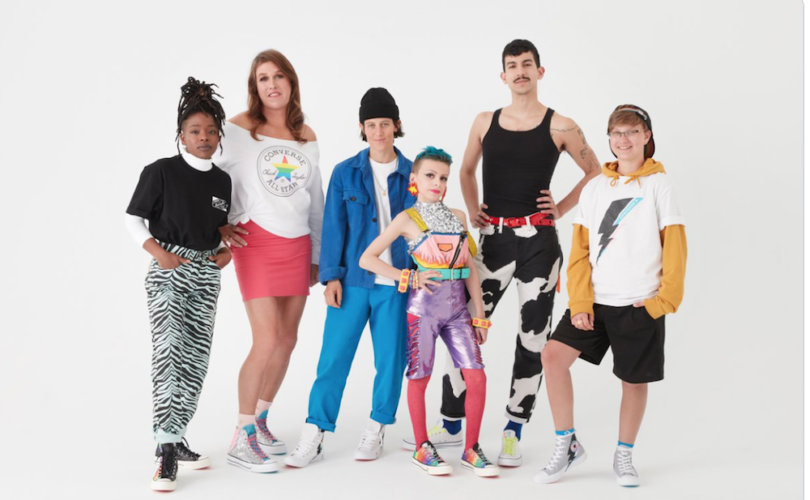 BOSTON, Massachusetts, May 9, 2019 (LifeSiteNews) ― An 11-year-old drag performer known as Desmond-is-Amazing is now a model for a shoe company.

The Converse footwear company, once known for its fashionable high top basketball shoes, has announced a new “partnership” with Desmond Napoles and five other  “individuals connected with the LGBTQ+ community” to market its new “Pride collection.”

The announcement accompanied a photograph of Desmond dressed in a colorful shoulder-baring outfit and heavy makeup, posing suggestively before the five other models, including a man dressed as a woman and two women dressed as boys.

Publishing the news on Twitter, Converse said, “We're happy to launch our Pride Collection, partnering with six individuals connected to the LGBTQ+ community who show the power of expressing one's true self. Contributions are supporting @[email protected] & @FenwayHealth.

“It Gets Better” and “Out Metro West” are LBGT charities, and “Fenway Health” is a Boston medical organization specializing in the health of people with same-sex attractions and HIV/AIDS research. Converse is a Boston company, owned by Nike.

“Now that's true equality: child abuse in the USA to match the child abuse in foreign Converse sweatshops. Nothing or no-one should stand in the way of corporate greed,” tweeted Down children advocate Renate Lindeman and linked to an Oxfam article about abuse of workers in a Converse factory in Indonesia.

“Congrats on enabling child abuse here in America to go along with the children making your crummy shoes in sweatshops overseas,” tweeted John Hawkins.

Tamara Pfanstiel tweeted: “What they are doing to that child is abuse. Children aren’t supposed to be ‘sexy.’ That disgusting. Get a grip.”

Some LGBT advocates were disgusted that Converse was trying to appeal to buyers though the use of children.

“It's really painful trying to advocate for LGBT positivity when you see ACTUAL child sexualization lumped into it like a tumor. Whatever clueless executive signed off on this should be ashamed,” tweeted an individual called “F***ING FINALS RGC”.

Another Tweeter posted a video of Desmond pretending to snort club drug ketamine during a video appearance with an adult female impersonator or “drag queen.”

Desmond has been at the center of a controversy concerning his public appearances as a child drag performer. He first attracted public attention when he was filmed at age 10 onstage at RuPaul’s DragCon 2017. The famous host referred to the boy as “this gorgeous little queen.” The child subsequently appeared on Good Morning America and accepted engagements dancing in gay bars. He was filmed dancing in both New York and San Francisco as men threw money at him.

Desmond also appeared on a YouTube talk show hosted by Michael Alig, a 1990s New York dance club personality who spent almost 17 years in prison for manslaughter after the violent death and dismemberment of a drug dealer named Andre Melendez.

Public outcry has led to multiple complaints to several state social welfare departments against Desmond’s parents, Wendy and Andrew Napoles. However, Wendy Napoles recently stated on social media that she and her husband have been cleared of any neglect or wrongdoing and posted letters on Instagram from welfare agencies attesting to this. She has also stated that she and her husband do not profit from Desmond’s performances.

Desmond, who has autism, has stated that he is a homosexual.