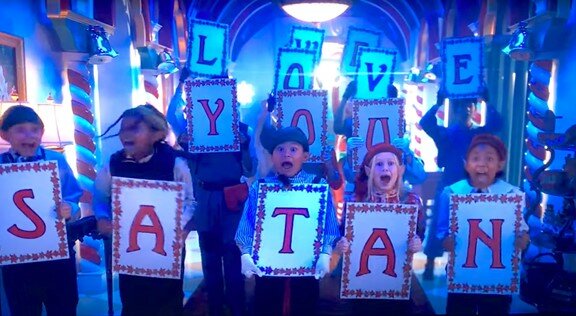 (LifeSiteNews) – Disney is coming under fire for a scene in its new Christmas miniseries, The Santa Clauses, where child actors playing elves greet Santa with giant letters spelling “WE LOVE YOU SATAN” before quickly rearranging themselves to spell out their intended message “WE LOVE YOU SANTA.”

While the comedic scene is brief, and the child elves act appropriately horrified when they realize their error, some parents see this as Disney again revealing its dark side.

“Parental outrage is understandable — seeing how Disney has an affinity for the Prince of Darkness,” wrote conservative commentator Todd Starnes, who shared the reactions of parents posted to Facebook:

This is sickening and absolutely disgusting that our children are being exposed to things like this. In the movie they play it off like the children “didn’t spell Santa correctly!” I will definitely not be watching any of these anymore nor will my child.

This is the world we live in right now and it’s very sad and disappointing. Be cautious about what you’re letting your kids watch. I am not one to nitpick shows because I know they have corny jokes in pretty much all shows, but to me, this is not a joke when you have a bunch of kids (elves) holding signs that say “we love you Satan” because they “misspelled it.”

Indoctrinating your kids … I’ve considered canceling my Disney plus subscription a few times, but I think this may be the reason I needed.

In 2020, the folks at Disney premiered a cartoon series titled “The Owl House” that introduced young viewers to a world of demons and witchcraft.

“Folks, if you think this latest ‘Owl House’ show is just ‘fantasy and fun,’ think again,” warned CBN contributing writer Deborah Bunting at the time. “Over the years, Disney has gone farther and farther into the darkness of the spiritual world that opposes the living God, coming up with programming and characters that lead the vulnerable into that dark world of deception.”

“This spiritual realm that opposes God is real. Demons are real,” Bunting noted. “And they are out to deceive your children and draw them in to be pawns of the enemy of their souls, the Devil, otherwise known as Satan. His devices and plans are to destroy your kids and grandkids spiritually, physically and emotionally. You must protect them from being enticed into this demonic world.”

Then in August, Disney launched a new adult TV series titled “Little Demon” that chronicles the story of Satan’s daughter, normalizing explicit sexual references and the presence of the devil in society.

Thirteen years after being impregnated by Satan, a reluctant mother, Laura, and her Antichrist daughter, Chrissy, attempt to live an ordinary life in Delaware but are constantly thwarted by monstrous forces, including Satan, who yearns for custody of his daughter’s soul.

“ABSOLUTELY HORRENDOUS!!!” one viewer wrote. “The producers and everyone involved in this production needs to repent of making this show and turn to Jesus Christ!!! The absolute wickedness that our culture is turning to in allowing and trying to believe that anything demonic and satanic is ‘safe’ or ‘not that big of a deal.’”

U.S. Rep. Mike Johnson, a Republican representing Louisiana, attracted a great deal of attention over his criticism of the show, which he posted on Facebook.

“I couldn’t get to the remote fast enough to shield my 11-year-old from the preview,” he wrote. “I wonder how many other children were exposed to it.”

The congressman also quoted Aubrey Plaza, who voices the character Laura, when she said, “I love that we are normalizing paganism” in an interview with the show’s cast and creators.