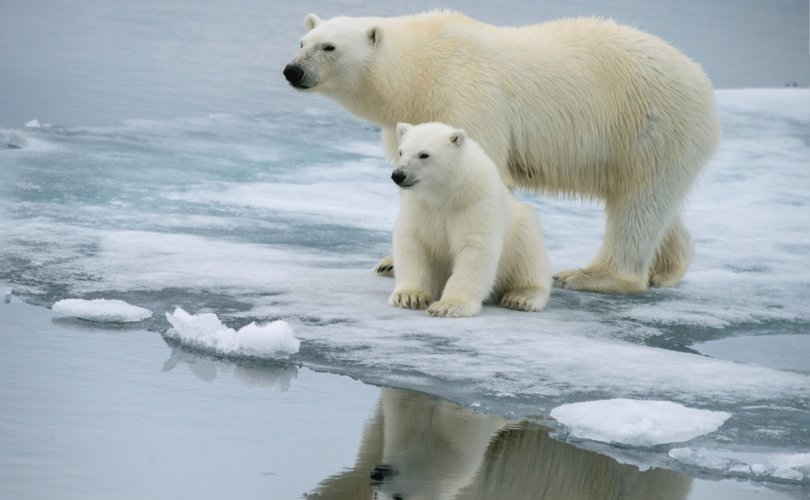 DAVOS, Switzerland, February 5, 2021 (LifeSiteNews) — The Davos summit of 2019 saw Sir David Attenborough, world-renowned naturalist, reveal a documentary “demonstrating” the “devastating effects” of climate change in the emotionally charged film clip. Evidence has now come to light that shows Attenborough presented fraudulent and misleading information in his tape to dupe those gathered about the rate and effect of climate change.

The World Economic Forum (WEF) hosts the Davos summit annually, where world elites and billionaires gather to discuss the future of the world, often devising plans to radically change the economic and societal structures currently in place.

A frequent refrain of WEF leaders is the now familiar term, the “Great Reset,” which references a concerted, corporate effort to reshape world economies by the socialist mold, using the COVID-19 “pandemic” as a catalyst. Alongside the destruction of capitalism, a major constituent part of the Great Reset is the green movement, a response to the “climate emergency” to which Davos elites claim humans have contributed greatly through global warming. This, on their account, requires governments to enact social policies that levy heavy taxes on carbon dioxide–producing goods and encouraging veganism, for instance.

A clip from Attenborough’s Netflix series, Our Planet, was shown at the 2019 summit to convince attendees that climate change really is having a deadly impact on the world and everything in it. The clip showed a huddle of walruses atop a steep, sharp cliff edge, apparently throwing themselves off the edge, unprovoked, to their deaths, “because of climate change.”

The claim, put forward by Attenborough during the event, was that the walruses were dying due to a lack of sea ice, the beasts’ natural hunting ground, caused by climate change. In reality, polar bears had been chasing and frightening the pod, which, being perched at the edge of such a precipice, and having poor eyesight, led them to tumble straight down.

Crockford noted that the walrus population around eastern Siberia, roughly the area where Netflix filmed, has seen an increase in numbers in the last decade. The increased “haul-out,” Crockford says, is not a sign that “global warming is causing problems”; it is “a sign that walruses are thriving.”

In fact, the species of Pacific walrus has been doing so well that “[t]he U.S. Fish and Wildlife service has found that the Pacific walrus does not require protection as threatened or endangered under the Endangered Species Act,” Crockford notes.

The scenes of shores tightly packed with walruses are therefore not how Attenborough portrayed them, and Crockford claims that he and the film crew know this. The director of the Netflix-produced film, Sophie Lanfear, admitted as much when she told the Telegraph that there were polar bears in sight as they filmed the walruses, but denied that the bears were approaching close enough to the group to elicit any response.

Attenborough himself later admitted, in a BBC documentary featuring some of the same footage called Seven Worlds: One Planet, that walrus deaths from falling off the very same cliff edges were due to polar bears hunting. Reviewing the footage, Crockford, herself a polar bear expert of considerable renown, said it is “damning evidence that the ‘Our Planet’ account of walrus deaths had been a false narrative, constructed to elicit an emotional response from the public.”

This is not the only polar bear–related controversy to involve David Attenborough. Also in 2019, the filmmaker was accused of “misleading the public on the state of polar bear populations in Canada.” In fact, in the above-mentioned Seven Worlds: One Planet, Climate Change Dispatch wrote at the time, “David Attenborough made false claims, used emotionally manipulative language and blatantly misrepresented several natural biological processes and habitat conditions as the effects of human-caused climate change.” Among other debunked claims, Attenborough alleged that polar bears in Canada suffer from starvation in the summer and that polar bears had recently begun hunting beluga whales in the summer as a result of man-caused climate change’s effect on their habitat.

After 15 years as adjunct professor at U.V., Crockford had her renewal application rejected by the university, without explanation, despite her high profile in scientific research regarding polar bears, which she discovered are thriving, contravening the narrative of the climate change movement. Concerned about “cancel culture” and the stifling of academic freedom, Crockford called the move by the university “an academic hanging without a trial, conducted behind closed doors.”

The WEF’s virtual Davos summit of 2021, just weeks ago, made sure to capitalize on Attenborough’s successful ruse by addressing climate change, an integral part of the WEF’s broader Great Reset initiative, claiming that it “poses an urgent threat demanding decisive action.”

— Article continues below Petition —
PETITION: No to mandatory vaccination for the coronavirus
Show Petition Text
1082129 have signed the petition.
Let's get to 1100000!
Thank you for signing this petition!
Add your signature:
Show Petition Text

As well as necessitating an economic “reset,” “it is essential that businesses, policy-makers, and civil society advance comprehensive near and long-term climate actions in line with the goals of the Paris Agreement on climate change.” These goals are not limited to “net-zero carbon emissions,” but extend into “gender equality, empowerment of women,” and “the right to health” — the last being a veiled reference to contraception and abortion.

“True change will require system change, not mere reform,” the Davos Agenda asserts. “Building a better world is within our reach, but it requires global cooperation at unprecedented levels.”

Klaus Schwab, founder and executive chairman of the WEF, who literally wrote the book on the Great Reset, claims that the “pandemic represents a rare but narrow window of opportunity to reflect, reimagine, and reset our world.”

The WEF has devised a “Climate Initiative” to this end, which “supports the scaling and acceleration of global climate action through public and private-sector collaboration.” The Davos Agenda conference of last month, which included President of China Xi Jinping as one of its key speakers, leaned heavily on the “green” movement.

Attenborough’s deceitful efforts have helped shape this part of the Davos Agenda. Despite being disproved, the naturalist, as part of the continuing effort, has managed to convince global elites that time is short, the effects are devastating, and that, subsequently, Schwab’s claim that the “pandemic offers a rare but narrow window of opportunity to … reset our world” is true.