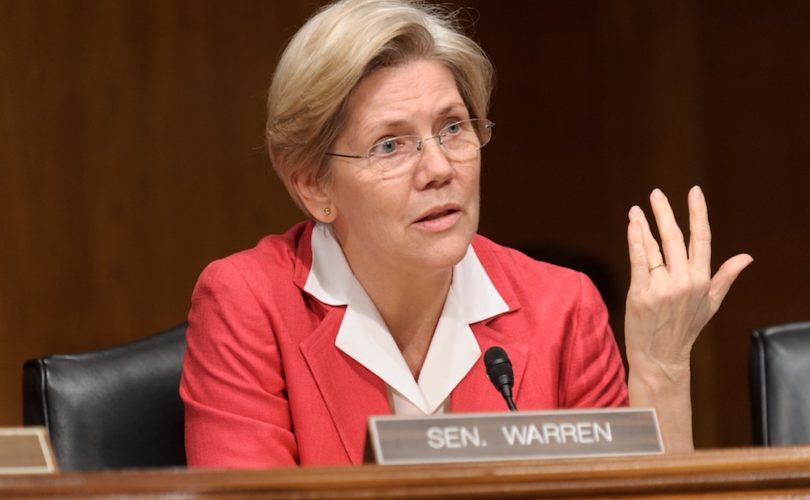 Last week, the Senate voted 54-45 to confirm Barr, a longtime veteran of the CIA and Justice Department who already held the position of Attorney General during the first Bush administration. Among the issues raised prior to his confirmation was Barr’s past comments declaring the Supreme Court should overturn its infamous 1973 ruling that unleashed abortion-on-demand, because it “does not have any constitutional underpinnings.”

During his confirmation hearings, Democrats also grilled Barr on whether he would continue his predecessor Jeff Sessions’ decision not to defend the Affordable Care Act, better known as Obamacare, in court. He answered only that he “would like to review” that decision’s reasoning and that he would be open to reversing it depending on what his review determined.

“I’m deeply disappointed that the Senate confirmed William Barr as U.S. Attorney General,” Warren responded via Twitter. “I’ll keep fighting to protect the Affordable Care Act and Roe v. Wade—and I’ll do everything I can to ensure that Special Counsel Mueller can do his job without interference.”

I’m deeply disappointed that the Senate confirmed William Barr as US Attorney General. I’ll keep fighting to protect the Affordable Care Act and Roe v. Wade – and I’ll do everything I can to ensure that Special Counsel Mueller can do his job without interference. https://t.co/Vc92J9busZ

The senator also tweeted her apparent belief that “our kids are America’s future,” and that she was “fighting for a government in Washington that will invest in our children and our grandchildren.”

Our kids are America’s future. I told the crowd in Iowa City: I’m fighting for a government in Washington that will invest in our children and our grandchildren. pic.twitter.com/ftnqzmN1cX

Warren’s first tweet contradicts her second, as Roe forces all 50 states to allow children and grandchildren to be aborted for any reason at least until “viability,” and effectively through the remainder of pregnancy for “health” reasons (defined by companion ruling Doe v. Bolton broadly enough to include “physical, emotional, psychological, familial,” and “age” factors).

Warren, who rose to prominence as a sharp critic of Wall Street and is currently under fire for her history of falsely claiming Native American ancestry, is an ally of Planned Parenthood who has called abortion safer than tonsillectomies and suggested that late-term abortions can be “act[s] of mercy” for disabled children. She also advocates for homosexuals to be allowed to donate blood despite increased risks of HIV.

She is competing against Cory Booker, Kirsten Gillibrand, Kamala Harris, Amy Klobuchar, Tulsi Gabbard, Julian Castro, John Delaney, Pete Buttigieg, Marianne Williamson, Andrew Yang, and most recently Bernie Sanders for the opportunity to challenge Trump for control of the White House. All of the current Democrat field is virtually indistinguishable on abortion.