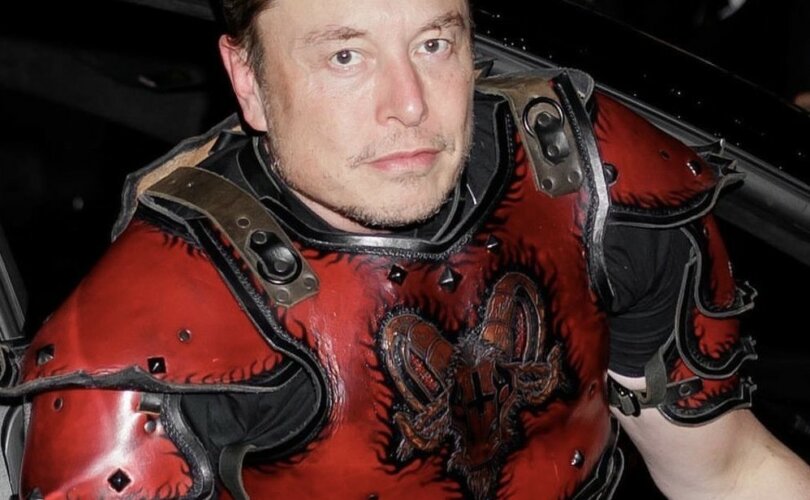 (LifeSiteNews) — Elon Musk, the new CEO of Twitter and the richest man in the world, donned a “Devil’s Champion” costume to a Halloween bash on Monday evening, complete with a Baphomet icon and an upside-down cross.

One Twitter user compared the costume’s insignia, which emblazoned a chest plate as well as two arm plates, to a satanic baphomet image that likewise sports an inverted cross, showing their close resemblance to each other.

While Musk is widely praised by conservatives for his free speech stance, his outfit immediately sparked concern, among Christians especially, over its blatantly satanic imagery.

“Musk’s take on free speech should be celebrated but as of right now it’s quite fair to question why the world’s richest man, who is also a major U.S. Defense contractor (SpaceX) and is the owner of [Neuralink], a company attempting to hook the human brain up to computers, is wearing the Baphomet coupled with inverted crosses as if it’s a badge of honor,” remarked Anthony Scott for the Gateway Pundit.

One of the most “liked” responses to Musk’s costume on Twitter was, “I love when they tell you exactly who they are like this. And then people think you’re crazy when you simply pay attention.”

While mainstream media commentators have disparaged apprehension over the costume as needless “obsession” over something “harmless,” the costume does call into question Musk’s beliefs, loyalties and spiritual practices, other remarks by Musk considered, since the satanic Baphomet image traditionally represents evil.

As Scott has suggested, his true beliefs are consequential not only because of his wealth and his popularity with the youth, but because of the potentially unprecedented human influence baked into a brain-computer interface (BCI) implant being developed by his company Neuralink.

Musk believes use of such BCIs will soon become commonplace and has predicted on a May 2020 Joe Rogan podcast that humans will “telepathically” communicate with each other within “five to 10 years” if progress goes smoothly.

Such technology raises hugely consequential ethical questions that can be approached in very different ways depending on one’s moral framework.

While Musk’s moral beliefs are unclear, his interviews and comments indicate that he rejects God and traditional religions. He shared in an interview earlier this year that he does not “worship” anything, but instead “devote[s]” himself “to the advancement of humanity.”

When actor Rainn Wilson asked Musk if he prayed, he responded, “I didn’t even pray when I almost died of malaria.”

Musk also flippantly addressed the idea of going to hell earlier this year, after a man named Mohammed asked Musk to “confess” that there is a God before his “last heartbeat.”

“Thank you for the blessing, but I’m ok with going to hell, if indeed that is my destination, since the vast majority of all humans ever born will be there,” Musk replied.