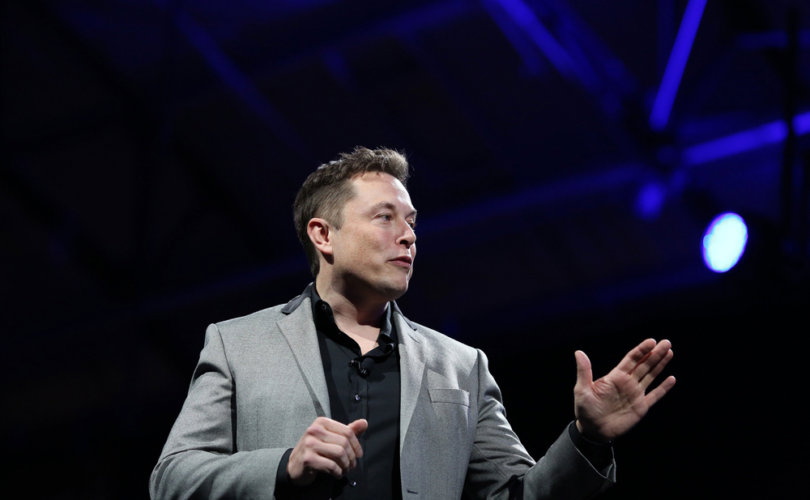 WASHINGTON, D.C. (LifeSiteNews) – Tesla CEO and SpaceX founder Elon Musk warned Monday that the world is in danger of collapsing from a low birthrate, contrary to the common belief that the world is threatened by overpopulation.

“I think one of the biggest risks to civilization is the low birthrate and the rapidly declining birthrate,” the father of six said at The Wall Street Journal’s annual CEO Council on Monday evening, according to the New York Post.

“It’s completely the opposite. Please look at the numbers — if people don’t have more children, civilization is going to crumble, mark my words.”

Musk’s “remarks came in response to a question about how his company’s not-yet-released Tesla Bot could solve labor issues,” the New York Post reported. The Tesla Bot is a humanoid robot that Musk has said is designed to do work that is “boring, repetitive, and dangerous.”

On Monday, he added that the Tesla Bot could be a “generalized substitute for human labor over time” — which will become increasingly important if the human labor supply falls short.

Only a few well-known figures have been sounding the alarm about population collapse. Musk has publicly warned of declining birth rates several times before.

In August 2019 at the World Artificial Intelligence Conference in Shanghai, Musk said he believes “the biggest problem the world will face in 20 years is population collapse,” also noting, “Most people think we have too many people on the planet, but actually this is an outdated view.”

Statistics show that the rate of world population increase has been on an overall steep decline since 1970, when it was 2.06 percent per year, now down to the current rate of 1.05 percent per year.

Back in 2017, Musk remarked, “The world’s population is accelerating towards collapse, but few seem to notice or care,” in a tweet comment upon a November 2016New Scientist article expecting a global population “crash” in 2076 due to below-replacement fertility rates in half of the world’s countries.

Indeed, most developed countries are falling short of the 2.1 children per woman needed for replacement fertility. The Population Research Institute recently shared that at least 96 countries, or about half of the word, are projected to be below replacement fertility for the 2020-2025 period.

Population Research Institute has pointed out if these below-replacement rate trends continue, whole societies will decrease in number exponentially, and will be in danger of extinction.

Celebrated columnist and pro-family leader Don Feder lamented the use of contraception and abortion and the decline of marriage as contributing to the faling birthrate, but he believes “the most important factor” is “a culture that tells people that children are a burden rather than a joy … a culture that tells us that contentment comes from careers, love, friendship, pets, possessions, travel, personal growth – anything and everything except family and children.”