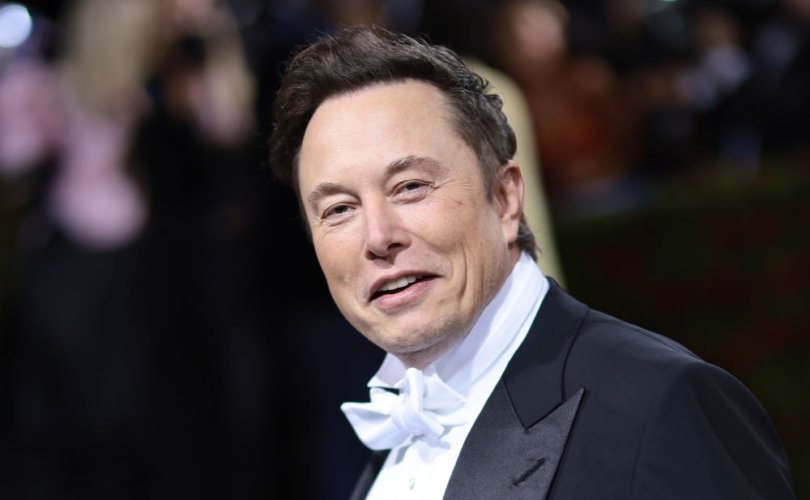 NEW YORK, NEW YORK - MAY 02: Elon Musk attends The 2022 Met Gala Celebrating "In America: An Anthology of Fashion" at The Metropolitan Museum of Art.Dimitrios Kambouris/Getty Images for The Met Museum/Vogue

(LifeSiteNews) — Elon Musk once again promoted the importance of free speech and transparency during a meeting with Twitter employees Thursday, arguing that “people should be allowed to say some pretty outrageous things” on Twitter, although policies should limit the “reach” of certain types of content.

“I think it’s essential to have free speech,” Musk said during the all-hands meeting with Twitter employees, according to a leaked video obtained by Project Veritas.

“It’s essential to have free speech.”

“It’s important to represent multiple opinions & not driving a narrative.”

“In order for people to have trust in @Twitter there needs to be transparency.” pic.twitter.com/7rNphPg2zH

The Tesla and SpaceX founder, who is moving forward with a $44 billion deal to purchase Twitter, added that “an important goal for Twitter would really be to try to include as much of the country, as much of the world as possible.”

In a June 14 Twitter post, Musk had similarly argued that “A platform cannot be considered inclusive or fair if it is biased against half the country.”

Twitter has drawn fire from free speech advocates over the years for cracking down on right-wing political speech on topics including the COVID-19 debate, election integrity, and transgenderism.

Noting that “multiple opinions” should be allowed to be expressed on the platform, Musk said during the Thursday meeting that Twitter should not take it upon itself to drive “a narrative.”

Musk, who said he plans to vote Republican this year despite having voted consistently for Democrats in the past and recently gave his informal endorsement to Florida Republican Gov. Ron DeSantis for president in 2024, also took a swipe at the media.

“How many times has the media gotten it right?” he said. “I would say almost never. Not never, but almost never.”

Musk also reiterated a previous suggestion that a proper ideological balance of Twitter would likely mean the far-left and far-right would be “equally upset.”

For Twitter to deserve public trust, it must be politically neutral, which effectively means upsetting the far right and the far left equally

READ: Elon Musk: ‘I might never have voted for a Republican…this election I will’

Asked to describe his political views, Musk characterized his stance as “moderate.”

“I’m in favor of moderate politics,” he said, adding that he’s also in favor of “allowing people who have relatively extreme views to express those views within the bounds of the law.”

The world’s richest man further explained that while he wants to expand the boundaries of free speech on Twitter, he does not suggest that Twitter “flout the law, because we’ll get shut down in that case.”

Drawing a distinction between “freedom of speech” and “freedom of reach,” Musk suggested that “people should be allowed to say some pretty outrageous things” online, as long as those things “are within the bounds of law.” However, such “outrageous” content may get limited “reach” on the platform under Musk’s proposed policies.

Musk also told Twitter employees it is “extremely important” that there be “transparency” if users are to trust the platform.

Bloomberg noted that the all-hands meeting is the first time Musk has met with Twitter’s full staff, likely indicating that his deal to acquire the company may be nearing finalization.

The apparently imminent conclusion of the Twitter purchase saga comes after the deal has undergone a number of negotiations and roadblocks.

Prior to agreeing to sell to Musk, Twitter had attempted to buck the billionaire’s unsolicited offer, unsuccessfully opting to use a “poison pill” tactic in a bid to shake off the hostile takeover.

Last month, Musk had put his multibillion dollar offer on hold pending investigation into the true number of fake accounts on the platform. While Twitter had stated its percentage of spam accounts was roughly 5%, some researchers put that number much higher, at 9-15%, according to Reuters.