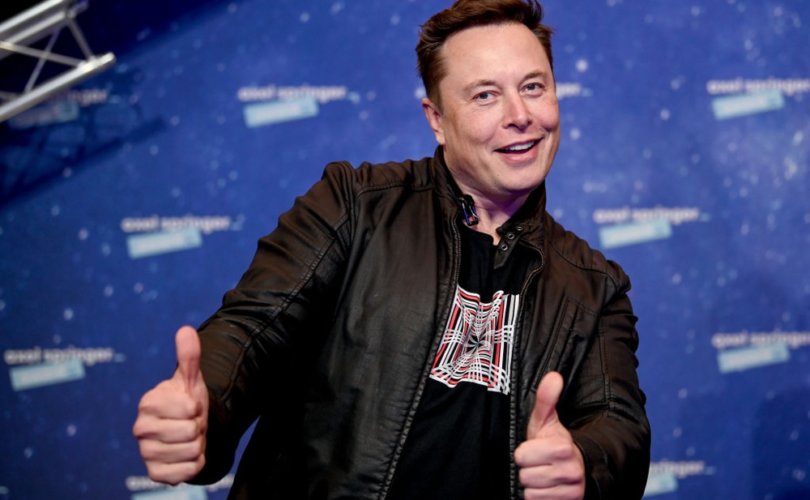 (LifeSiteNews) — Maverick entrepreneur Elon Musk, whose $44 billion offer to purchase Twitter is reportedly on hold pending independent investigation into the number of fraudulent accounts on the platform, has said he’ll vote Republican this year despite having voted consistently for Democrats in the past.

During a Monday interview on the All-In podcast, the Tesla and SpaceX founder said he’s prepared to vote for Republicans in the next election.

“I have voted overwhelmingly for Democrats, historically. Like I’m not sure, I might never have voted for a Republican, just to be clear,” Musk said.

“Now this election I will,” he said.

Elon Musk, the guy who makes electric cars, is now a Republican.

That’s how nonsensical these Democrat policies have gotten under Joe Biden.

Musk reiterated his decision to switch political parties in a Wednesday Tweet, explaining that he had voted for Democrats in the past “because they were (mostly) the kindness party,” but that they had now “become the party of division & hate.”

“I can no longer support them and will vote Republican,” he added. “Now, watch their dirty tricks campaign against me unfold …”

In the past I voted Democrat, because they were (mostly) the kindness party.

But they have become the party of division & hate, so I can no longer support them and will vote Republican.

Now, watch their dirty tricks campaign against me unfold … 🍿

Musk’s comments come just weeks after he shared an image on social media depicting the political left in America becoming more extreme while his own political perspectives have remained the same.

According to the characterization in the graphic, Musk would have been considered “center left” in 2008, but “center right” in the political landscape of 2021 despite not changing his views.

During the Monday podcast, he argued that Twitter has a “very far-left bias.”

Previously, the world’s richest man has emphasized that he is opposed to any “censorship that goes far beyond the law.”

“If people want less free speech, they will ask government to pass laws to that effect,” he wrote in an April 26 tweet.

“Therefore, going beyond the law is contrary to the will of the people,” he added.

By “free speech”, I simply mean that which matches the law.

I am against censorship that goes far beyond the law.

If people want less free speech, they will ask government to pass laws to that effect.

Therefore, going beyond the law is contrary to the will of the people.

On Wednesday, Musk torched “Environmental, Social, and Governance” (ESG) scores, which track and reward companies’ compliance with a range of left-wing social agenda items including racial and sexual diversity and green energy.

According to Musk, “ESG is a scam,” having been “weaponized by phony social justice warriors.”

ESG is a scam. It has been weaponized by phony social justice warriors.

The billionaire has also stated that if his Twitter purchase deal goes through, he will reactivate the banned account of former President Donald Trump.

Musk has said Twitter’s decision to ban Trump following the January 6, 2021 Capitol riot was “foolish” and “morally wrong,” explaining that permanent bans “fundamentally undermine trust in Twitter as a town square where everyone can voice their opinion.”