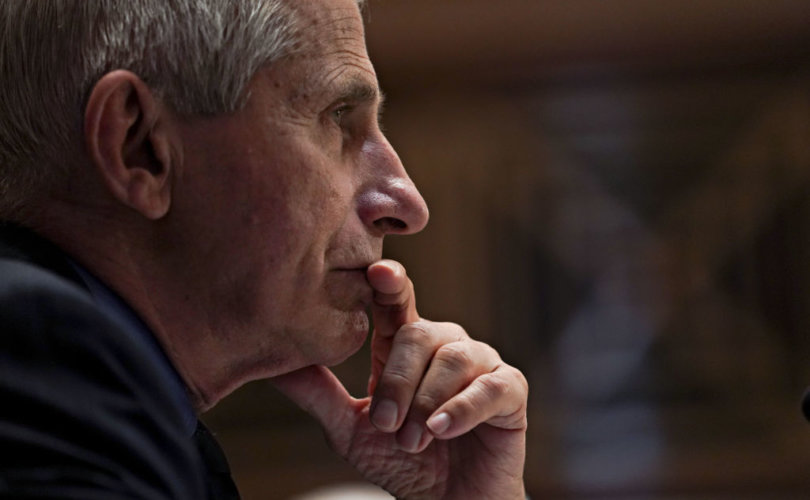 (U.S. Right to Know) – In the earliest days of the pandemic, Drs. Anthony Fauci and Francis Collins emailed about coronaviruses under study at the Wuhan Institute of Virology and about whether they had steered money to the lab, an email obtained by U.S. Right to Know shows.

Collins, then leader of the National Institutes of Health (NIH), and Fauci, leader of its infectious diseases institute, exchanged emails on February 1, 2020, about a preprint authored by Zhengli Shi, director of the Wuhan Institute of Virology’s Center for Emerging Infectious Diseases. The preprint described bat coronaviruses under study at the lab, including a coronavirus 96 percent genetically similar to the coronavirus that causes COVID-19.

The emails show that Collins and Fauci were concerned about links between the Wuhan Institute of Virology and NIH.

“In case you haven’t seen this preprint from one week ago,” Collins said in a February 1, 2020, email to Fauci. “No evidence this work was supported by NIH.”

“I did see it, but did not check the similarities. Obviously we need more details,” Fauci replied, a little before noon.

Some details of the short exchange are redacted.

The email shows that these concerns were top of mind at a critical time.

About two hours after the email exchange, Collins and Fauci would join a secret teleconference with a group of virologists who were closely examining the novel coronavirus. The teleconference touched off a high profile push to discredit the lab leak hypothesis.

The revelation that Collins and Fauci were discussing whether NIH had funded work on coronaviruses similar to SARS-CoV-2 at the Wuhan lab in the hours before suggests that politics may have been at play.

Those virologists’ claims that the virus could not have been engineered may have been influenced by Collins and Fauci. The NIH leaders may have sought to obscure links between federal funding and coronavirus research at the advancing pandemic’s epicenter. The emails raise questions about these virologists’ assurances that their deliberations were apolitical.

An analysis that framed the teleconference was called “Coronavirus sequence comparison[1].pdf.” This document has apparently not been released to the public, so it’s not clear which coronavirus they were comparing to COVID-19.

But it’s clear from notes exchanged after the call that an analysis comparing the spike proteins of SARS-CoV-2 and RaTG13, the Wuhan Institute of Virology coronavirus with a 96 percent identical genome, had been performed.

The February 1 teleconference kicked off the drafting of an influential correspondence arguing against the idea that SARS-CoV-2 had been engineered.

“The proximal origin of SARS-CoV-2” in Nature Medicine claimed “strong evidence that SARS-CoV-2 is not the product of purposeful manipulation.”

It has been cited in 752 media outlets.

Collins and Fauci were repeatedly updated on its drafting and provided “advice and leadership.”

While not disclosed, the participation of NIH’s leaders in drafting the correspondence presented a conflict of interest.

Because while Collins had concluded that NIH did not support that particular study, the agency had indeed funded the Wuhan Institute of Virology for coronavirus work, including the engineering of chimeric viruses that combine components of multiple viruses to make them more infectious to human cells.

Fauci had been alerted days before that his institute, the National Institute of Allergy and Infectious Diseases, supported a “virus hunting” non-profit called EcoHealth Alliance with a grant called “Understanding the Risk of Bat Coronavirus Emergence” and that the Wuhan Institute of Virology was a collaborator, according to an email shared with U.S. Right to Know by the House Committee on Oversight and Reform.

Their concerns might have been aggravated further when lead authors of “The proximal origin of SARS-CoV-2” shared concerns that the genome of SARS-CoV-2 appeared “inconsistent with expectations from evolutionary theory.”

The virologists’ concerns about features of the virus that appeared engineered were shared with Collins and Fauci on January 31, 2020, and again on February 2.

The preprint authored by Shi about viruses related to SARS-CoV-2 – including RaTG13 – would eventually be published in Nature and continued to trouble the NIH leaders.

An addendum was added months later clarifying that miners had become sick and died after visiting a cave in Yunnan Province in 2012 where RaTG13 was found after independent researchers uncovered this information, despite RaTG13 being named something else in the earlier literature, stoking suspicions of obfuscation.

In August 2020, Collins emailed his predecessor Harold Varmus, former director of the NIH, about an article describing NIH’s pressure on EcoHealth Alliance to provide records about the Wuhan Institute of Virology, and another link to an article calling attention to the fact that RaTG13 was identical to the coronavirus that had sickened the miners and postulating a lab origin of SARS-CoV-2.

“Tony and I would like the chance to speak to you about this,” he wrote.

Despite stepping back from their roles at NIH, both Collins and Fauci could be called to testify about the origins of COVID-19 if Republicans win a majority in either chamber of Congress this fall, according to Republicans poised to wield the gavel in key committees.

The new emails in this report were obtained from a Freedom of Information Act request to the National Institutes of Health.

Reprinted with permission from U.S. Right to Know.