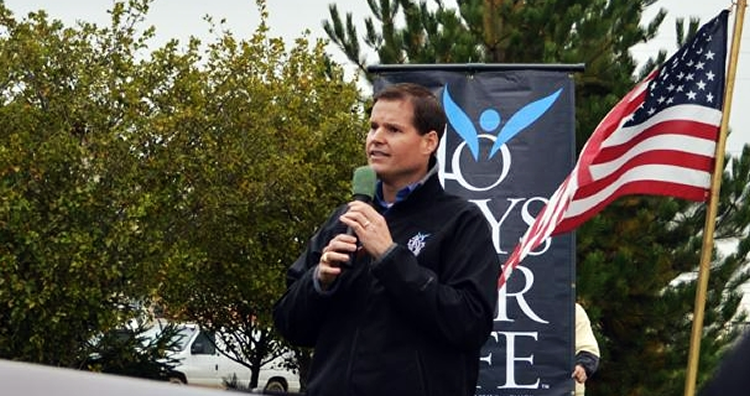 ONTARIO, October 30, 2017 (LifeSiteNews) — The American president of 40 Days for Life blasted the Ontario government for criminalizing pro-life speech and expression outside the province’s eight abortion centers.

“I think it’s just a total disgrace what the government is doing there,” Shawn Carney told LifeSiteNews.

“It’s truly and authentically oppressive,” he added. “Nobody benefits from this, the pro-abortion people and the pro-life people. This is what we ought to be unified on, freedom of speech.”

Ontario’s lawmakers passed Bill 163 last week by a vote of 86 to one.

The Bill is more restrictive than similar legislation in BC, Quebec, and Newfoundland in that it automatically establishes ‘bubble zones’ outside the province’s eight abortion facilities in which all pro-life activity — including “disapproval” of abortion — is outlawed. The bill also automatically establishes 150-meter zones around the homes of abortion doctors and abortion facility staff.

Bill 163 allows hospitals, pharmacies and other healthcare facilities that do abortions, including dispensing the abortion pill, to apply for ‘bubble zones’ banning all pro-life activity of up to 150 meters.

Attorney General Yasir Naqvi, who introduced the bill, told the Toronto Star Wednesday his office has to finalize regulations on the bill before it can be implemented and enforced.

Carney says he’s advising volunteers to follow directives from local leaders for the remainder of the campaign.

“Basically what we’re telling them is to keep going,” he told LifeSiteNews. “They’re going to have to observe the laws wherever they are.”

It’s advising 40 Days for Life volunteers to carry on as usual, based on Naqvi’s public statements.

LifeSiteNews contacted Naqvi’s office but did not hear back by deadline.

The attorney general earlier said he introduced the bill at the request of Ottawa mayor Jim Watson, an abortion advocate.

Naqvi said during debate on Bill 163 he thought there were injunctions banning pro-life activities outside abortion centers.

But a 1993 injunction brought in by the NDP government against 18 named pro-life defendants and “John and Jane Doe” lapsed in January under new regulations to clear out inactive cases.

The attorney general’s office has applied to reinstate the 24-year-old injunction, but it’s not clear if it will pursue this now Bill 163 is in place.

Mayor Watson had been heavily lobbied by the Ottawa Morgentaler abortion center and Planned Parenthood Ottawa, which alleged pro-life protestors were harassing and intimidating women as they approached the abortion facility, including a report that someone spat on a woman.

Of 64 police reports on calls from the Ottawa abortion center between January 2014 to June 2017, only two were characterized as “level 1” assaults, that is, assaults with minor or no injury.

“It is unknown if the assaults were perpetrated against pro-life or against pro-choice people,” Maloney noted. No charges were laid.

Abortion advocates describe pro-life witness as “intimidating” because “they just disagree with us,” observed Carney.

“We’ve had so many moms in Canada choose life and respond to the vigil. This idea that somehow we’re hostile is just an excuse because they don’t like us.”

He described Ontario’s bill as “an embarrassment to Canada,” where “they’re becoming experts at killing freedom of speech.”

The bill also “highlights the great courage of the pro-lifers in Canada,” Carney told LifeSiteNews.

“They have it very tough. … They just keep going and their government is completely out of touch with giving citizens a voice.”

Added Carney: “I don’t know where all the liberals are, but this is why we need liberals: to protect the voice of minorities and to protect their freedom of speech.”

Ontario’s three major parties agreed to fast-track the bill, with the only dissenting vote cast by independent MPP Jack MacLaren, a member of the Trillium Party.

Tory MPPs Bob Bailey and John Yakabuski, hitherto considered pro-life, voted for the bill on second and third readings and so have been given a “red-light” rating as unsupportable by Campaign Life Coalition.

Similarly, PC MPP Rick Nicholls, though absent for the final vote, has been red-lighted for voting for the bill on second reading.

Liberal MPP Lou Rinaldi has also been red-lighted for voted for the bill at both second and final reading.

“Canada already has the world’s most extreme abortion license, with abortion on demand legal for any reason at any time,” he wrote in the National Post.

“But the totalitarian impulse seeks to enforce approval, or at least criminalize dissent,” noted de Souza, editor-in-chief of Conviviuum magazine.

The bill “makes illegal any ‘act of disapproval concerning issues related to abortion services, by any means, including oral, written or graphic means’ within 50 metres of a clinic (or other permitted distances, not exceeding 150 metres),” he wrote.

“As written, having a conversation a few blocks away from an abortion clinic that the state deems insufficiently enthusiastic about abortion could make you liable to prosecution,” de Souza noted.

“A wise citizen is wary when all parties in the legislature agree upon something,” he added. “Usually it’s time to watch your wallet. And your fundamental freedoms.”