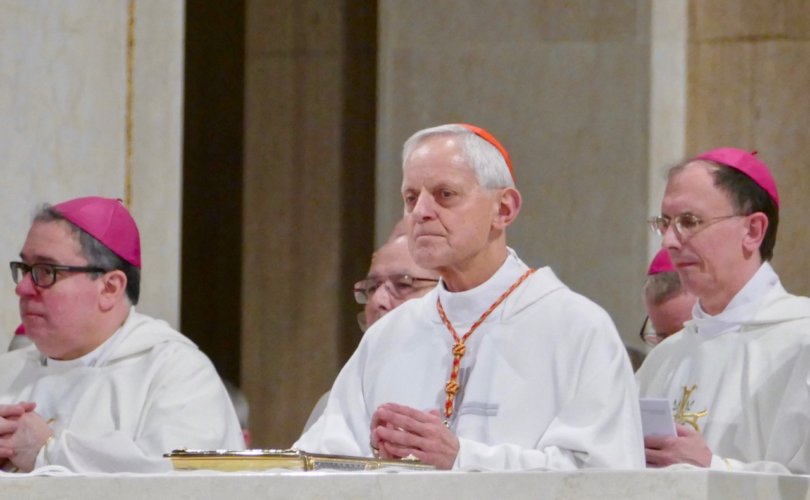 WASHINGTON, D.C., September 13, 2018 (LifeSiteNews) – Cardinal Donald Wuerl has indicated that he will soon travel to Rome to ask Pope Francis to accept his resignation as Archbishop of Washington, D.C.

“In his Sept. 11 letter to priests,” reads a tweet from the Archdiocese of Washington, “Cardinal Wuerl shared that the best way to serve the Church as it moves into the future will be to meet soon with Pope Francis to request that he accept his resignation that was submitted three years ago.”

In his Sept. 11 letter to priests, Cardinal Wuerl shared that the best way to serve the Church as it moves into the future will be to meet soon with Pope Francis to request that he accept his resignation that was submitted three years ago. https://t.co/mBlGHEBcef

As is customary when Catholic bishops turn 75 years old, Cardinal Wuerl tendered his resignation nearly three years ago, but the Pope did not accept it at that time.

Last week, the embattled prelate acknowledged the growing number of calls for him to resign – some emanating from his own clergy – but had stopped short of saying he was ready to step down.

In recent weeks, the cardinal has faced a barrage of allegations that he mishandled and covered up instances of criminal sexual abuse by priests while he was bishop of Pittsburgh.

In the aftermath of the release of the report, Pennsylvania Attorney General Josh Shapiro accused Wuerl of lying about his involvement, saying that Wuerl’s assertions that he “acted with diligence” were “misleading statements” furthering the cover-up.

Wuerl’s credibility first came into question when he declared that he knew nothing of the abuse settlements paid to sex abuse victims of his predecessor, disgraced former Cardinal Theodore McCarrick.

The Vatican’s former ambassador to the United States, Archbishop Carlo Maria Viganò, then released a scathing testimony which detailed Cardinal Wuerl’s complicity in the McCarrick cover up.

The cardinal’s “recent statements that he knew nothing about it,” said Viganò, “are absolutely laughable. He lies shamelessly.”

In a more recent letter addressed to the priests of Washington, D.C., Wuerl indicated that he intends, “in the very near future, to go to Rome to meet with our Holy Father about the resignation I presented nearly three years ago, November 12, 2015.”

“It was clear that some decision, sooner rather than later, on my part is an essential aspect” of moving forward, the letter said.

On Monday, September 3, prior to our annual Labor Day gathering, we had an opportunity to pray together and, as I was asked by our Holy Father Pope Francis, to discern the best course of action for me to pursue as we face new revelations of the extent of the horror of the clergy abuse of children and the failures in episcopal oversight. At issue is how to begin effectively to bring a new level of healing to survivors who have personally suffered so much and to the faithful entrusted to our care who have also been wounded by the shame of these terrible actions and have questions about their bishop’s ability to provide the necessary leadership.

It was clear that some decision, sooner rather than later, on my part is an essential aspect so that this archdiocesan Church we all love can move forward. As a fruit of our discernment I intend, in the very near future, to go to Rome to meet with our Holy Father about the resignation I presented nearly three years ago, November 12, 2015.

Our discernment here, I believe, has indicated the way forward to bring healing and a new beginning at the service of this Church. I am particularly grateful for your patience and respect for this time of discernment.

I ask you please to include me in your prayers.