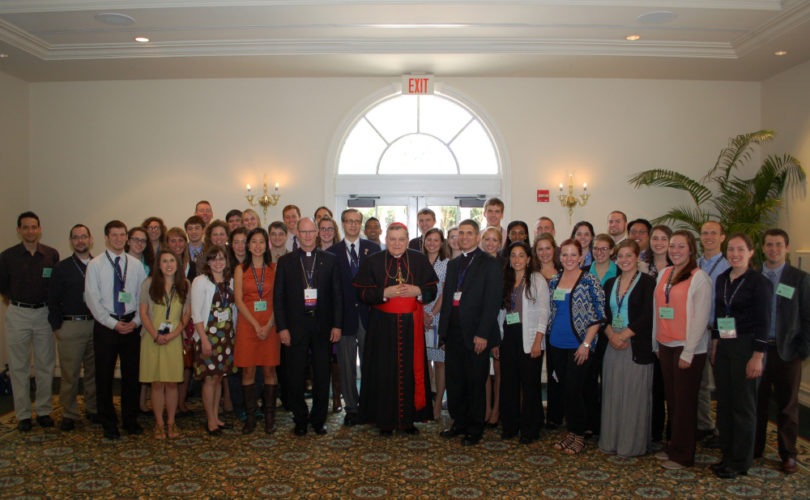 Cardinal Raymond Burke poses for a photo with members of the Catholic Medical Association.

Vatican Cardinal Raymond Burke, who is expected to be removed from his position as head of the highest court in the Catholic Church and put in a largely honorific position, is back in his homeland of America this week and if anything the appreciation for him has increased rather than waned.

Opening the Catholic Medical Association (CMA) conference in Orlando yesterday, the former Archbishop of St. Louis received a hero’s welcome with a standing ovation before he could say a word, and another standing ovation after his address.

Cardinal Burke was introduced by Dr. Peter Morrow, incoming president of the CMA and chairman of the conference. In his introduction Dr. Morrow explained how he had converted to Catholicism but hadn’t truly understood his faith until being introduced to Cardinal Burke through his involvement with the Marian Catechist Apostolate founded by Servant of God Fr. John Harden. He explained how meeting Cardinal Burke and hearing him talk about the faith brought him to a new and more profound understanding of his Faith, which changed his life. He referred to Cardinal Burke as his “spiritual father” in the Church.

With over 600 physicians and other guests in attendance, Cardinal Burke spoke of the challenges that faithful physicians and other health care professionals have in practicing medicine in today’s world. He highlighted the fact that they are on the front lines of the cultural war and how they need to be firm in their faith and stand strong to confront the evil.

In his homily, the cardinal stressed that the Church must never relinquish her mission of service to the sick and suffering, even if conscience demands she shut down her traditional health institutions.

The Church, he said, presents a crucial witness to authentic health care that respects the dignity of human life.

“Our country suffers the scourge of an attack on the dignity of human life and on the integrity of its cradle in marriage and the family,” he said. “Direct abortion on demand, the termination of the life of those who have special needs or are weakened because of illness or advanced years, and the pervasive view of the human body as a tool to be used for achieving maximum personal conve­nience and pleasure in life are some of the unmistakable signs of the deterio­ration and total loss of the respect for human life. The attempt to redefine marriage in violation of the moral law and the diffusion of the so-called “gender theory” represent the most grievous assaults on the integrity of marriage and the family.”

“Catholic health care, by its constant and careful attention to the perennial moral teaching of the Church, safeguards and promotes the respect for all human life from the moment of conception to the moment of natural death and for the integrity of marriage as the faithful, indissoluble and procreative union of one man and one woman,” he continued. “It stands as a beacon of light – the light of Jesus Christ – in a society which finds itself confused about the most fundamental truths, about the nature of human life and the vocation of man and woman in marriage.”

Throughout the day Cardinal Burke attended to long lineups vying for autographs upon purchasing the Cardinal’s book Divine Love made Flesh, The Holy Eucharist as the Sacrament of Charity. Following lunch Cardinal Burke was asked to pose for a picture with the more than 60 medical students attending the conference.

Dr. Morrow exclaimed as His Eminence departed: “Cardinal Burke’s participation and presence with us here this year will remain vibrant in the Catholic Medical Association for many years to come.”

The CMA’s 2014 annual educational conference continues until Saturday.  The conference is “exploring the grave threats posed by a radical and progressive secularization of society and its impact on the profession of medicine.”