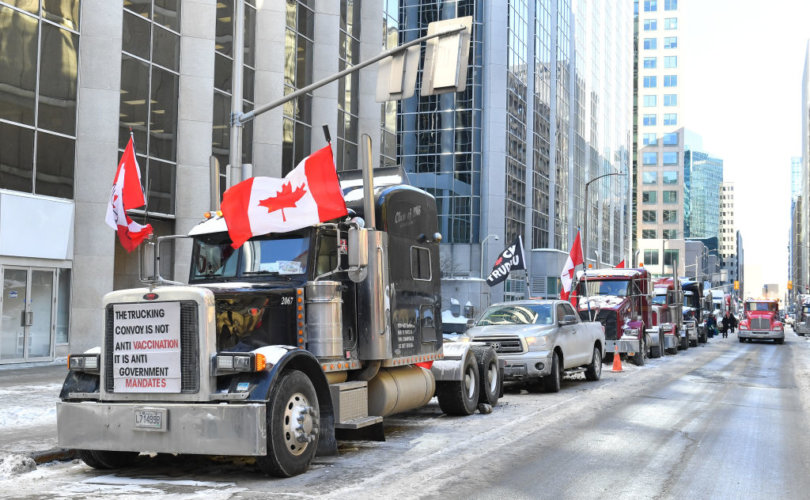 OTTAWA (LifeSiteNews) — As the hearings into Prime Minister Justin Trudeau’s use of the Emergencies Act against the “Freedom Convoy” begin, a convoy inquiry lawyer has said that contrary to the mainstream narrative, the demonstration was not instigated by external factors but was the natural result of a “mass protest movement” that began months earlier in response to COVID-19-related mandates.

“This report is intended to provide some high level context to the very detailed evidence we will hear in the coming weeks,” Stephen Armstrong, the counsel for the inquiry, told the Public Order Emergency Commission on Thursday, according to Blacklock’s Reporter.

“What this report describes is the development over time of what could fairly be described as a mass protest movement against COVID-related public health measures,” stated the lawyer, adding that the purpose of the inquiry is to uncover the truth.

“We’ve made an effort in this report to just stick to the facts, the raw facts, the places, the dates and numbers,” stressed Armstrong.

Counsel at the Commission have counted more than 140 major demonstrations and legal challenges nationwide that predated the arrival of the Freedom Convoy in February, suggesting the massive trucker rally was the “culmination” of an organic and “genuine” movement, noted Blacklock’s.

Despite the rising tide in anti-mandate sentiment in Canada that led up to the convoy, the Trudeau government and the state-funded mainstream media have continuously promoted conspiracy theories about the protest, suggesting the movement was propped up and funded by nefarious actors.

“There is concern that Russian actors could be continuing to fuel things as this protest grows. Perhaps even instigating it from the outset,” Canadian Broadcasting Corporation anchor Nik Koksal said in February.

“We’ve made an effort in this report to just stick to the facts, the raw facts, the places, the dates and numbers,” stressed the lawyer.

Trudeau’s government also made claims that the Freedom Convoy protesters were funded by foreign entities with ties to terrorist-linked financing, a statement that Canada’s official money regulator later admitted was false.