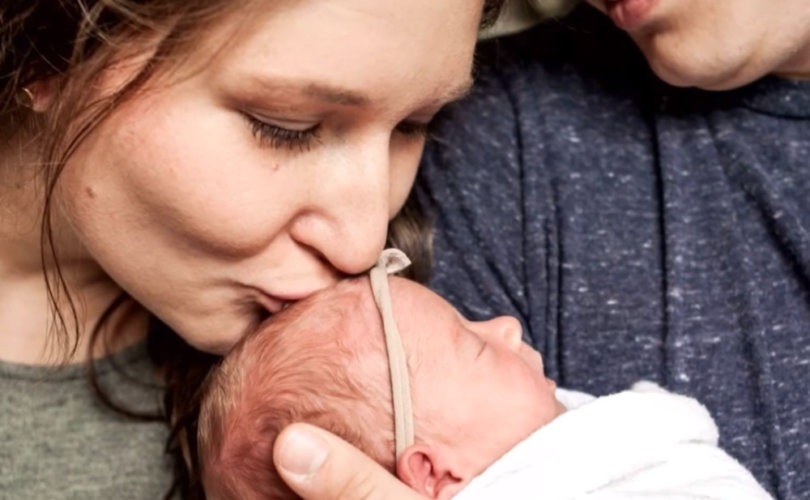 Baby Ruby Eekhoff with her parents

WAUKEE, Iowa, July 5, 2017 (LifeSiteNews) — Ruby Eekhoff is alive today thanks to her mom Emily and a smartphone application called “Count the Kicks.”

“Count the Kicks” enables moms to monitor the kicks and other movements of their babies in the third trimester. Emily Eekhoff found the app useful when she was pregnant with her son, Liam, and so the she downloaded it again when she was seven months along with her next baby.

From the 28th week on, the young mom used the app to make sure her baby was moving enough, counting several times a day to make sure there were many little kicks per hour. For five weeks, the baby kicked up a storm. But during Week 33, the app noted that the baby wasn’t moving as often as usual. That made Emily nervous.

“Normally, any time I would sit she would start to get active and usually I could get 10 kicks in under 10 minutes,” she told Inside Edition. “Lunch time I tried to do a count and sitting down I got maybe three kicks in a half hour, which was unusual for sure.”

Emily went to Mercy Hospital in Des Moines and discovered that her baby was in trouble. An umbilical cord had wrapped itself three times around the infant’s neck. Little Ruby was promptly delivered by an emergency C-section. Emily credits the app for saving her baby’s life.

The “Count the Kicks” app was invented by five Iowa mothers who each lost a baby daughter to stillbirth  (infant death). Janet Peterson, Jan Caruthers, Tiffan Yamen, Kerry Biondi-Morlan and Kate Safris are now stillbirth prevention activists. Together, they established “Healthy Birth Day,” a non-profit organization dedicated to teaching pregnant women to monitor the movements of their babies.

Ruby is now a month old, doing well, and a cellphone celebrity as media spread the word that if you want to monitor your unborn baby’s health, there’s an app for that.