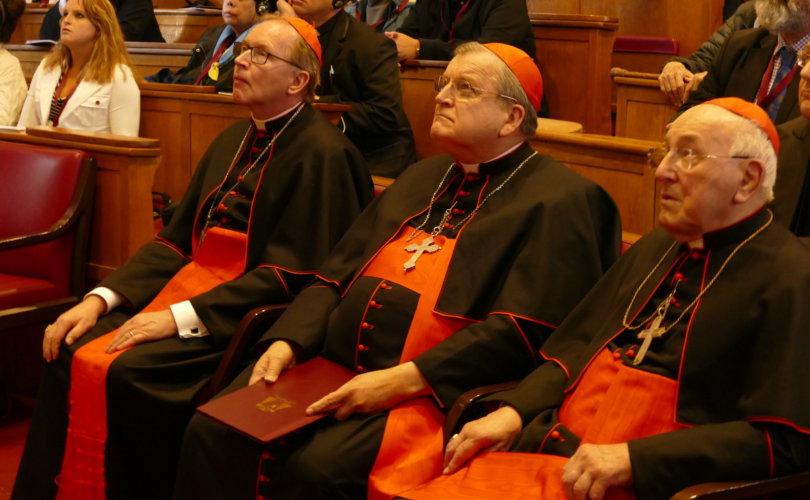 ROME, May 17, 2019 (LifeSiteNews) — Catholics from more than 30 countries descended upon the historic Pontifical University of St. Thomas Aquinas in Rome the past two days for the highly anticipated sixth annual Rome Life Forum, hosted by Voice of the Family.

Capped with a talk delivered by His Eminence Cardinal Raymond Burke on the duties of Catholics to oppose “totalitarian” one-world government and large-scale Muslim immigration, the gathering featured lectures by some of the world’s top pro-life, pro-family Catholic clergy and laity.

Four cardinals in total, one by pre-recorded video, spoke to attendees, many of whom were experienced journalists, well known conservative Catholic commentators, and lifelong activists in the fight against abortion. LifeSite livestreamed the event and provided up-to-the-second updates on its Catholic Twitter account @LSNCatholic.

Both days began with well-attended morning masses at the university’s gorgeous Church of Sts. Dominic and Sixtus. The praying of the Veni Creator Spiritus (“Come Holy Spirit”) and Salve Regina (“Hail Holy Queen”) occurred in the conference hall as well. Many who attended the gathering told LifeSite they would be participating in the 2019 Rome March for Life, which will be held Saturday, May 18.

A particularly poignant moment occurred when a frail-looking Cardinal Walter Brandmüller, one of the signatories of the dubia, arrived Friday afternoon as Cardinal Willem Eijk of the Netherlands was leading conference goers in the rosary. Members of the press corps swarmed to take photos as Brandmüller, Eijk, and Burke seated themselves in the front row. Applause broke out on several occasions during the cardinals’ individual remarks.

The theme for this year’s conference was “City of God vs. City of Man — Global One World Order vs. Christendom.” It was co-sponsored by Associazione Famiglia Domani (Italy), Family Life International New Zealand, LifeSiteNews, Population Research Institute, and the Society for the Protection of Unborn Children (U.K.).

Below is a list of the speakers at this year’s Rome Life Forum. Click on the links to read LifeSite’s report about each of them. Presenters are listed in the order of their appearance at the conference.

His Eminence Willem Jacobus Cardinal Eijk (the Netherlands): Gender theory: a threat to the family and the proclamation of the Christian faith

John-Henry Westen (LifeSiteNews, Canada): Finding hope in the midst of the revolution

His Most Reverend Excellency, Bishop Athanasius Schneider: The hopelessness of the city of man without God (video address in English)

Anthony Murphy (Catholic Voice, Ireland): On faith, life and the family in Ireland — example from the west

Steve Mosher (Population Research Institute, USA): On faith, life and the family in China — example from the east

The Rev. Fr. Linus Clovis (Family Life International NZ): The reign of Mary — mirror of the City of God

His Eminence Janis Cardinal Pujats: On topical questions for the family and for the society (Video address)

His Eminence Raymond Leo Cardinal Burke: Filial piety and national patriotism as essential virtues of citizens of heaven at work on earth