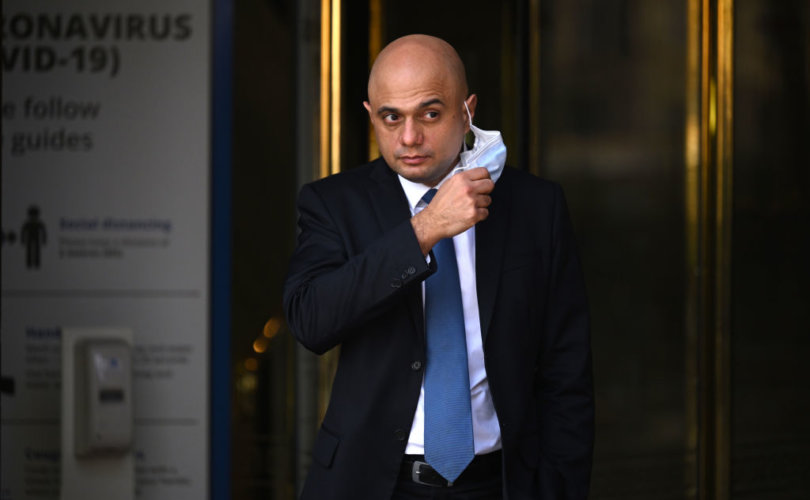 WESTMINSTER, U.K. (LifeSiteNews) — The U.K.’s Department of Health and Social Care (DHSC) has confirmed that it will scrap its much criticized COVID jab mandate for health and social care workers, as polling revealed 90% of people supported revoking the controversial policy.

In a press release sent out March 1, the DHSC confirmed that it would be revoking the legislation which the government had implemented November 2021, ordering that frontline National Health Service (NHS) and social care staff would be subject to a COVID-19 injection mandate.

“Regulations making COVID-19 vaccination a condition of deployment in health and social care will be revoked on Tuesday 15 March,” read the statement. Sajid Javid, the U.K.’s Health Secretary, confirmed to Parliament that the mandate which he had formerly defended would now be dropped, and previous legislation revoked:

I have concluded that it is right and proportionate to proceed with revocation of COVID-19 vaccination as a condition of deployment in all health and social care settings, and have today published the government’s full response to the consultation on GOV.UK.

Mandatory vaccination as a requirement for employment had been announced in November 2021, despite the government’s own assessment warning that over 100,000 unvaccinated healthcare staff could leave the already backlogged health service.

Javid doubled down on his mandate, warning that unvaccinated staff would be fired from as early as February 3, with staff required to be fully injected by April 1, 2022.

Following large-scale protests and repeated concerns over the effect the mandate would have on the health-care sector in general, the government announced a surprise U-turn to its mandate in late January, stating that the mandate would be placed under “review.” As part of the review, a two-week consultation was opened to the public, the results of which were published today.

Over 90,000 responses were received in the 8-day period the consultation was active with 90% of respondents supporting revoking the jab mandate. 84% of health-care workers polled were “highly likely” to support the mandate being dropped, the government said.

Javid alluded to these results when explaining removing his much touted mandate, saying that the DHSC had “carefully analysed the consultation responses.”

Nevertheless, Javid still strongly advocated vaccination for health-care staff, describing it as “a professional responsibility for health and care staff, and others who work in the health and social care sectors, to be vaccinated.”

In opposition to the mandate a group of NHS staff had been set up, called “NHS100k” after the amount of staff still predicted to leave over the mandate. The movement has been galvanizing NHS staff to wear a purple ribbon on their uniform to demonstrate their rejection of the jab mandate and lobbying to prevent the “catastrophic” effect the mandates would have on the health service.

The group welcomed the news, urging the many thousands who have already lost their jobs over the mandate to “reapply” and to seek “compensation” for any pensions which had been lost.

A revealing passage in the government’s consultation response noted that “the Omicron variant, relative to Delta, is intrinsically less severe and that a full primary course of an approved vaccine does not provide the intended longer-term public health protection against the spread of COVID-19.”

Yet official data from the U.K. show that COVID infections and deaths are far higher among the “fully vaccinated” and those who have take a booster than the unvaccinated. The un-jabbed account for just 559 of the 4,861 deaths associated with COVID-19 between January 24 and February 20, whereas 3,120 of those deaths were among the triple-jabbed and the remaining 1,182 deaths split between the single- and double-dosed.

The revoking of the mandates only applies to the NHS and healthcare staff in England.