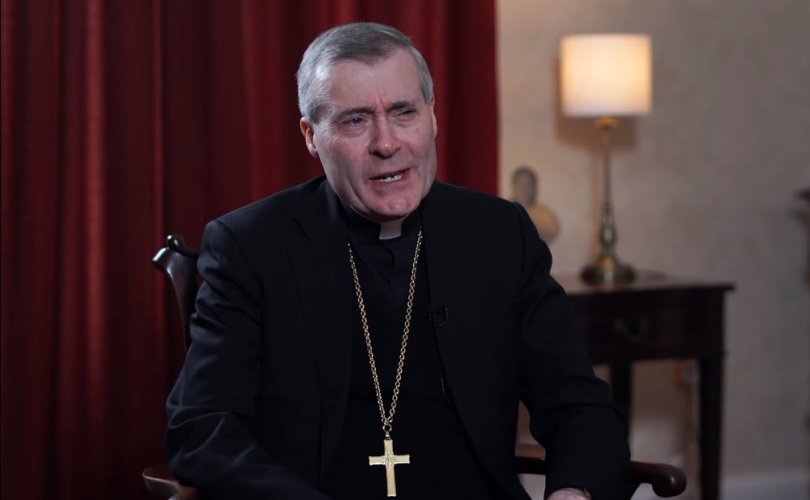 SHREWSBURY, U.K. (LifeSiteNews) — An English bishop has said that last rites should be recognized as an emergency service and priests should be granted access to crime scenes in the wake of the murder of Catholic MP Sir David Amess.

Last Tuesday, Bishop Mark Davies of Shrewsbury, western England, challenged the decision by Essex police to bar a priest from administering the last rites to dying Amess after the latter was stabbed to death in front of his constituents by a Somali jihadi last Friday. The bishop argued that “every Catholic Christian hopes to receive the Sacraments and be accompanied by the prayer of the Church in the final crisis of our lives.”

Davies insisted that “every believing Catholic desires to hear Christ’s words of pardon and absolution for the last time; to be strengthened by the grace of anointing; accompanied by the assurance of the Church’s prayer and whenever possible to receive Holy Communion.”

“This is something well understood in hospitals and care homes, yet the events following the murderous assault on Sir David Amess suggest this is not always comprehended in emergency situations,” he continued.

The bishop of Shrewsbury then called for more awareness to be raised around the importance of the last rites to Catholics and argued that priests who come to administer the last sacraments should be treated on the same level as emergency services.

“I hope a better understanding of the eternal significance of the hour of death for Christians and the Church’s ministry as an ‘emergency service’ may result from this terrible tragedy. May Sir David rest in peace,” he said.

Sir David was stabbed multiple times in front of his constituents as he was holding a meeting in Belfairs Methodist Church in Leigh-on-Sea, Essex.

As news of the attack broke, a Catholic priest, Fr. Jeffrey Woolnough, the pastor of St. Peter’s Catholic Church in Eastwood, made his way to the crime scene in an attempt to administer the last rites to the dying MP.

Though a police officer relayed his request to enter the crime scene, the priest was not granted access and led a public recitation of the rosary outside the police cordon instead.

“If I can’t go in, then Our Lady has to go in,” the priest told LifeSiteNews.

Unfortunately, attempts by paramedics to stabilize Sir David did not succeed and at 2:39 p.m, Essex Police announced that he had died at the scene.

The decision by Essex police to deny access to a crime scene to a priest attempting to administer the last rites to a dying man has generated anger and outrage among the British Catholic community. Some took to Twitter to demand an explanation.

The Essex police has since published the following response, saying it is “of the utmost importance that we preserve the integrity of a crime scene and allow emergency services to tend to those in need.”

I wrote to Essex Police to ask if it is true that a priest was denied entry to Sir David’s crime scene to provide Last Rites; if so, why; and what is their general policy.

The reply, provided reasonably swiftly for what must be a burdened press office, is below. pic.twitter.com/Kl43VgH604

The police also argued that a cordon is put in place “to prevent contamination of the area” and “to ensure the best possible chance of securing justice for any victim and their family.”

For some, this explanation did not provide a satisfactory justification for the decision. This was the case for journalist Melanie McDonagh from The Spectator, who criticized both the decision not to allow Fr. Woolnough to enter the crime scene as well as the subsequent justification provided in the statement by the Essex police.

“It was precisely because of the nature of the scene – a potentially fatal stabbing – that a priest was necessary. It was because a man, known to be a Catholic, was facing death, that the priest should have been present,” McDonagh argued.

“For a Catholic, there is nothing, nothing, more important than being in a state of grace when you die and go to God,” she stressed.

The Irish journalist also insisted that, even though “it’s not known whether Sir David was alive when the priest arrived at the scene … he still should have been allowed through.”

McDonagh acknowledged that the situation must have been extremely difficult for the police to handle but maintained that the decision was an error of judgment.

“Of course, the police were dealing with a tremendously difficult situation and would have been shocked and confused – how could they not have been? – but it doesn’t excuse this failure of judgment, which we can assume stems from a failure of training,” she said.

McDonagh summed up the idea with the principle that “nothing should come between a dying man and the mercy of the Church.”

She also argued that whether or not the police share in the beliefs of the priest or the dying person is irrelevant in this case.

“You don’t have to share a belief in the efficacy of confession to go along with this; you just need a very elementary knowledge of and respect for the faith to refrain from standing between a confessor and a dying man, “she explained.

McDonagh also criticized Essex police for insinuating that priests are not equal to emergency services.

“The most troubling element of the statement is that the police wanted to ‘allow the emergency services to tend to those in need,’” she said.

“A priest is an emergency service.”

Since Sir David’s death, similar appeals have been made, including in Parliament:

Speaking in the House of Commons last Tuesday, Catholic MP Mike Kane called for an “Amess amendment” to be passed that would guarantee priests access to those requiring last rites.

“While I have the attention of those on the Front Benches, Catholics believe that extreme unction helps guide the soul to God after death, so maybe we could come up with an Amess amendment so that no matter where it is, in a care home or at a crime scene, Members, or anybody, can receive that sacrament,” he said.