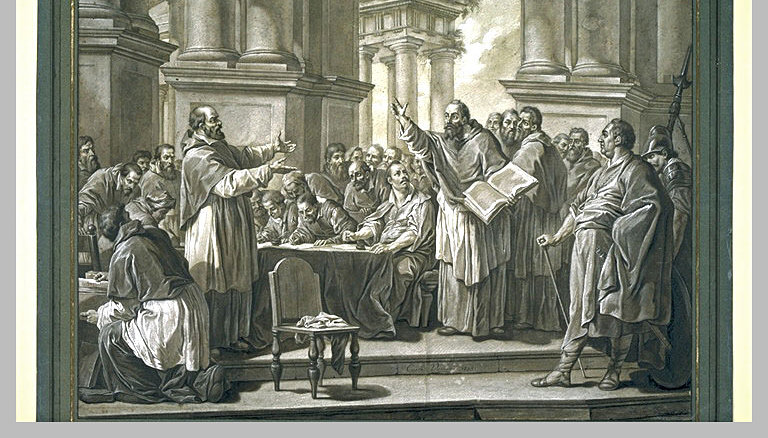 At almost the same moment that Cardinal Raymond Burke said in an interview that those defending Catholic moral teaching – and the practice of barring people in irregular sexual unions from receiving Communion – are being marginalized within the Church, the Catholic bishops of England and Wales have issued a document for clergy that all but accuses such Catholics of the ancient Donatist heresy.

In a “Reflection Document for Clergy,” the English bishops appear to follow the line of Cardinal Walter Kasper and his followers, saying, “It is not for us to make rash or premature conclusions” about people living in sexual sin.

“We meet people at many different stages of family life which are often not clearly defined in this way nor do they occur in the ‘traditional’ order in which we used to think,” they said.

The bishops go so far as to issue a thinly veiled accusation of heresy against those, like Cardinal Burke, the head of the Congregation for the Doctrine of the Faith, Cardinal Gerhard Muller, Cardinal George Pell and others, who have refused to follow the Kasper line. The document quotes St. Augustine of Hippo, the 4th century Doctor of the Church, who the bishops say “offers us a way of looking at the Church from his age which is still relevant today.”

St. Augustine wrote about the problem faced by the Christian community at the end of a period of persecution under the Emperor Diocletian. The saint recommended clemency and absolution for those who had repented of having publicly denounced their faith in Christ under threat of death. This was in opposition to the Donatist faction who held that repentance was impossible and favoured excommunication.

“The followers of Donatus wanted no contact whatever with Catholics whom they believed were contaminated and could not represent the Church of Christ. They considered themselves the sole representatives of the true Church because of their steadfastness during the persecution,” the English bishops write.

“St. Augustine maintained that good Catholics would not be affected by sinners provided they did not imitate the behaviour of such people,” the document continues.

“The Church is called to proclaim the peace of Christ to his people, and to the world. People need and want to hear this proclamation, in their often confused and fragmented lives,” it says.

Controversy continues to swirl around the Catholic world over the so-called “Kasper Proposal” to abandon the Church’s practice of withholding Communion from those in publicly “irregular” sexual situations, with the irreconcilable sides lining up in a conflict that is likely only to escalate over the next year before the Synod of Bishops in 2015.

The Church, based on the words of Christ himself in the Gospels of Luke and Matthew, does not recognize the existence of divorce and holds that any person who “remarries” after a civil divorce is in a state of adultery. In fact, anyone engaging in any kind of sexual activity outside of marriage, including homosexual activity, is barred until they have repented, which the Church has always understood to require a change in their behaviour.

Cardinal Kasper and his followers have insisted, however, that maintaining the Church’s perennial discipline is a sign of a lack of “mercy,” and frequently cite the modern situation of widespread divorce as a justification. Others in a similar vein argue that allowing such people to receive Holy Communion, after a “period of penance,” would, according to the “principle of gradualism,” eventually convince them to marry or otherwise regularize their sexual lives within the Church.

In their Reflection Document, the English bishops said that the documents of the 2014 Synod call for clergy “to echo Jesus’ own approach” to the “messiness of family life in the contemporary world.”

“In a rapidly developing world, particularly where moral autonomy is concerned, we need patience and tolerance before clarity and truth emerge in people’s lives,” they said.

The two documents issued by October’s Synod have been heavily criticized by many who have said they are an attempt by a “progressivist” faction to steer the Church away from her traditional moral teaching on sex. Cardinal Burke in his interview with Le Figaro said that the contentious mid-term Relatio appeared to have been written before the Synod fathers had even begun to debate the various issues.

That mid-term Relatio, understood to have been written by the Italian liberal theologian, Archbishop Bruno Forte, called for the Church to change its practice, and to “accept and value” the homosexual “orientation,” an issue that had not even been part of the Synod bishops’ discussions. Cardinal Burke commented that homosexuality “has no relation with the question of marriage.”

At the end of their document for clergy, the English bishops ask their priests a series of questions about their pastoral practice at the parish level. They ask whether people in “second unions” in their parishes “come to the sacraments?”

“How do you help them to approach the marriage tribunal? Are there cases where you think they might be welcomed to Holy Communion even though their objective situation has not been remedied?”

On people with same-sex attraction, the document says, “The Church accepts people who are attracted to others of the same-sex whilst not reducing their identity to this single aspect, and calls them to chaste friendship.”

“How do you minister to those people who have homosexual tendencies and help them to integrate their sexual orientation? What is your approach when people who are in same-sex partnerships approach the Church for welcome and inclusion?”

‘Gay Catholic’ groups converge on Rome for Synod on the Family

The Synod on the Family must be a source of clarity, not confusion
UK bishop hopes for ‘radical re-examination of human sexuality’ at synod on the family