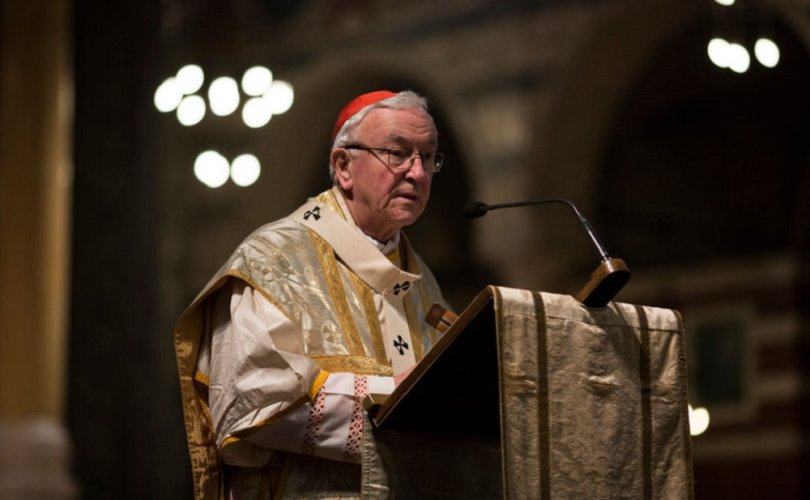 LONDON, United Kingdom, September 14, 2020 (LifeSiteNews) — A coalition formed in defense of parental rights has written to England’s senior bishop urging him to reverse the Bishops' Conference’s policy of supporting the government's pro-LGBT, pro-contraception, and pro-abortion “Relationships and Sex Education” legislation, made compulsory in all schools across England.

Leaders of three distinct national organizations — The Society for the Protection of Unborn Children (SPUC), The Latin Mass Society (LMS), and Catholic Man UK (CMUK) — joined as a newly formed “Coalition in Defence of Primary Educators” to deliver the letter in person to Archbishops’ House at Westminster Cathedral this past Saturday, the residence of Cardinal Vincent Nichols, Catholic archbishop of Westminster. A full copy of the letter can be found at the coalition’s website.

James Leatherland of CMUK; Dr. Joseph Shaw, chairman of the LMS; and John Smeaton, CEO of SPUC (and father of the author of this article) — all of whom head Catholic families — knelt and prayed the rosary in the piazza of Westminster Cathedral prior to making the delivery. At least one senior English Catholic cleric is known to have been in the piazza while they prayed, who told them he was en route to a meeting with Cardinal Nichols.

“We write to you, as Catholic fathers, with the responsibility for the moral education and spiritual formation of our children, regarding the British government’s legislation imposing pro-LGBT Relationships and Sex Education on school-children in England,” the letter begins.

It is shocking and deeply troubling to us that the Catholic Bishops’ Conference of England and Wales (CBCEW), of which you are President, have consistently and publicly supported legislative changes and RSE policy which now denies parents the right to remove their children from Relationships and Sex Education, and that, on your behalf, the Catholic Education Service (CES) has wrongly stated that the Government is committed to protecting the parents’ right to withdraw their children from the new subjects. In fact, parents have the right, only, to ‘request’ withdrawal from the (undefined) ‘sex education’ parts of RSE, with the final decision to be made by the head teacher.

The signatories outline in their letter to Cardinal Nichols that the regulations for the legislation say that “[c]hildren should be provided with ‘the facts about the full range of contraceptive choices and options’ and signposted as to where and how to obtain abortion and contraception services without parental knowledge or consent.”

Citing the government’s statutory guidance for schools, the signatories further point out that “LGBT content is expected, ‘at a timely point’, to be ‘fully integrated’ into the children’s programme of study, which should present homosexual relationships and family structures in a positive manner” and that real marriage, between a man and a woman, is “simply presented as one possible relationship option.”

But due to the extensive disruption caused by the coronavirus crisis, schools have now been given the permission to delay the full implementation of the new legislation until the summer term 2021.

Under the new legislation, the relationships education will be compulsory in all primary schools, but parents will be able to withdraw their children in primary school from sex education classes.

Relationships and Sex Education (RSE) will be compulsory in all secondary schools. Parents will not be able to withdraw their children from RSE at secondary school, but will only be able to request that their children be withdrawn from the sex education parts of RSE, with the final decision being given to the headteacher. From age 15, the child has the right to override any parental request that he be withdrawn from sex education.

Prominent LGBT activist Peter Tatchell has said that requiring parents to pick their children up from school would be an effective way to stop them from exercising their right to withdraw children from sex education lessons and that this has already been done in at least one part of the U.K.

“This programme and its guidelines are clearly incompatible with Catholic teaching. The bishops of England and Wales have not been proactive in responding to this incompatibility,” Shaw said in an interview at the event.

Leatherhead explained that after writing to his local bishop, Bishop David Oakley of the Diocese of Northampton, he received a reply from Bishop Oakley in support of the new legislation.

“He’s sent a response which basically says that Church schools have been teaching sex education the whole time and that they believe that what they are doing is in accordance with Church teaching and that the current legislation doesn’t impinge on the rights of parents of those children.”

But the letter to Cardinal Nichols also details how the Bishops’ Conference itself, particularly through the work of the Catholic Education Service (CES), has itself published pro-LGBT education guides.

“Learning to Love (2017), for example, an RSE guide for Catholic educators, published by the CES on behalf of the CBCEW, offers what it calls its own ‘fresh description’ of the Church’s teaching, referring to same sex relationships as being able to constitute a ‘powerful’ and an ‘exalted form of love’ on a par with that between husband and wife in marriage,” the signatories note.

“The social, spiritual and psychological impact of natural fathers abandoning their families is overwhelming society and human individuals today,” Smeaton said in an interview after the event. “And the social, psychological and spiritual impact of our spiritual fathers abandoning our children to the corrupt ideological agenda of the British government with its pro-LGBT Relationships and Sex education is even more overwhelming.”

Moreover, the letter mentions, in brief, the extensive record of Cardinal Nichols, other bishops, and the CES of facilitating access to abortion and contraception, as well as the promotion of LGBT issues at Catholic schools.

“[U]nder your [Cardinal Nichols’s] chairmanship, the CES developed a policy that resulted in providing children in Catholic schools, including adolescents under the age of consent, with access to abortion and contraception services, without parental knowledge or consent via the Government agency Connexions,” the signatories write.

“More recently in 2019, in the archdiocese of Liverpool, No Outsiders, an RSE programme written by homosexual activist Andrew Moffat MBE, has been described as ‘fine to use in school’.”

The signatories explain in their letter that they are praying for the bishops and ask them for their prayers also.

“Before delivering this letter to you today, we knelt and prayed the Rosary for you on the Piazza in front of Westminster Cathedral. We, and the members of the groups which we lead, most of them parents like ourselves, are praying and offering sacrifices for you and for your brother bishops in England and Wales, and we respectfully ask you to pray for us,” they explain.

“As parents, we share with you, our bishops, the certainty that, on Judgement Day, we will be accountable to God for the eternal souls of the children in our care, and not to the Government for the implementation of their ideological and corrupt agenda,” they continue.

“Above all our prayer is that the Catholic Bishops of England and Wales, endowed with the authority of Christ to teach the Catholic faith, will change direction and lead parents in Britain, both Catholic and non-Catholic, in resisting legislation which threatens the immortal souls of our nation’s children.”