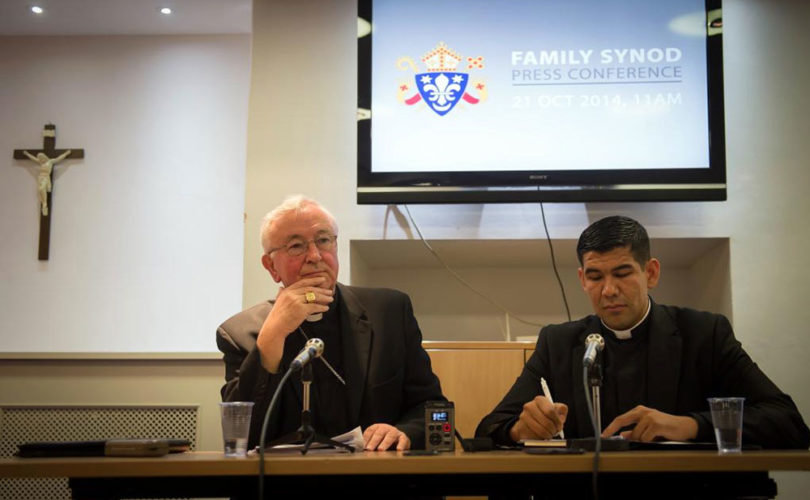 UNITED KINGDOM, July 11, 2016 (LifeSiteNews) — Cardinal Vincent Nichols has told priests in his diocese not to “exercise personal preference or taste” by offering Mass facing east, after the Vatican’s liturgy chief called for the return to the practice of celebrating masses “ad orientem” earlier this month.

Nichols wrote to priests, quoting from The General Insruction of the Roman Missal, which states, “The altar should be built apart from the wall, in such a way that it is possible to walk around it easily and that Mass can be celebrated at it facing the people, which is desirable wherever possible.”

While the GIRM indicates certain times during Mass when the priest is to face the people, it does not dictate the direction in which Mass must be celebrated.

The Vatican had responded to controversy on the question in 2000, when Cardinal  Jorge A. Medina Estévez, then the Prefect of the Vatican’s Congregation for Divine Worship, had written: “No preference is expressed in the liturgical legislation for either position. As both positions enjoy the favour of the Law, legislation may not be invoked to say that one position or the other accords more closely with the mind of the Church.”

Nichols’s insistence that the Mass not be subject to priests’ personal preferences is surprising given his and his archdiocese’s history with LGBT liturgies, which are not sanctioned by the Church.

Nichols wrote that Mass is not the time for priests to “exercise personal preference or taste,” and “as the last paragraph of the GIRM states so clearly, ‘The Roman Missal, though in a diversity of languages and with some variety of customs, must in the future be safeguarded as an instrument and an outstanding sign of the integrity and unity of the Roman Rite’ (399).”

On July 4, Cardinal Sarah, who heads the Congregation for Divine Worship, asked all priests and bishops to celebrate Mass ad orientem, the ancient liturgical practice in which the priest faces the tabernacle along with the congregation instead of facing the people. He also asked all Catholics to receive Holy Communion kneeling, which is the Church’s norm despite the allowances many western dioceses have to administer the sacrament in the hand. The cardinal also reminded priests that they are forbidden from denying the faithful Holy Communion because they choose to receive it kneeling.

“Kneeling at the consecration (unless I am sick) is essential,” he said. “In the West, this is an act of bodily adoration that humbles us before our Lord and God. It is itself an act of prayer. Where kneeling and genuflection have disappeared from the liturgy, they need to be restored, in particular for our reception of our Blessed Lord in Holy Communion.”

During the same talk, Sarah urged for the continuation of the traditional liturgical practices that Pope Benedict XVI revived, like Gregorian Chant, and reminded the faithful that the Second Vatican Council did not call exclusively for the use of the vernacular in the new Mass. The Second Vatican Council pronounces that Gregorian Chant should be given “pride of place” in the liturgy (Sacrosanctum Concilium 116).

“We must sing sacred liturgical music not merely religious music, or worse, profane songs,” Sarah said. “The Council never intended that the Roman rite be exclusively celebrated in the vernacular. But it did intend to allow its increased use, particularly for the readings.”

Sarah has said on multiple occasions that Pope Francis asked him to continue the liturgical work of Pope Benedict XVI.

Nichols has a history of making statements and acting in ways seemingly contradictory to the Catholic Church’s teaching on human life and human sexuality.

In 2008, he suggested to a BBC radio interviewer that embryonic human beings are not morally equal to adult human beings. “What we’ve been trying to say all along is ‘What is the value that we give to human life in its first beginnings?’ Now clearly it’s not the same as we would give to another adult sitting next to me,” Nichols said.

The Catechism of the Catholic Church teaches: “Human life must be respected and protected absolutely from the moment of conception. From the first moment of his existence, a human being must be recognized as having the rights of a person — among which is the inviolable right of every innocent being to life” (CCC 2270).

In his encyclical Evangelium Vitae, Pope St. John Paul II wrote, “Human life is sacred and inviolable at every moment of existence, including the initial phase which precedes birth.”

In 2010, Nichols told the BBC that the British Catholic bishops had not opposed same-sex civil unions but approached the issue in a “nuanced” way without supporting same-sex “marriage.”

In 2011, Nichols praised civil partnerships for those in same-sex relationships. The UK-based publication The Tablet reported that Nichols said of civil unions:

“We would want to emphasise that civil partnerships actually provide a structure in which people of the same sex who want a lifelong relationship [and] a lifelong partnership can find their place and protection and legal provision.

As a Church, we are very committed to the notion of equality so that people are treated the same across all the activities of life. … The Church holds great store by the value of commitment in relationships and undertakings that people give. Stability in society depends upon the reliability of commitments that people give. That might be in offering to do a job but especially in their relationships with one another. Equality and commitment are both very important and we fully support them.”

Nichols’s insistence that the Mass not be subject to priests’ personal preferences is surprising given his and his archdiocese’s history with LGBT liturgies, which are not sanctioned by the Church.

LGBT Catholics Westminster is known for its pro-homosexual “SoHo Masses,” which are celebrated at a London Jesuit parish and regularly feature clergy who openly dissent from Church teaching on human sexuality, such as Father Timothy Radcliffe.

A video of one of the group’s liturgies shows a man wearing a dress and a wig reading from a lectern draped in a rainbow flag.

Nichols has also suggested that the Church could one day accept same-sex unions. After the 2014 Synod on the Family, Nichols implied that he was open to the notion of admitting to the Sacraments those living in situations the Church considers to be objectively sinful.