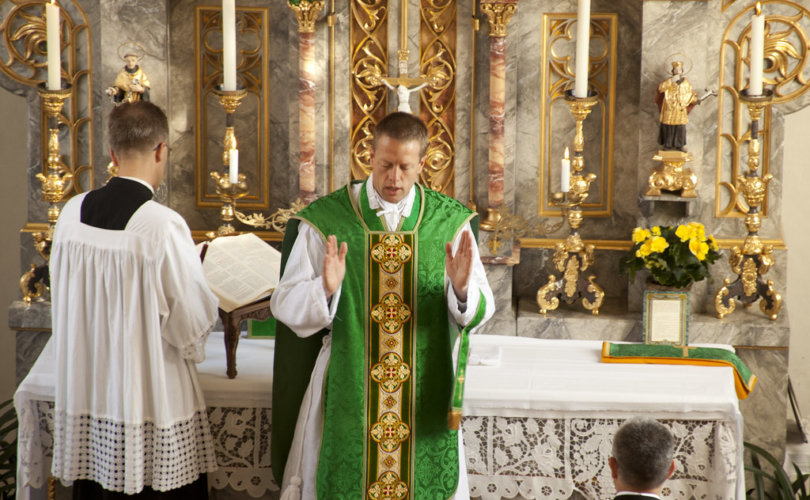 (LifeSiteNews) — An English priest has issued a blistering attack on Pope Francis and the Vatican hierarchy, saying that the Pope’s restrictions on the Latin Mass are an attack on “God’s revelation” and a rejection of Christ.

Responding to the pontiff’s July 2021 motu proprio Traditionis custodes, which ushered in sweeping restrictions on the traditional Mass, Fr. Mawdsley rebuffed the Pope’s claim that “the Novus Ordo constitutes the unique expression of the lex orandi of the Roman Rite.”

The Pope “impossibly claimed that the Novus Ordo constitutes the unique expression of the lex orandi of the Roman Rite,” declared Mawdsley.

As such, the former priest of the Fraternity of St. Peter (FSSP) stated that “it is important to withstand the Pope on this publicly.”

Fr. Mawdsley outlined three chief reasons for publicly resisting the Pontiff, the first being “to save his soul.” “King Herod was not a Christian when he wanted the infant Jesus put to death, and now, shall the Pope put Christ to death?,” he queried.

The 9-minute video was heavily supported by passages from Sacred Scripture, and Fr. Mawdsley drew from Matthew’s Gospel to explain his motive in speaking out publicly.

Quoting Matthew 18:15-17, Mawdsley said public intervention was necessary “as Francis has not backed away from this sacrilege” of restricting the Latin Mass.

“Countless Catholics were wounded by this beating from the Pope,” he said, adding that what was now exposed was the “hierarchy’s long attack on Tradition, because this didn’t begin with Francis.”

Ordained in 2016 in the FSSP’s seminary in Wigratzbad, Germany, Mawdsley left the FSSP recently “with the intention of speaking out.”

Speaking to The Remnant, Mawsdley said that his unannounced and unapproved departure from the traditional society of priests was “precisely to get a distance from the Fraternity, to be suspended, so that they can in truth say they are not responsible or accountable for the things I am saying.”

Similarly, he has not looked to be incardinated into any diocese, afraid that his presence and vocal criticism of the Pope would “bring trouble” to the local bishop. “There really are vicious men in the hierarchy who will unleash reprisals if they can find a target,” he said.

Don’t be ‘gaslighted’ by Papal ‘attack on Tradition’

Fr. Mawdsley, who previously spent 14 months in a Burmese prison for protesting against the nation’s human rights abuses, told viewers not to “be gaslighted” by the Pope’s “attack on Tradition.”

What is happening is evil beyond description. Sit back and consider it. The highest power on earth is attacking the greatest good on earth, precisely when it’s his job to defend and preserve Tradition and to pass it on to the next generation.

He also criticized Archbishop Arthur Roche, the prefect of the Congregation for Divine Worship and the Discipline of the Sacraments (CDW), for claiming in a recent interview that “the negative reaction to Traditionis Custodes has been very little.”

“What do you expect when a reign of terror is unleashed?,” Mawdsley questioned, describing Roche’s comments as almost entirely “untrue or misleading.”

Of course people are keeping their heads down. Many clerics will not say openly what they think, because they’re afraid of vicious reprisals.

Alluding to the numerous bishops who have begun restricting the Latin Mass only days after Traditionis custodes was published, Mawdsley observed that “the carnage has begun.”

“Truth is needed for spiritual health. Without truth we starve,” he said, highlighting the need to hear “bishops and cardinals” teach that “nobody has the right to attack tradition.”

Mawdsley, who has produced 15 videos since the start of the new year (all since leaving the FSSP), accused Pope Francis of “attacking God’s revelation,” which “should matter to everybody.” “To reject tradition is to reject Christ,” he said.

These words he echoed when speaking with The Remnant, saying that bishops who are “acting illegally in attempting to suffocate tradition,” are “betraying the mission which Jesus gave to the Church.”

He urged priests to “speak the truth without fear, otherwise we have nothing left.”

“The flock is starving,” he warned. “As all generations before us have passed on the Deposit of Faith, so for the sake of future generations we must not drop the ball. Or we must recover it. Without Tradition there is no future.”

Warning that the problems of the Church would not be solved automatically with the death of Pope Francis, Mawdsley highlighted Cardinals Parolin, Tagle, and Cupich as likely contenders to continue the “attack on tradition.”

Singling out Cardinal Cupich particularly, who implemented his own severe restrictions on the Latin Mass at Christmas-time, Mawdsley likened the Chicago prelate to “another Herod.”