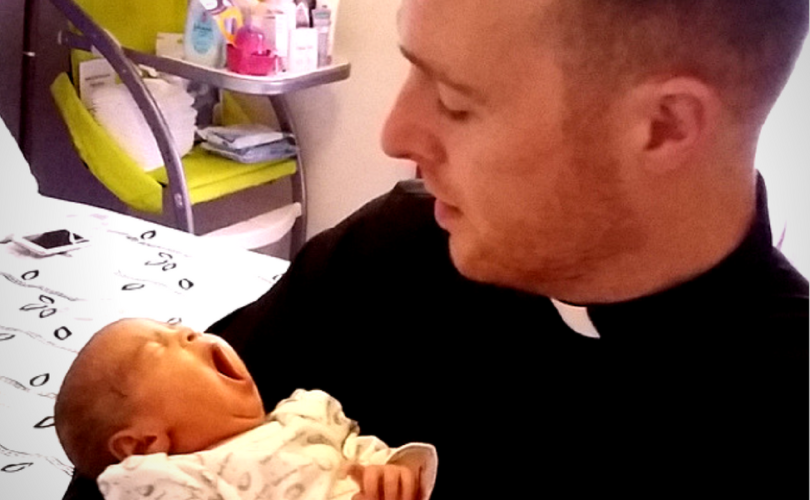 BIRMINGHAM, United Kingdom, September 11, 2018 (LifeSiteNews) – An English Catholic seminarian helped to save a baby at a 40 Days for Life vigil and then got to meet her.

Deacon David Donaghue, in his final year of studies, told LifeSiteNews via email that seminarians from Oscott College regularly take part in 40 Days for Life outside the Marie Stopes Clinic in Birmingham.

“We offer leaflets to men and women who enter the clinic,” he explained. “We fully respect those who decline, but many women and men do wish to talk.”

At last October’s 40 Days for Life, Donaghue approached a man outside Marie Stopes and began a conversation.

“His wife was inside the clinic organising an abortion,” the seminarian recalled. “It turned out that they were poor and with other children in the house, they [felt they] had no choice. I was able to affirm him in his fatherhood and offer help. This is where others come in.”

Donaghue stated that it was thanks to the “commitment and generosity” of donors to an English pregnancy support group that the couple got the help they needed.

“Because of the commitment and generosity of donors to the Good Counsel Network, they were able to offer financial and emotional support,” he said. “We are not just pro-birth, but pro-life.”

Donaghue said the “real work” was done by the local 40 Days for Life campaign coordinator, “who is an amazing person.”

“She rallied round the family and got donations of household items for them,” he explained. “Eventually they kept their baby and are very happy they did.”

But the relationship did not end there.

“The campaign coordinator is still in touch with them and is currently helping them to get the children school uniforms,” Donaghue said. “The family are doing well.”

“I had the privilege of visiting them recently and meeting the baby who was saved from abortion and they were pleased to see me,” he continued. “I hope to stay in touch, and I pray that she will be all that God wants her to be.”

“Her life is precious.”

‘My own vocation story is one of the prodigal son’

Donaghue told LifeSiteNews that he was inspired by the “great culture of life” he found at Oscott College in the “sound moral theology” taught there, guest speakers, and the seminarians and priests on staff who take part in 40 Days for Life.

The seminarian likened the story of how he came to attend Oscott College to that of the “prodigal son”:

“My own vocation story is one of the prodigal son, having lived a hedonistic life in my youth and early twenties,” Donaghue testified.

“I had my heart set on being a musician as I played in several bands. When one of my military friends was killed in Iraq, I searched for my rosary beads which I had not used since my childhood, but thanks be to God my grandmother had taught me the Holy Rosary and I was able to recite it straight off. From that day things began to change.”

Donaghue began to work in a psychiatric hospital, and the suffering he saw around him provoked questions for which he desired answers.

“I picked up the children’s bible as this was all I could manage, having been so spiritually drained by the culture that surrounds us,” he said.

“I began to rediscover Christ and his simple power,” Donaghue continued. “This began a long journey back and forth, but thank God for the mercy of God in the sacrament of confession. I discovered great chastity speakers such as Jason Evert and this was monumental for me…I had never heard the message – a message that truly set me free.”

The seminarian says that God has placed in his heart a desire to protect the dignity of human life and to proclaim the “beauty of the Church’s teaching on authentic love.”

He was fulsome in his praise for Oscott College, which he said supports this vocation with “sound doctrinal teaching and a solid pastoral programme.”

However, he’s had extra help from another source: Mary, the Mother of God.

“Since consecrating myself to her, I have more zeal for life, to speak the truth in love regardless of the cost,” said Donaghue.

As a conclusion to his statement to LifeSiteNews, Donaghue has a request for readers:

“Please pray for me, that I may be a holy and courageous priest.”