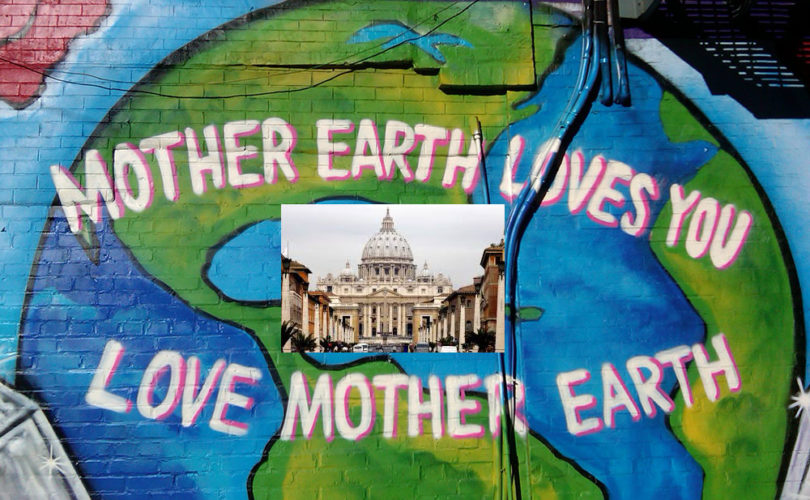 #Mercy2Earth Weekend combines the annual environmental activist Earth Day event with the Catholic devotion based on the Divine Mercy of Jesus. Divine Mercy Sunday is associated with apparitions attributed to the Polish nun St. Faustina Kowalska and is observed the Sunday after Easter. Both happen to fall on the same weekend this year.

“#Mercy2Earth Weekend is the combination of these two celebrations, to encourage Catholics to reflect on Pope Francis’ ‘Mercy to Earth’ message and put it into action,” the event website states. “Join us in bringing Mercy to Earth.”

The Mercy2Earth event is an initiative of the Global Catholic Climate Movement, a network of Catholic organizations advocating action on the contested climate change issue.

The group cited the pope’s September 2016 message for World Day of Prayer for the Care of Creation as the premise for its weekend ecological event.

“Those two themes, Earth and Mercy, are the essence of Pope Francis’ most important ecology statement of 2016 titled “Show Mercy to our Common Home” (September 1, 2016),” the #Mercy2Earth site says. “In the context of the Year of Mercy that the Catholic Church celebrated in 2016, Pope Francis released this important message and enshrined ‘care for our common home’ as an official act of mercy for Catholic to perform.”

In the message from last year, Pope Francis said he was “gratified” by the adoption of the United Nations' Sustainable Development Goals (SDG). The SGDs were developed to drive the direction of international aid and action until 2030 and they are controversial for their inclusion of abortion and population control language.

The 2016 message was released during the Jubilee Year of Mercy and followed Pope Francis’ 2015 ecological encyclical Laudato Si.

In the World Day of Prayer for the Care of Creation message, the pope also called on Catholics to go to Confession for sins of not showing respect for creation.

The examination of conscience examples the pontiff gave for such a Confession included “avoiding the use of plastic and paper,” “separating refuse” and “turning off unnecessary lights.” The pope called for Catholics to have an “ecological conversion” as well.

The #Mercy2Earth event invites participants to register their act of mercy to the earth or their #Mercy2Earth-related event.

Event ideas include incorporating #Mercy2Earth into your Sunday liturgy or hosting a prayer service and starting a “green” or care for creation team in your parish community.

“Acts of Mercy Ideas” include encouraging your parish to implement “green” programs and organize a Divine Mercy Chaplet that incorporates care for creation in your family, parish or community.

Another one of the “30 different ways you can show mercy to our common home” is to “only fill the kettle and boil the amount of water needed.”

This is the third time since Pope Saint John Paul II pronounced the first Sunday after Easter as Divine Mercy Sunday in April 2000 that the day has landed on the same weekend with Earth Day, according to a report from the National Catholic Reporter.

The Divine Mercy devotion stems from St. Faustina’s diary, where she recorded revelations from Jesus, the Blessed Mother, and numerous saints that mainly concerned humanity's need for the Lord’s mercy.

The #Mercy2Earth environmental event also coincides with the release this week of a National Geographic DVD about “global warming” narrated by movie actor Leonardo DiCaprio.

At the end of the film, DiCaprio, the United Nations’ Messenger of Peace, is shown being received at the Vatican by Pope Francis at a January 2016 meeting. According to the film, the pope and the Hollywood star spoke about the necessity of the “world community” accepting the “science” of so-called climate change.

The executive director of the Global Catholic Climate Movement told the National Catholic Reporter regarding the #Mercy2Earth event: “What we're trying to do here is translate the pope's message into action.”

The fact that Earth Day and Divine Mercy Sunday ended up on the same weekend in their first observances since the pope's message came as a “wonderful surprise,” Tomás Insua said. “It was a beautiful coincidence.”