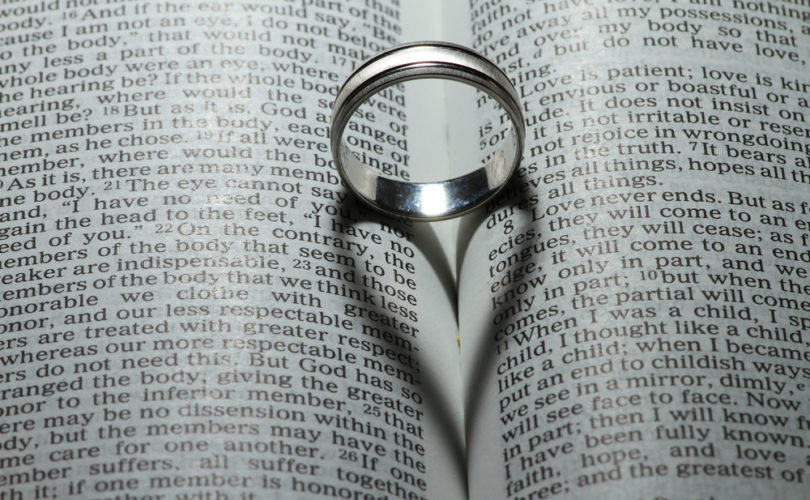 NASHVILLE, TN, July 13, 2015 (LifeSiteNews) – After the denomination approved homosexual “marriage” and even approved a homosexual wedding rite, one Episcopal bishop still says “no.”

The Right Reverend John C. Bauerschmidt, bishop of the Episcopal Diocese of Tennessee, has written a pastoral letter explaining that there will be no gay “marriage” under his watch.

“The General Convention of the Episcopal Church authorized provisional rites for the blessing of same sex relationships, which might be used for the blessing of these relationships in churches under the direction and with the permission of the local bishop,” Rev. Bauerschmidt wrote. “I have not given direction or permission for the use of these rites. This policy remains unchanged.”

In his statement, the Tennessee bishop also said that while the concept of civil marriage has interplay between church and state, marriage is an institution “that predates any civil code.” “No justice or legislature determines a use of faith communities in courtesy to marriage,” Bauerschmidt concluded.

Earlier in July, Episcopal bishops endorsed new wedding services for homosexuals to get “married” in church. The bishops changed their denomination's canons governing marriage, substituting the terms “man” and “woman” with “couple.” Also, the bishops censored the line “Holy Matrimony is a physical and spiritual union of a man and a woman” from the canon. The changes are to take effect November 1.

Bishop Bauerschmidt has said he considers relationships between men and women one of the “most basic foundations of human culture.” He spoke against the changes at the convention, explaining that “procreation” is a central part of the Christian understanding of marriage. Christian matrimony “must have the potential to be fruitful in the procreation of a third person,” he argued.

Bishop Bauerschmidt has exercised that right to refuse. If indeed the denomination's new policy is adhered to, he should experience no negative repercussions.

Nevertheless, the Tennessean has come under fire from gay activists both outside and within the denomination. Some bishops insist on no right for clergy to opt out of performing gay “marriages” and no right for bishops to disallow them in their dioceses.

The leader of Anglicans worldwide, including the U.S. Episcopal Church, Archbishop of Canterbury Justin Welby, released a statement expressing his “deep concern” over the bishops' decision and urged the bishops to change their minds. Welby wrote that the “decision will cause distress for some and have ramifications for the Anglican Communion as a whole, as well as for its ecumenical and interfaith relationships.”

Bishop Edward S. Little II of northern Indiana argued at the denomination's convention that the changes “alter the received faith of the church.” Bishop William Love of Albany told his brother bishops, “God incarnate … [was] quite aware of the nature of marriage and could have offered alternatives but did not.” Love continued, “God has told us that is not appropriate to use the gift of sexual intimacy” outside the marriage of one man and one woman.

The majority of Episcopalian bishops decided that same-gender sexual intimacy is morally acceptable and should be blessed in faithful covenanted relationships. The former bishop of New Hampshire, V. Gene Robinson — the first openly gay Episcopal bishop – said that “gays and lesbians are living out their lives in holy ways.” Robinson commented that the bishops' decision to change the denomination's canons on marriage “declare[s] how far we have come.”

A spokesman for Anglicans, Bishop Rev. Pierre Whalon, assured those concerned that “the change of canons does not change anything.”

The numbers of Christian faithful are severely dropping in America, with as many as 7.8 million fewer followers over the past seven years. The largest decline has been within mainline Protestantism, a group of denominations increasingly embracing homosexuality as a moral lifestyle and homosexual “marriage” as blessed by God.

The Episcopal Diocese of Tennessee oversees 45 churches, missions, parishes, and chaplaincy churches, with 16,000 members throughout the state.