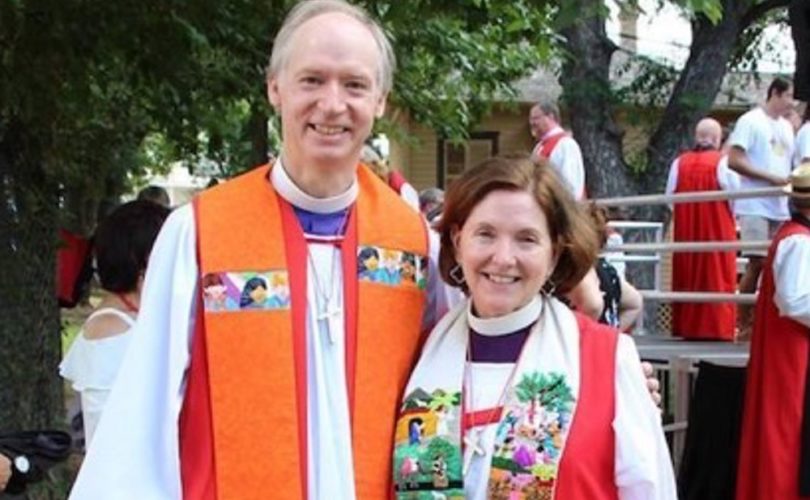 Two bishops at the 79th General Convention of the Episcopal ChurchFacebook

AUSTIN, Texas, July 17, 2018, (LifeSiteNews) – Episcopal dioceses in the United States which reject the notion of same-sex “marriage” must now allow gay and lesbian couples to “marry” in the church.

The Episcopal Church’s General Convention meeting in Austin, Texas last week found a way to expand gay “marriage” rights into all dioceses while seemingly respecting the consciences of local bishops who object on theological grounds.

Praised as a compromise that doesn’t alienate traditionalists, the resolution essentially allows an end-run maneuver around the consciences of the leaders of eight U.S. dioceses who are standing firm against same-sex “marriage.”

Beginning in December, when a gay couple wants to “marry” in a diocese where the same-sex “marriage” is not condoned, the priest who has agreed to conduct the ceremony will be free to bypass his or her bishop and reach out to an Episcopal bishop elsewhere who can step in and provide “pastoral support” for the mono-gendered couple.

Not all bishops were enthusiastic about the resolution. Some expressed grave concern that the move undermines their authority and could lead to a schism within the Episcopal Church.

Bishop John Howard of Florida said his diocese was still reeling from the 2003 consecration of openly gay Bishop Gene Robinson, which led some clergy and lay members to break from the denomination, according to a report by RNS.

The dissenting bishops were part of a small minority, however.

Most voting delegates spoke in glowing terms about the move toward broader acceptance of gay “marriage” within the Episcopal Church. Some employed the imagery and language of the civil rights movement to add a note of gravitas to the moment.

One priest said, “For 40 years our LGBT brothers and sisters have been at the back of the bus and, every so often, they are invited to move forward one row at a time.”

Another delegate who is a longtime pro-LGBT leader said she supported the resolution “recognizing that this is a hard-won compromise but one which I believe will lead us forward into that work as the Episcopal branch of the Jesus Movement.”

The chairman of the General Convention’s Task Force on the Study of Marriage, “implored deputies to complete convention’s actions on marriage. ‘We are fond of saying around the Episcopal Church that all are welcome, and all means all, y’all,’” according to an Episcopal News Service report.

“I think this is a really important moment for the church,” Long Island Bishop Larry Provenzano said in an interview with Episcopal News Service. “We do this without there having to be one side wins and one side loses. Very much like the theme of the whole convention, there’s a great movement for the church to really be the church in this time.”

A key section of the resolution states:

[In] dioceses where the bishop exercising ecclesiastical authority (or, where applicable, ecclesiastical supervision) holds a theological position that does not embrace marriage for same-sex couples, and there is a desire to use such rites by same-sex couples in a congregation or worshipping community, the bishop exercising ecclesiastical authority (or ecclesiastical supervision) shall invite, as necessary, another bishop of this Church to provide pastoral support to the couple, the Member of the Clergy involved and the congregation or worshipping community in order to fulfill the intention of this resolution that all couples have convenient and reasonable local congregational access to these rites…