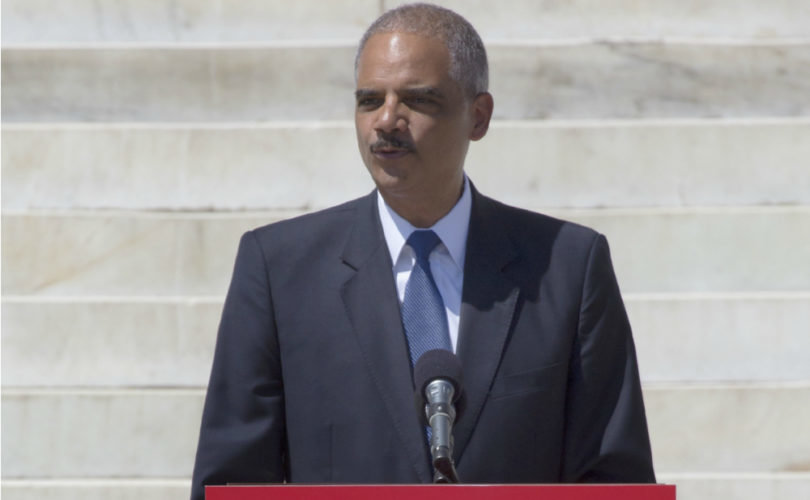 U.S. Attorney Eric Holder Jr. speaks at the 50th Anniversary of the march on Washington and Martin Luther King's Speech on August 24, 2013 at the Lincoln Memorial in Washington, D.C.American Spirit / Shutterstock.com

During a campaign event Sunday in Georgia for Democrat gubernatorial candidate Stacey Abrams, CNN reports that Holder invoked former First Lady Michelle Obama’s 2016 claim that “when they [Republicans] go low, we [Democrats] go high” instead of “stoop[ing] to their level” when someone “is cruel or acts like a bully.” Conservatives have long disputed her characterization of the two parties, but Holder is the most prominent Democrat to openly reject it.

The audience responded with laughter and applause.

“That's what this new Democratic Party is about. We are proud as hell to be Democrats,” he continued. “When I say we kick them, I don't mean we do anything inappropriate, we don't do anything illegal, but we have to be tough and we have to fight.”

Cory Booker pleads for activists to “get up in the face of some congresspeople.”

Hillary Clinton says “you cannot be civil with” Republicans.

Holder’s advice follows Hawaii Democrat Sen. Mazie Hirono’s refusal to say left-wing protesters shouldn’t follow Republicans to their homes or restaurants, and failed Democrat presidential candidate Hillary Clinton’s declaration that Democrats shouldn’t be “civil” with Republicans until her party retakes Congress,” both of which happened within the past week.

Before that, California Democrat Rep. Maxine Waters threatened in June that Trump administration officials “won’t be able to go to a restaurant, they won’t be able to stop at a gas station,” and New Jersey Democrat Sen. Cory Booker told a crowd in July to “go to the Hill” and “please, get up in the face of some congresspeople.”

Left-wing protests against Kavanaugh have seen irate screaming, near-constant attempts to shout down committee hearings, and even attempts to break into the Supreme Court building while the new Justice took his oath of office. Protesters have also chased down multiple GOP lawmakers passing through Reagan National Airport, as well as harassed and assaulted Republicans in the halls of Senate office buildings.

Despite Holder’s later qualifier that he means “kicking” figuratively, many conservatives have denounced Democrats for promoting, whether deliberately or unwittingly, a message they say left-wing extremists will take literally:

They know and don't care. https://t.co/PKm1AfDj8w

Democrats won't be satisfied until people are getting killed. Their rhetoric, especially these past few weeks, has been calculated to encourage violence and anarchy.

2/2 Eric “Pretty Boy” Holder has become another of these mob leaders. This is why they want us disarmed, that ain’t happening. Sadly these gang leaders are fomenting violence to obtain power & will result in someone's harm, especially if the #Mobocrats don’t win midterm elections https://t.co/dqit2Fxq4K

Democrats are flirting with violence and need to stop. https://t.co/wy7Ci3cYLn

Holder has previously said he’s considering a presidential run of his own against Trump in 2020.