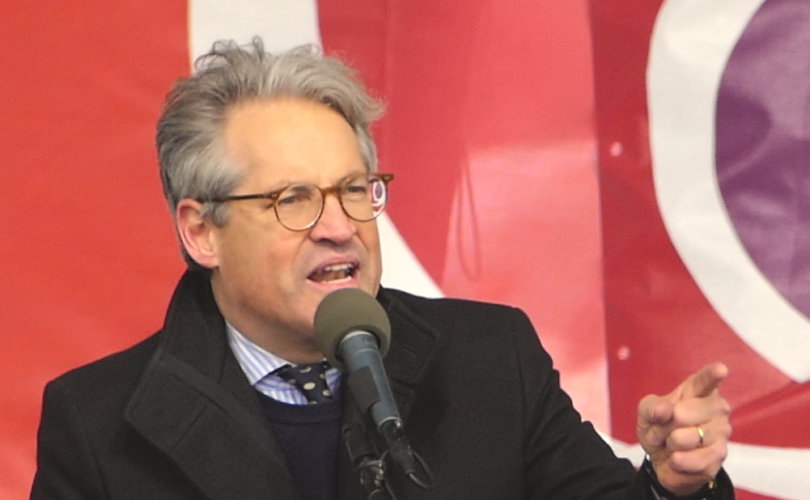 WASHINGTON, D.C., January 27, 2017 (LifeSiteNews) — Eric Metaxas blasted the mainstream media at today’s March for Life for its bias against the pro-life movement, punctuating his brief address with the question: “ABC News, are you covering this?”

“Jesus is Lord. ABC News are you covering that? ABC News, are you covering this? You want to see the women of America? Here they are,” declared the New York Times bestselling author, radio host and well-known Christian commentator, in a speech replete with wide-ranging references to history and current events.

“The media in America has not told the other side of the story, that women have been the victims of abortion and that abortion hurts women,” Metaxas told the hundreds of thousands of people gathered at the Washington Mall for the 44th annual March for Life.

“Will ABC News cover the fact that many women are bullied into making this choice by men in their lives? It is not their choice. If they had a real choice, they would never make this choice,” he added.

In this Metaxas followed the lead of President Trump, who twice in as many days castigated the media for ignoring the March for Life while playing up last Saturday’s pro-abortion Women’s March on Washington, in the first instance calling out ABC News reporter David Muir.

“This is the inclusive march, where as long as you’re alive, and a human being, you are welcome at this march,” said Metaxas, in a reference to the Women’s March, which banned pro-life groups from participating.

The March for Life is the largest annual civil rights demonstration in America, and marks the 1973 Roe v. Wade Supreme Court decision that legalized abortion in the US.

“I think we’ve all heard of fake news, right? Well, here’s an announcement, you can tweet this out: Roe v Wade is fake law,” Metaxas told the crowd.

He referenced Ronald Reagan’s famous command to USSR dictator Mikhail Gorbachev, when the American president stood by the Berlin Wall in 1987: “Mr. Gorbachev, tear down this wall!”

“And in the words of Reagan, to paraphrase the great pro-life president, let me say to the Chief Justice of the Supreme Court: Justice Roberts, tear down this law!” stated Metaxas.

“Here’s something else for Twitter: Roe v Wade is anti-science,” he said. “If the DNA of the baby in the womb is different than the DNA of the  mother how can it be the mother’s body we’re talking about?”

Metaxas, who has written a biography of Dietrich Bonhoeffer, referenced the Lutheran pastor executed by the Nazis, when he spoke of post-abortive women.

“Dietrich Bonhoeffer said abortion is murder. He also said, we have to have compassion on those who have been driven to make this tragic choice.”

“We are all sinners, we all need the forgiveness of the God of the Bible,” said Metaxas.

“And we pray that this message of love and forgiveness would get out to the women of America, that the God of the Bible, and everyone who follows Him, love those women who have made this tragic choice, and want to extend the love of Jesus to those women.”

Added Metaxas: “ABC News, are you covering this?”

He also urged compassion on abortion advocates, pointing to Madonna, who in the wake of Trump’s victory, notoriously stated she was “thinking a lot about blowing up the White House.”

Metaxas said that while he was outraged at abortion, “I have not thought a lot about blowing up Madonna’s house.”

“And the reason I have not thought a lot about blowing up Madonna’s house is because the Lord I follow commands me to love my enemies,” he said. “When Jesus told us to pray for our enemies, we’re crazy, we do it.”

Metaxas ended by leading the crowd in a prayer for the pop-star: “Madonna, Jesus loves you and we’re going to pray that his love be revealed to you and everybody that was at the Women’s March.”