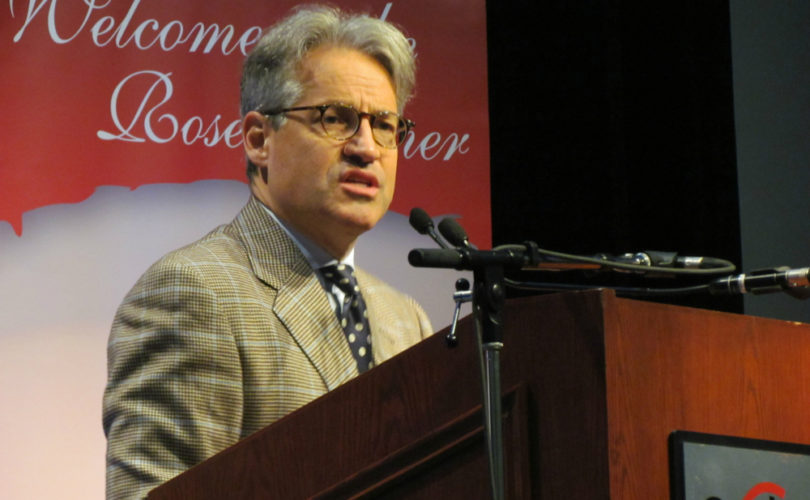 Author and speaker Eric Metaxas gives the keynote speech at the National March for Life Rose Dinner in Ottawa on May 14, 2015.Patrick Craine / LifeSiteNews

OTTAWA, May 20, 2015 (LifeSiteNews.com) – Bestselling author, speaker, TV and radio host, and former VeggieTales script writer Eric Metaxas exhorted the pro-lifers gathered for the National March for Life 2015 Rose Dinner that the time to act to bring down the abortion edifice is “now.”

“Sometimes God says, 'Stand now, act now, be all in now'. If all of you push now with all the strength you have, it will go down,” Metaxas said.

“Now is the time. Stand now, speak now, if you have a penny now, spend it for God's purposes now, or that penny will be taken away from you,” the keynote speaker cautioned.

Metaxas is best known for his biographies about William Wilberforce who fought against the British law allowing slavery, and Dietrich Bonhoeffer, a German Lutheran pastor and theologian, who was executed just weeks before the end of World War II for his stand against Nazism.

Using the collapse of Communism as exemplified by the fall of the Berlin Wall as analogous to the sought-for end to abortion, Metaxas pointed to the courage of individuals who decided that the time to act was “now.”

Metaxas mentioned Margaret Thatcher, Lech Wałęsa and St. John Paul II as examples of individuals who were not afraid to act decisively when they saw the need and the opportunity.

“They were not afraid. When he became pope, you remember that John Paul II said 'Be not afraid'. Why did he need to say that? Because it is our nature to be afraid. But God speaks to us through His servants … and the boldness of his voice encouraged others to be bold.”

“So when that troika of Thatcher, Reagan and JP II spoke prophetically and powerfully, suddenly the Iron Curtain was revealed to be what it was, a tottering rotten wall. One good shove and it went down – who would have predicted that?”

Just as happened with the Iron Curtain, Metaxas said that with the fight against abortion, “sometimes God says, 'Stand now, act now'.”

Earlier in the day on the steps of Parliament Hill, Metaxas quoted Dietrich Bonhoeffer, who said, “Silence in the face of evil is itself evil,” to encourage the 25,000 pro-lifers gathered there to be a voice for the pre-born.

At the Rose Dinner, Metaxas again referred to Bonhoeffer, who appealed to his countrymen to wake up to the evil around them, telling them, “God is calling you to stand. What are you waiting for, what are you afraid of? If you don't stand now, it will be too late.”

Metaxas observed that what happened in Germany needn't have taken place “if a few people had stood up bravely and linked arms. If a few people had been willing to lose whatever they had, for God, it would have emboldened all kinds of people, but just enough of them hung back and eventually it was too late.”

Metaxas concluded that the evil of abortion, like the Berlin Wall, will fall, “if we all push at once, now, together.”