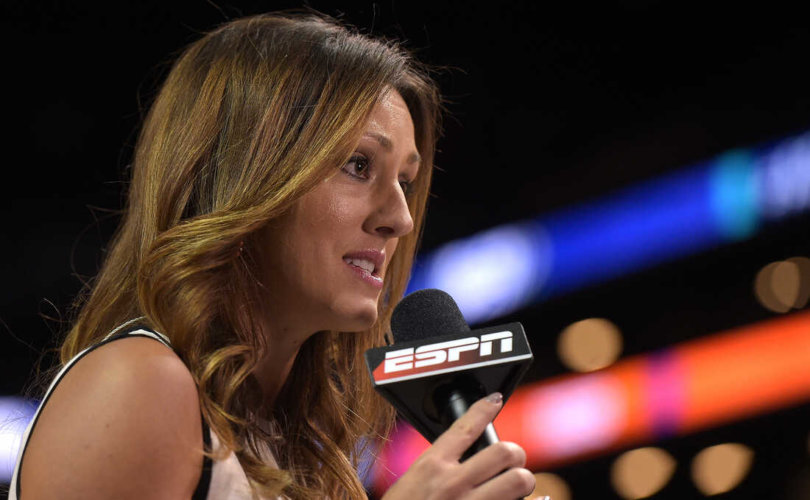 (LifeSiteNews) – Veteran ESPN college sports reporter Allison Williams has quit her job over the network’s requirement for staff to receive an experimental COVID-19 jab, citing fertility concerns as she wishes to grow her family.

Williams confirmed her decision on Sunday to step down from her beloved job as a football sideline reporter, announcing to her followers in a five-minute Instagram video that “effective next week, I will be separated from the company.”

The 15-year veteran broadcaster first announced her objection to the companywide mandate on September 9 in a post to her Twitter page, in which she explained her decision to forgo the jab was due to her wish to conceive another child with her husband, saying “the most important role I have is as a mother.”

“This was a deeply difficult decision to make and it’s not something I take lightly,” she added.

This will be the first fall in the last 15 years I won’t be on the sidelines for College Football.
My heart hurts posting this but I’m at peace with my decision. pic.twitter.com/np5V3gdrfW

Rather than comply with the mandate, implemented by parent company Disney and affecting around 4,000 ESPN staffers, Williams said at the time she had “decided I must put my family and personal health first,” taking a leave of absence originally intended to last only a season, according to a Breitbart report.

Now, however, she said that she will not be returning to the sports network after she was turned down by her former employer for an exception to taking the shot.

“I have been denied my request for accommodation by ESPN and the Walt Disney Company,” Williams, who joined the network in 2011, said in an Instagram video, fighting back tears as she explained the situation.

She shared that in response to her original message announcing the move to leave ESPN owing to fertility concerns, many women reached out to her with their own stories about fertility issues arising after taking the shot.

“To the women who have reached out and shared their experiences of getting the injection and subsequent miscarriages, menstrual irregularities, periods after menopause, I am so sorry that that is your experience,” she said.

Dr. Michael Yeadon, a former vice president at Pfizer, has corroborated the experience of these women, saying at an August conference that the mRNA COVID jabs pose a “severe risk” of infertility for women.

Yeadon cited scientific research papers that warn of the reproductive hazards wrought by the chemical ingredients, specifically lipid nanoparticles, found in the COVID shots. “Do not take these vaccines,” he warned. “There’s a severe risk to your ability to conceive and carry a baby to term.”

The jab has also been correlated with many thousands of reports of menstrual irregularities.

Official guidance on taking the vaccine while pregnant or planning a pregnancy has been inconsistent. The UK’s Medicines and Healthcare products Regulatory Agency (MHRA) originally advised that the impacts on fertility and unborn babies was unknown, prompting a cautious approach to the extent that they said for “women of childbearing age, pregnancy should be excluded before vaccination” and “women of childbearing age should be advised to avoid pregnancy for at least two months after their second dose.”

Now, however, the British Joint Committee on Vaccination and Immunisation (JCVI) has advised that “pregnant women should be offered COVID-19 vaccines at the same time as people of the same age or risk group.” This is despite the UK Yellow Card reporting system now showing 31,090 adverse events involving “a variety of menstrual disorders … including heavier than usual periods, delayed periods and unexpected vaginal bleeding” after a COVID shot.

Williams noted that “in addition to the medical apprehensions regarding my desire to have another child in regards to receiving this injection,” she is also “so morally and ethically not aligned with this [injection].”

“I’ve had to really dig deep and analyze my values and my morals, and, ultimately, I need to put them first,” she firmly declared.

“The irony in all this is that a lot of those same values and principles I hold so dear are what made me a really good employee, what helped with the success that I’m able to have in my career.”

“It wasn’t that long ago that those values were aligned with the Walt Disney Company,” she said, explaining that the company sent an email to all staff outlining its position that while the COVID jab represents “the best way forward,” that “to get it was a personal decision.”

“Their values have clearly changed. I respect that … I had hoped that they would respect that mine have not,” Williams stated.

Holding firm to her conviction, Williams affirmed that “ultimately, I cannot put a paycheck over principle. I will not sacrifice something that I believe and hold so strongly to maintain a career.”

She commented on the popular notion that there is a moral obligation to receive the jabs as part of “being a good citizen,” sharing that she had “weighed that and thought about the implications.”

Though recognizing that “we all want to be good neighbors,” she clarified that “an injection that does not stop transmission and spread for me did not weigh in morally.”

After admitting that she cannot know the future, Williams said she would hold on to her faith. “I’m going to focus on what I have to be thankful for … I’m going to pray things get better, and that I can see you on the television set in some capacity, in some stadium, covering some game soon,” she said.

LifeSiteNews reached out to ESPN for comment but received no reply in time for publication.