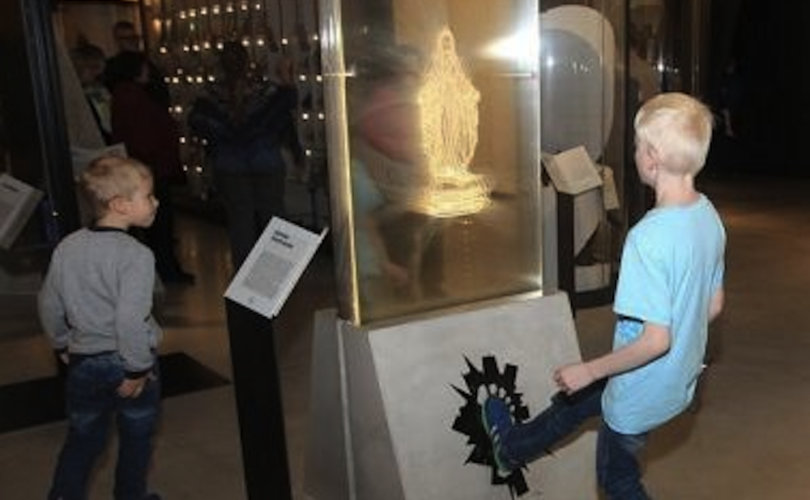 ESTONIA, October 18, 2016 (LifeSiteNews) – Estonia’s new National Museum will no longer give visitors a chance to kick to pieces an image of the Blessed Virgin Mary that represents the iconoclasm that took place during the Reformation after Conservative politicians and, ironically, the head of the country’s biggest Protestant denomination voiced their concerns.

The modernist museum, which just opened in the university town of Tartu, marked the 500th anniversary of the Protestant Reformation by presenting a holographic image of the Blessed Virgin Mary inside a display case, whose base contained a plate that viewers were invited to kick. When they did, the image shattered.

But according to Varro Vooglaid, the head of the Estonia Foundation for Family and Tradition, the museum “has taken a big step in the right direction which we welcome.” The image still shatters at scheduled intervals, but visitors can no longer activate the display with a kick.

“Of course we want the exhibit removed entirely,” Vooglaid told LifeSiteNews. “But we welcome this change. It is an outrage, really very brutal and banal to allow people to kick an image of Our Lady.”

According to Vooglaid, a public relations officer for the museum, Kaarel Tarand, publicly acknowledged that the exhibit was intended as mockery. “He basically admitted it was a way of insulting religion. He said it shows that Estonia is a secular society, where it is allowed to mock religion. But when the national museum does it, it is insulting religion in the name of the Estonian state”

Indeed, the exhibit’s take on Christianity reminded one prominent politician of Estonia’s decades-long oppression under Communism. The Soviet Union especially in its early years turned cathedrals into museums devoted entirely to mocking religion and desecrated holy relics in a vain effort to destroy the faith of the people.

Priit Sibul, parliamentary faction chairman of the ruling Union of Pro Patria and Res Publica, said “kicking an image of the Mother of God is something they did in the Soviet cultural space but would not demonstrate in public.”

Though the interactive display was evidently designed to represent the iconoclasm during the Reformation, the head of Estonia’s biggest Protestant denomination attacked it unequivocally.

Archbishop Urmas Viilma of the Estonian Evangelical Lutheran Church said the exhibit is offensive not only to Lutherans but Catholics and Orthodox. Moreover, the entire nation Estonia was dedicated to the Virgin Mary 300 years before the Reformation, he said, so “for Estonians, Virgin Mary has a special meaning; no wonder the country is popularly called the Land of Mary.”

Mart Helme, the leader of the opposition Conservative Party, pointed out the exhibit could worsen relations with Russia by offending the large minority in the country of ethnic Russians, who are more religious than ethnic Estonians.

“Most Russians living in Estonia,” Helme said, “are actively religious people and their integration is not helped by the religious insult approved on a state level. … An attack on symbols may lead to an escalation of social tensions and a cooling of the interstate relations.”