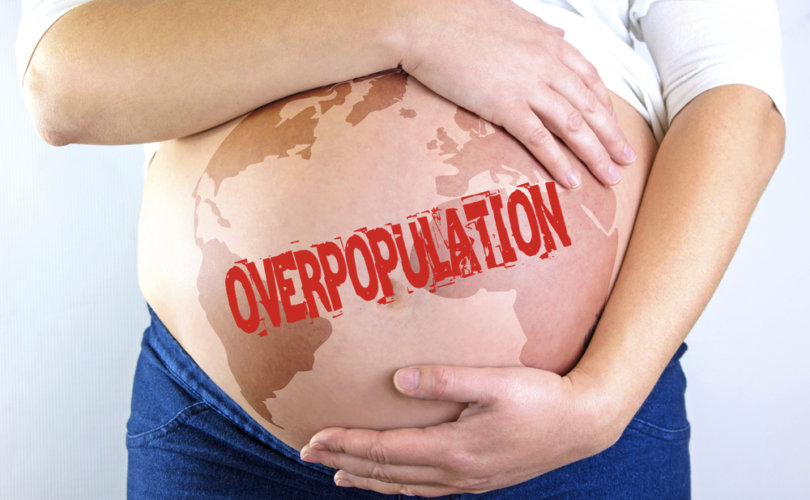 September 27, 2016 (LifeSiteNews) — People must stop having so many children if they want to avert “catastrophic climate change,” warns an American university ethicist.

Travis Rieder of Johns Hopkins University argues that the world’s population needs to shrink to save the climate. His new book is titled, Toward a Small Family Ethic: How Overpopulation and Climate Change Are Affecting the Morality of Procreation. Though Rieder says he doesn’t want forced abortions or forced sterilizations, critics say his thinking leads to either racist or totalitarian actions — or both.

“The argument here — let's spell it out — is really that our future would be much better with fewer babies from Africa and fewer babies of color in America,” political economist and demographer Nicholas Eberstadt of the American Enterprise Institute told LifeSiteNews. “These, after all, are the fastest growing groups in our global population and our U.S. population, respectively. This is the old ‘lives not worth being allowed’ mantra. It has an ugly pedigree.”

Indeed, Robert Zubrin, an inventor and space scientist, has chronicled the story of overpopulation hysteria from Thomas Malthus in the 18th century to Paul Ehrlich in the 20th century in his book, Merchants of Despair: Radical Environmentalists, Criminal Pseudo Scientists and the Fatal Cult of Anti-Humanism. He notes its sinister bedfellows included Nazism and the Eugenics movement.

Rieder doesn’t call for starving the Indians to death as Malthus did, or cutting off foreign aid and development loans as did Ehrlich in his 1968 bestseller, Population Bomb.  But he does seem to recommend penalties for people who persist in having big families — people like Catholics.

“There are 19 million adoptable orphans and there’s catastrophic climate change on the horizon. Contributing a child to the world both makes climate change worse and, if we don't get our act together, it might actually not be all that great for the child either,” he told a Bloomberg interviewer earlier this month.

Rieder starts from unquestioning acceptance of the darkest predictions about climate catastrophe and observes that the world does not appear willing to change its industrialized, highly-productive culture. The only other way to avert disaster, he says, is to have fewer children. Rieder says it should be enough to educate people about family planning, indeed simply to educate them at all, to lower birth rates.

As for reactionary religious groups such as Catholics, Mormons, and “Ultra Orthodox” Jews who continue to have too many children, Rieder warns, “Well … when you make that choice, there's a cost. You have to pay for it in some way.”

Eberstadt told LifeSiteNews that Rieder is resurrecting a “zombie ideology” that  reappears in each generation — as eugenics a century ago and as Ehrlich’s population control in the 1960s. “Each new generation they are discredited, yet somehow they keep on coming back from the dead.”

“When I was a kid,” Eberstadt continues, “the justification for pressuring other people to have fewer babies than they wanted was the supposed inevitability of global famine absent draconian birth control. Since that time, global population has doubled and the threat of famine has simultaneously retreated, mainly to the redoubts of killer governments like North Korea.”

Climate change, Eberstadt told LifeSiteNews, is the new famine — “the card that one invokes when it is time to shut down the discussion about human rights and move on to the serious business of getting rid of the ‘unfit,’ as Margaret Sanger (Planned Parenthood founder) used to call them. Although there has been considerable human progress over the past century, one would not know it from the enduring appeal of eugenics and population control in certain quarters.”

Reggie Littlejohn, president of Women’s Rights Without Frontiers, told LifeSiteNews that the Chinese government boasted in 2009 that its “One Child Policy was successful in reducing carbon emissions blamed for global warming” to the tune “of 1.83 billion tons of carbon dioxide.” The Chinese claim 400 million lives were prevented.

“What the Chinese government has not mentioned,” Littlejohn said, “is the fact that too many of these lives were prevented through forced abortion and involuntary sterilization. Human beings are not walking carbon footprints.”

Zubrin argues that global warming and increases in carbon in the atmosphere might be good things. When global warming happened 1,000 years ago, he writes, “These warm temperatures were no disaster. On the contrary, they are believed by historians to have contributed materially to the growth of population and prosperity in Europe  during the High Middle Ages. … Oats and barley were grown in Iceland, wheat in Norway, hay in Greenland … and Canadian forests flourished tens of kilometres further north.”

As for carbon dioxide, it provides plants their main source of nutrients. “Human industrial CO2 emissions may be having a modest effect on climate, but they are having a positive effect on plant growth worldwide; one study has shown a 14 percent increase.” Other studies predict an increase of 24 percent for both wild and cultivated plant life if CO2 reaches levels foreseen for the end of the 21st century. He concludes: “We are making the Earth a more fertile world.”

But opponents of global warming don’t want a better world, Zubrin argues, because their “fundamental thesis” is that human beings are “pathogens” who are harming the Earth’s current balance. Technological solutions such as expanded cultivation, or greater use of natural resources, are not solutions because they change fragile Mother Nature. The essential idea is anti-human. “The time is long past due,” he writes, “to put a stake in the heart of this monster.”