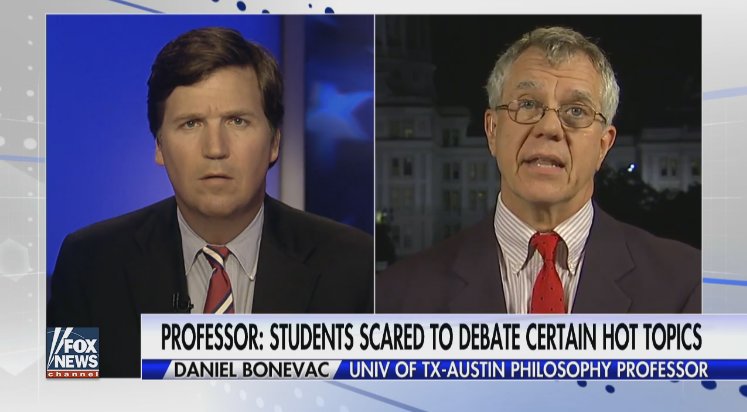 December 7, 2016 (LifeSiteNews) – A University of Texas-Austin philosophy professor laid out the depressing truth about the state of discourse in society, particularly on college campuses, to FOX News's Tucker Carlson this week.

“Students come in with a certain set of expectations, and those have been changing just over the past few years,” Bonevac explained. “Before, they were eager to debate ideas. They wanted to hear arguments even on the other side to learn. But recently I’ve found that a strange phenomenon occurs: as soon as a controversial topic comes up, one where there’s an approved, politically correct opinion, I find that students just turn off. They think either you’re going to tell me what I’ve already heard many, many times before, ‘I have nothing to learn from this,’ or you’re going to say something politically incorrect, and that’s very dangerous. ‘I feel uncomfortable because of that. I could be asked to take a stand and I don’t wanna be on the spot.’”

Carlson pointed out that a “small group of malcontents” appears to have all the power in society and on college campuses.

Bonevac said that on November 9, students who were not enrolled in his class showed up prepared to disrupt it should he say something upsetting to them.

“When I just proceeded with business as usual, they left, but that small number is ready to try to shut down any open discussion of ideas,” he said. The professor also said several semesters ago, someone who wasn't a student in his class raised his hand and proceeded to go on a “diatribe” of grievances against him.

“My other students came up to me supportively, saying, ‘What was that? We never saw that person before!’” said Bonevac. “But they were trying to shut down the course.”