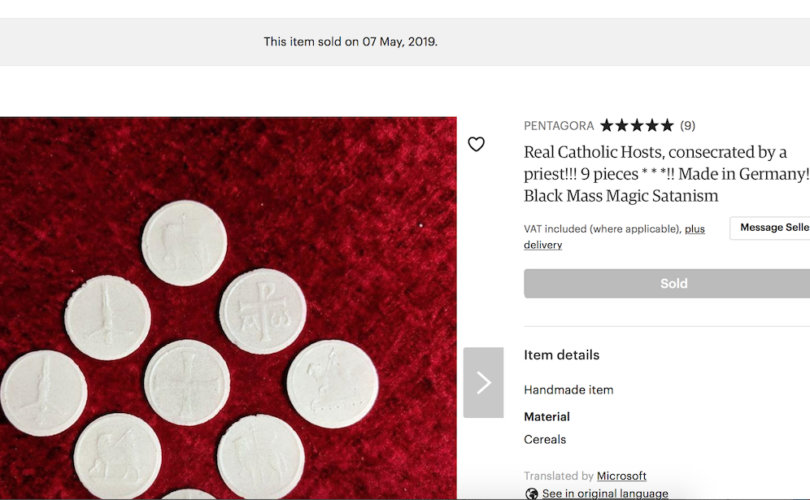 BROOKLYN, New York, May 16, 2019 (LifeSiteNews) ― A spokeswoman for Etsy has stated that the business does not approve the sale of consecrated hosts for desecration.

According to Catholic News Agency, Jess Kallberg, Etsy’s policy manager, responded to a petition published May 13 asking the online marketplace to ban the sale of consecrated hosts. She said “the reselling (sic) of consecrated hosts” is a violation of our policies.

Kallberg said also the listing was removed when Etsy was notified of it and that the company was committed to “creating a welcoming environment, including for religious users.”

On May 8, LifeSiteNews reported that a vendor had offered nine “real Catholic hosts, consecrated by a priest” for sale in the online marketplace. The seller, who called himself “AL” and his business “Pentagora,” said the hosts were “to abuse for classic black fairs or black magic purposes.”

When challenged by both LifeSiteNews and LifeSiteNews’ source, AL protested that the hosts had indeed been consecrated by a willing priest in Germany.

“There are a handful of priests in Germany who work in the satanic underground. Unfortunately, I am not allowed to tell you more,” he stated.

In response to the sacrilege, Rebecca Gorzynska began a Change.org petition in which she asked Etsy to prohibit the sale of consecrated hosts:

On May 7, Consecrated Hosts “for abuse in black mass” were sold on Etsy.

Catholics believe that Consecrated Hosts are truly the Body, Blood, Soul, and Divinity of Jesus Christ. It is the most precious thing in our religion. It is given freely, and so the only reason anyone could ever have to sell it would by definition be illicit. To sell them “for abuse” is hateful against the Catholic Church, and should be prohibited by Etsy.

We understand that Etsy can't screen each listing individually, and so to prevent this happening again, we ask that Etsy add “Consecrated Hosts” to their already strict list of prohibited items.

(The sold listing has since been deleted; however, we still ask for this addition to Etsy's official rules!)

The petition has now garnered more than 10,500 signatures.

It was clear from the start that the sale of consecrated hosts violated Etsy’s policies, for they were listed as “handmade,” a category that cannot be used by someone “not involved in designing or making that item.” Etsy also has an anti-discrimination policy that forbids “posts that support or glorify hate groups and their members” and “derogatory or demeaning remarks against protected groups,” including religious groups.

Nevertheless, Etsy’s policy manager could not guarantee the sale of the Eucharist could never happen again, for Etsy does not pre-approve every item.

“We rely on each seller to ensure the items they list adhere to our policies, and our specialized teams take action when we see items that violate these policies,” Kallberg explained.

“We strongly encourage anyone who sees an item that violates our policies to submit a flag by clicking the ‘Report this item to Etsy’ link at the bottom of the listing.”