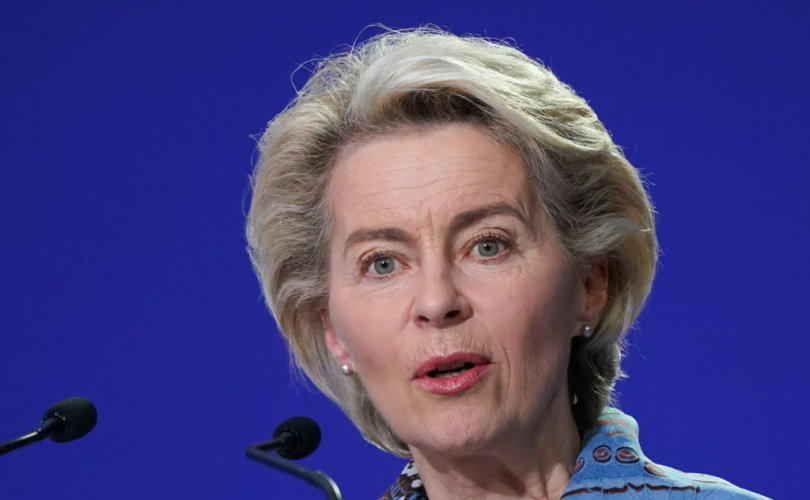 Speaking at a press conference Wednesday, Commission President Ursula von der Leyen lamented that around 33 percent of EU citizens have not yet received an abortion-tainted COVID jab and proposed a “common approach” among the 27 countries which are part of the EU.

“One-third of the European population is not vaccinated. These are 150 million people, this is a lot,” von der Leyen said, suggesting that “the vast majority” of the un-jabbed could be coerced into receiving the shot.

“I think it is understandable and appropriate to lead this discussion now [about] how we can encourage and potentially think about mandatory vaccination within the European Union.”

“This needs discussion, this needs a common approach. This is a discussion which I think must be conducted,” she told the gathered journalists, admitting that “this is pure member state competence — it is therefore not up to me to give any kind of recommendation.”

The EC president said her “personal position” was that “we have the lifesaving vaccines, but they are not being used adequately everywhere, and this costs. This is an enormous health cost.”

Von der Leyen expressed her opinion that “full vaccination and boosters provide the strongest protection against COVID that is available now” and moved to create a sense of urgency around receiving a COVID jab, stating that we are in a “race against time” regarding the omicron variant.

“Scientists tell us we have to do everything possible to make the best out of the time we have till we have certainty about the characteristics of transmissibility and severity of Omicron,” she said. “Prepare for the worst, hope for the best.”

In an accompanying press release, the European Commission president cited the newly identified omicron variant of the virus as potentially devastating the continent, categorizing the strain as “presumably highly contiguous” which therefore “calls for our utmost attention.”

Consequently, she said the EU is “stepping up” its COVID shot program, as well as “investment in treatments … improving monitoring and prevention, and reinforcing our global solidarity.”

“In the meantime,” she said, “I reiterate my urgent call to all of you: get vaccinated, get a booster, and follow the rules to protect yourselves.”

The release built upon von der Leyen’s comments to journalists, stressing a need for EU member states to “stand ready to impose all necessary controls,” including “renewed campaigns to target unvaccinated people in all eligible age groups, with targeted national strategies to address vaccine hesitancy,” as well as ensuring “vaccine sharing to achieve the global vaccination target of 70% in 2022 agreed at the G20 summit in October 2021.”

The Commission also advised that the 27 EU countries should make daily assessments on travel restrictions and to “rapidly deploy booster doses to maintain strong levels of protection against the virus including the omicron variant, starting with the most vulnerable groups.”

Von der Leyen’s demands follow on the heels of Austria and Germany announcing plans to enforce COVID shot mandates on citizens, requiring reception of the jab and imposing hefty penalties for those who do not comply.

Unhappy with presiding over the country with the lowest COVID shot uptake in western Europe, Austrian Chancellor Alexander Schallenberg announced November 19 that “we have not been able to convince enough people to get vaccinated” and subsequently ordered that the historic nation would require individuals to have taken the shot before February 1, 2022.

Austrians who defy the order twice will face fines of up to €7,200 (roughly $4,000) or a four-week prison sentence, according to a draft of the bill leaked to the press.

The push to vaccinate the majority of the world’s population in order to prevent serious disease for those who are not at risk to begin with — the U.S. Centers for Disease Control and Prevention reports an infection survival rate of greater than 99.95% for those under age 50 — adds to the skepticism surrounding the increased push for COVID booster shots.

Meanwhile the list of FDA-recognized adverse events has grown from severe anaphylactic reactions to include fatal thrombotic events, the inflammatory heart condition myocarditis, and neurologically disabling disease like Guillain Barré Syndrome, as well as tens of thousands of recorded deaths and permanent disabilities.