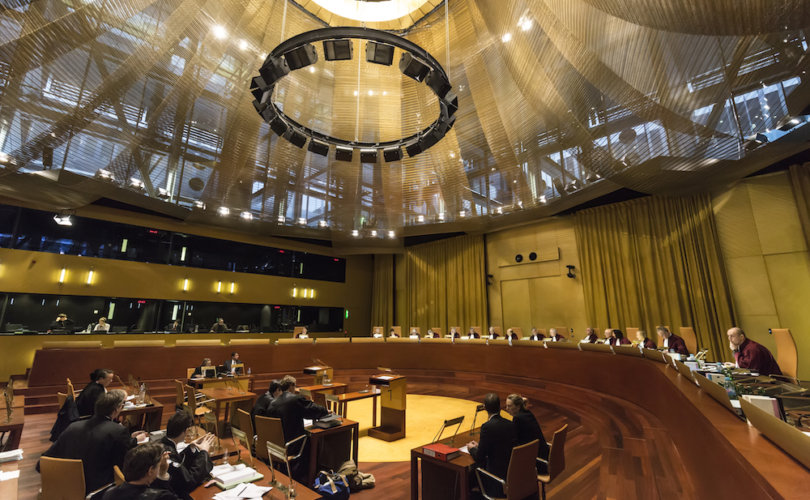 Court of Justice of the European Union

January 24, 2019 (LifeSiteNews) — The Court of Justice of the European Union ruled Tuesday that an Austrian law granting a paid public holiday on Good Friday to employees who are members of certain Christian churches constitutes “discrimination on grounds of religion.”

The decision, which involved several Europe directives, requires Austria to provide equal treatment to all workers and to amend legislation in order to adapt to EU equality standards. The judgment amounts to removing sovereign appreciation of religious rights from EU member countries.

Members of the Evangelical Churches of the Augsburg and Helvetic Confessions and the United Methodist Church – all Protestant denominations – as well as the Old Catholic Church, which broke away from the Roman Catholic Church in 1877 after the proclamation of the dogma of infallibility, are allowed paid leave by law on Good Friday. They can ask for monetary compensation instead if their employer does not allow them to take a day off that has special significance for them.

Strangely enough, the law only caters to a small minority of Austrians, the overwhelming majority of whom are Roman Catholics. It is in fact the result of pressure on the part of employers who are expected to “care” for their workers, allowing them to live out their religious faith but who did not want to support the cost of a general public holiday on Good Friday.

Most public holidays in Austria are linked to Christianity. Besides New Year's Day, May 1 and the National Day on October 26, the Epiphany on January 6, Easter Monday, Ascension Day, Whit Monday, Corpus Christi, August 15 (Assumption of the Virgin Mary), All Saints Day on November 1, the Feast of the Immaculate Conception on December 8, Christmas Day and St. Stephen’s Day on December 26 are all religious feasts, some of which are particular to Roman Catholicism. All employees benefit, regardless of their religious affiliation.

The affair was brought before the Court of Justice of the European Union in Luxembourg by the Austrian Supreme Court, whose judges requested a preliminary ruling in order correctly to assess the case of Mr. Markus Achatzi, who as an employee of Cresco, a private detective agency, considers himself a victim of discrimination because he did not get the same leave as some of his Christian colleagues. He seeks payment for his work on April 3, 2015, to the tune of 109.09 euro (about $120) plus interest.

The sum might seem ridiculously small, and the affair a plain case of envy, but its implications are very wide. The judgment at first instance dismissed Achatzi’s case, but a Court of Appeal decided he had been right to complain. Cresco took the affair to the Supreme Court, probably not because of the damages involved but because all employers in Austria could from then on be expected to offer an extra day’s leave to all their collaborators.

The Court of Justice of the European Union, which verifies compliance of national legislation of member states with European directives or “laws,” decided that reserving a public holiday, or monetary compensation thereof, only for employees or members of certain Christian churches is a “direct discrimination on grounds of religion” that cannot benefit from the directive that allows for specific measures member states may implement in order to compensate for disadvantages linked to religion.

While the answer of the CJEU to a preliminary question is not in itself a final judgment on the case, the jurisdictions of member states are expected to comply with its findings. In this case, the solution given by the European judges is that Austria should amend its legislation in order to restore equal treatment – that is, either to scrap the Good Friday holiday altogether or to let all employees enjoy paid leave or financial compensation on that day. Until Austrian law is amended, private employers subject to the current legislation must grant all of their other employees a public holiday or extra pay on Good Friday, provided they ask for it.

Part of the reasoning of the European judges is that the Christians allowed to leave under the current law are not required to perform a particular religious duty on that day; the only condition for obtaining it is to belong formally to one of the churches designated by the law.

The Polish government intervened in the case in order to argue that “the grant by a member state of a public holiday for the celebration of a religious festival is not covered by EU law, with the result that the court has no jurisdiction to answer the questions referred to it by the referring court.” According to the CJEU, however, insofar as the provisions made for members of certain churches have nothing to do with relations between a member state and churches, so that the question of “difference of treatment” takes precedence. The Polish plea alleging lack of jurisdiction was therefore rejected.

The European Court also states that in its opinion, “positive discrimination,” which is officially allowed under European law in order to compensate disadvantages, in this case “linked to religion,” is not applicable here. This means that religious traditions, historical “privileges” and other measures favoring Christianity, or at least certain Christians, can and should give way in the EU before the sacrosanct principle of equality.

The elephant in the room in this case is that members of other religions whose presence in Austria is growing. Muslims, in particular, enjoy paid leave on public holidays linked to the Catholic calendar, but for their own feast days and fasting periods, they are expected to rely on the goodwill of employers in order to obtain leave to perform their religious rites.

It can reasonably be argued that they are disadvantaged under Austrian national law because their important religious festivals are not recognized while Catholic feast days are. How long will it take before they request specific holidays as a form of positive discrimination? Under the ruling of the Court of Justice of the EU, such a move, if one reads its judgment correctly, would not be rejected.

In other European states, the question is regularly raised. In France, for instance, there have been several propositions aiming to cut back on Catholic public holidays in order to introduce Muslim holidays for all, without augmenting the number of public holidays overall.

It would then be difficult to counter such a move at the national level on the grounds that Catholicism is the historic religion of France – which as such, should be able to enjoy specific rights – because of the European principle of equal treatment regardless of “religion or belief, disability, age or sexual orientation” in the workplace.