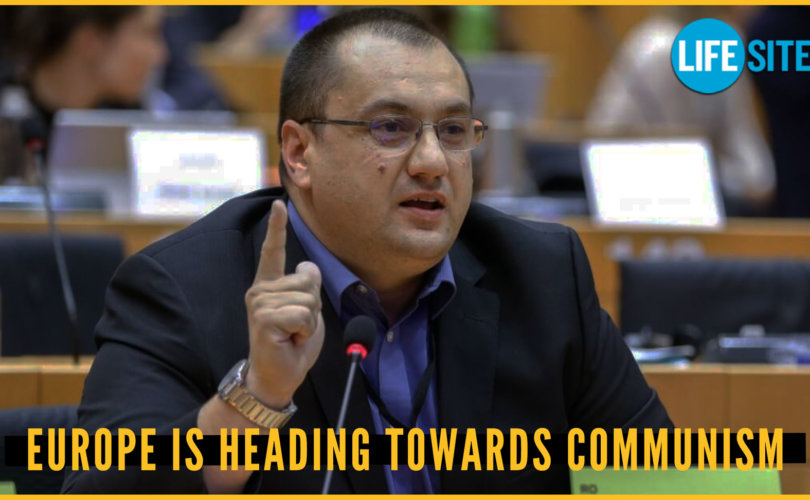 (LifeSiteNews) — A member of the European Parliament and priest of the Romanian Greek-Catholic Church is fighting what he views as a rising tide of “communism” in the European Union. Europe is “transitioning … from a democracy to a tyranny,” he told LifeSiteNews in an exclusive interview.

Before the 2019 elections to the European Parliament, Cristian Terheș had been asked to consider running for political office to advocate for the rights of Christians in Europe. After careful consideration, and in consultation with his bishop, he did so. Within a year of being elected, he found himself in the middle of a crisis in European life with the advent of lockdowns, mask mandates, and now vaccine certificates or “green passes.”

He is a part of the European Christian Political Movement (ECPM) which, according to its website, is the “only European political party that aims to reflect and work on Christian-democratic politics in Europe from an explicitly Christian-social point of view.” The ECPM is a pro-God, pro-family, and pro-life political party, and currently has five sitting Members of the European Parliament (MEP).

Terheș grew up under the influence of the Soviet Union when Romania was a communist nation, and told LifeSiteNews that “coming from a former communist country, and I know how it is going, you know, when you grant government more power in order to condition the exercise of any of your rights.”

In light of the parallels that he sees between what happened in his formerly communist nation and what is happening now, he has dedicated his political career “fight for human rights and for liberty.” In October he made waves on social media with a speech castigating the prevailing mindset in favor of vaccine passports in European politics. The speech is available on various channels and platforms and has amassed millions of views.

He told LifeSite that the vaccine certificates are going to “condition” people to have their “basic fundamental rights” taken away, despite the fact that they are sold to the public as a way to have there freedoms back. Of particular concern to the Romanian is the untested nature of the available abortion-tainted COVID jabs.

“It is unfair to force that many people do to get into their bodies a medical product that doesn’t have enough time … to be tested enough to be, you know, so we will know all the side effects,” he said. He added that it is not only his opinion that the vaccines are not well tested, but the European Commission on Justice said that “as of right now, we don’t know all the effects of the vaccines.”

Terheș said that the EU is trying to “play God” considering “that these vaccines have a high risk,” and yet people “might lose their jobs” if they do not take the jab. He warned about the advent of vaccine passports earlier this year. “Sadly, everything that I said in the month of April and May of this year proves to be right because we are at a point right now across the EU where people cannot go to the job anymore unless they have a certificate, they cannot go to a shop, you cannot go to a movie theater, they cannot travel unless they have the certificate.”

He explained that he sees his role as a politician as complimentary to his vocation as a priest, as it is important to him to fight for the heritage of the Catholic Church and Christian values in Romania, which were heavily suppressed during communist times. “I think I can do a lot of good things for, for my church and for my country. From there, I can help the people, you know, fight defending the basic fundamental rights and the Christian values.”

During the interview, he said that “respect for national sovereignty” is fundamental to his party’s platform in an attempt to “move forward with the same European project they will see envisioned by the founding fathers” of the EU. He stressed the differences between the U.S. and the nations of Europe as being primarily historical. “In Europe, you have the rich heritage, you know, different cultures, different the rights of Christianity … We have just in the East, the Catholic Church, you know, you have plenty of local churches with different traditions, different languages, different … But this is this is the beauty of Europe.”

Integral to the history and culture are the “Judeo-Christian values as part of the European Foundation,” which have been left out of the conversation by the President of the European Commission Ursula von der Leyen, who, according to Terheș, said that “the foundation of Europe is in the Greek Philosophy, in Roman law enforcement.” Terheș admitted that this is part of the history, but he believes it is dangerous to leave out the Christian reality as “Roman law allows territories of tyranny,” and “Greek philosophy allows slavery” if left unchecked.

He is particularly troubled by Austria’s government essentially placing the unvaccinated under house arrest for 10 days. Videos have circulated on social media platforms showing law enforcement officers randomly stopping citizens in shops and in their cars to see if they are vaccinated, and therefore legally allowed to leave their homes for “non-essential” reasons.

Referring to what happened in Germany and Austria under Adolf Hitler, Terheș said “history is repeating itself … we have to look at the methods, we don’t have to wait until these methods are implemented.” He said that the utilitarian mindset that surrounds the push for vaccine segregation is “absurd.” “Instead of following the examples of the great leaders of the world that defended freedom and liberty, all these weak leaders … they’re following the examples of Stalin.”

He told LifeSiteNews that there are discussions to “impose a digital ID for every European citizen so they will not be persons anymore … they will have all the details about you, whatever you eat, whatever you buy, where you go.” Currently the push for digital ID measures are only in draft form, but he said reading about them in parliamentary documents “scared the heck” out of him.