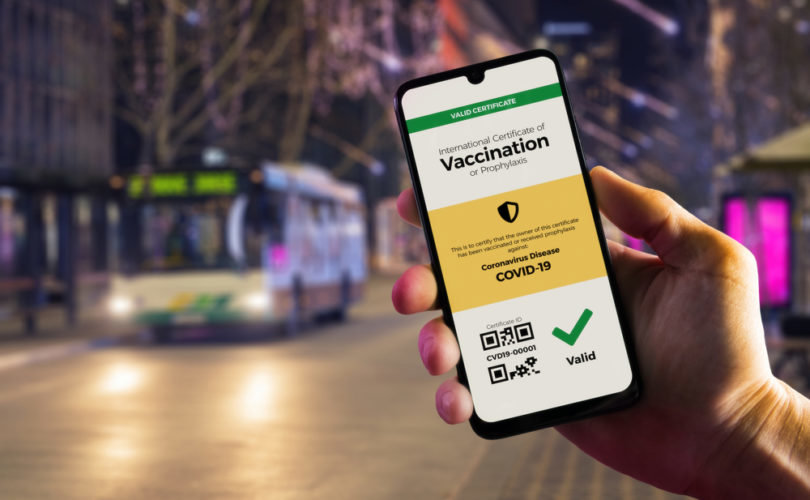 BRUSSELS, Belgium (LifeSiteNews) — The European Commission has announced it intends to extend use of the Digital COVID Certificate until June 30, 2023, at the earliest, despite previously agreeing it would cease functioning at the end of June 2022.

The vaccine passport verifies the holder’s COVID vaccination and recovery status, or whether they have tested negative as unvaccinated international travelers, and has been used to exclude those who refuse the vaccine from various public settings and thus to push citizens of the 27-country bloc towards taking the experimental shot.

A press release from the European Commission on Thursday claimed the extension until the middle of 2023 was necessary because “at this stage it is not possible to determine the impact of a possible increase in infections in the second half of 2022 or of the emergence of new variants.”

“Extending the (legislative) Regulation will ensure that travelers can continue using their EU Digital COVID Certificate when travelling in the EU where Member States maintain certain public health measures,” the statement continued.

“The Commission is adopting the proposal today to make sure the European Parliament and the Council can conclude the legislative procedure in time before the current Regulation expires.”

Attempting to incentivize participation in vaccine trials, the European Commission also said that those who receive an unapproved COVID shot as part of a trial will also be issued with a digital certificate showing their vaccinated status.

“The EU Digital COVID Certificate issued to trial participants may then be accepted by other Member States. This measure aims to encourage the continued development and study of vaccines against COVID-19,” the statement reads.

Many countries around Europe had begun dropping draconian restrictions in the past few weeks, but the latest push by the European Commission to extend control over the bloc in this regard until at least June 2023 does not bode well for those citizens hoping for a full return to normality.

One Member of the European Parliament (MEP) told LifeSiteNews last month that the vaccine certificates were going to “condition” people to have their “basic fundamental rights” taken away, despite the fact that they are sold to the public as a way to have their freedoms back.

Interviewed by Kennedy Hall of LifeSiteNews, Romania’s Cristian Terheș MEP also said the untested nature of the available abortion-tainted COVID jabs are of particular concern to him.

“It is unfair to force that many people to get into their bodies a medical product that doesn’t have enough time … to be tested enough … so we will know all the side effects,” he said.

Terhes added th at it is not only his opinion that the vaccines are not well tested, but the European Commission on Justice said that “as of right now, we don’t know all the effects of the vaccines.”

Terheș said that the EU is trying to “play God” considering “that these vaccines have a high risk,” and yet people “might lose their jobs” if they do not take the jab.

He had warned about the advent of vaccine passports earlier last year.

He also told LifeSiteNews that there are discussions to “impose a digital ID for every European citizen, so they will not be persons anymore …  They will have all the details about you, whatever you eat, whatever you buy, where you go.”

The  digital ID measures are currently in draft form only, but he said reading about them in parliamentary documents “scared the heck” out of him.