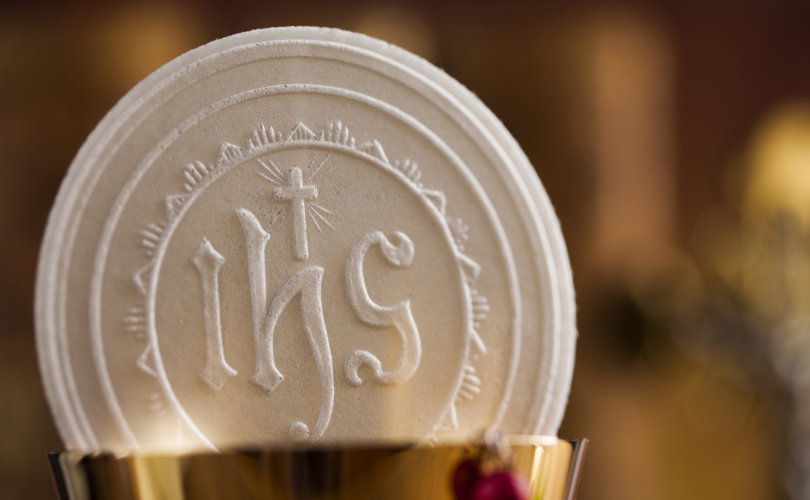 Father Corazzina joked in Italian, “Jesus is flying” as the Eucharist was blown off the table altar – which had a bicycle resting against it at the front – onto the ground.

Father Corazzina, who was wearing a skin-tight cycling outfit in addition to his rainbow stole, picked up some of the profaned Hosts. Another unidentified man in a sleeveless shirt and cycling shorts picked up others.

Immediately after the act of sacrilege took place, Corazzina began reciting the Agnus Dei (Lamb of God) in Italian as if nothing egregious had taken place.

— Article continues below Petition —
PETITION: Canonize Navy chaplain Fr. Capodanno for giving his life to save souls
Show Petition Text
7908 have signed the petition.
Let's get to 9000!
Thank you for signing this petition!
Add your signature:
Show Petition Text

Catholics believe that each consecrated Host contains the full Body, Blood, Soul, and Divinity of Jesus Christ, which becomes present after the words of consecration, but only if the liturgical rite takes place with proper form, matter, and intent.

Preceding the Eucharistic Prayers of the New Mass, it is necessary – according the rubrics – to say a Preface, which can vary by season, depending on which Eucharistic prayer is used. Corazzina did not use a Preface prayer that corresponds with the rubrics, but instead improvised.

In addition it is necessary to say a Prayer Over the Gifts that is found in the rubrics for Mass, but Corazzina sang a hymn that did not correspond to the New Mass stipulations.

It is Catholic teaching that for a sacrament to be valid, which includes the Sacrament of the Eucharist, a priest must perform the ritual with the intention at least of doing what the Church does.

One way of knowing the intention of the priest, according to a commentary on the teachings of Saint Thomas Aquinas on the subject, is if the priest performs “the rite as it is customarily performed in the true Church.”

It is not clear whether Father Corazzina performed the Mass he offered with proper intention due to his improvisation of important prayers and his seemingly laissez-faire attitude to securing the Eucharist.

The Mass was celebrated at the southernmost tip of Italy in a park in front of the sea, and Father Corazzina began the liturgy by expressing his desire to commemorate the migrants who have died at sea off the coast of Italy.

Corazzina has a history of advocating for so-called same-sex “marriage” in the Catholic Church.

In 2016, Italian TV network La7 released an interview clip with the priest entitled “I, a priest want to marry homosexuals.”

Watch LifeSite’s Mother Miriam explain the beauty of the Eucharist and the timeless Catholic faith below:

RELATED: Video of possible Eucharistic miracle in Mexico appears to show host pulsating like a heart