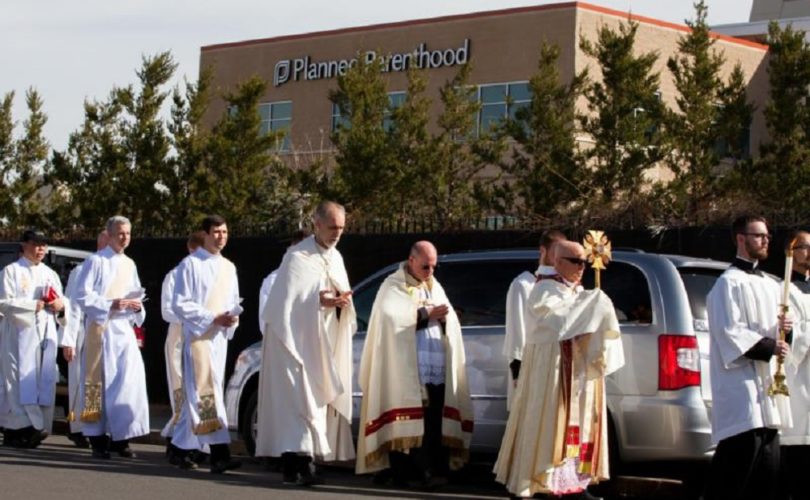 “We were honestly expecting 500-800 people,” said Karna Swanson, communications director for the archdiocese. “Three times that number showed up.”

“It was truly a moment of grace, a moment of blessing, a moment of praying to our Lord that hearts may be changed,” Archbishop Aquila told Catholic News Agency. “It was wonderful to see how many turned out today.”

The archbishop led the gathering of 1,800 Catholics seven times around the abortion giant's Stapleton, CO location.

Families with young children were abundant in the crowd, as were archdiocesan clergy and seminarians from both of Denver's seminaries, St. John Vianney Theological Seminary and Redemptoris Mater Archdiocesan Missionary Seminary.

Religious sisters were also part of the procession, including the Nashville Dominicans, the Sisters of Life, and the Missionary Sisters of St. Charles Borromeo.

When Archbishop Aquila announced plans for the procession last month, Swanson said, the response was positive and full of gratitude.

“We set up a simple website with a no-nonsense invitation for people to come and pray with the archbishop, and immediately we were hearing from people just thanking the archbishop for doing this,” she said.

Efforts were made by the archdiocese to ensure that reverence was maintained at the Eucharistic procession, with the archdiocese's liturgy office handling transference of the Eucharist to the site and providing prayer books for attendees, along with emphasis placed on prayerfulness and silence both in advance and on the day of the event.

“No shouting or arguing” was the message from the archdiocese in explaining the event on its website. “Only prayerful witness to the love and mercy of God.”

“Silence is an essential part of the procession as we unite our voices with those who have been silenced by abortion,” archdiocesan priest and secretary to the bishop Father Scott Bailey told the Catholic pilgrims before they processed.

The Eucharist procession, generally associated with the Feast of Corpus Christi, is explained in Canon 944, which states, “When it can be done in the judgment of the diocesan bishop, as a public witness of the veneration toward the Most Holy Eucharist, a procession is to be conducted through the public streets, especially on the solemnity of the Body and Blood of Christ.”

The St. John Vianney seminarians also helped to foster the procession's sacred nature by leading the hymns and prayers as it passed around the abortion facility.

The seminarians also assisted with crowd management, which was much needed, “as 1,800 people don't exactly fit on the sidewalk of a city block,” Swanson stated.

“We wanted to make sure everyone who wanted to participate could,” she said, “but we also didn't want to give any reason for the police department to shut the event down.”

Off-duty police officers were there to make certain the procession, which did spill into the street, didn't block traffic or cars from accessing the abortion facility.

Everything went smoothly, according to Swanson, who said the teamwork was wonderful among all of the various participants and law enforcement.

“It was obvious to all that we were just there to pray. And pray we did. Nearly everyone in the crowd was holding a rosary in their hands, and small groups throughout the crowd were praying the rosary together. We definitely stormed heaven with our prayers.”

Archbishop Aquila has been a forthright proponent of life, sharing his personal story in a pastoral letter of two encounters with abortion he'd had in college while studying medicine. He also led a Eucharistic procession to Red River Women's Clinic in Fargo, North Dakota in 2009 while bishop there and held a prayer service in front of the abortion facility.