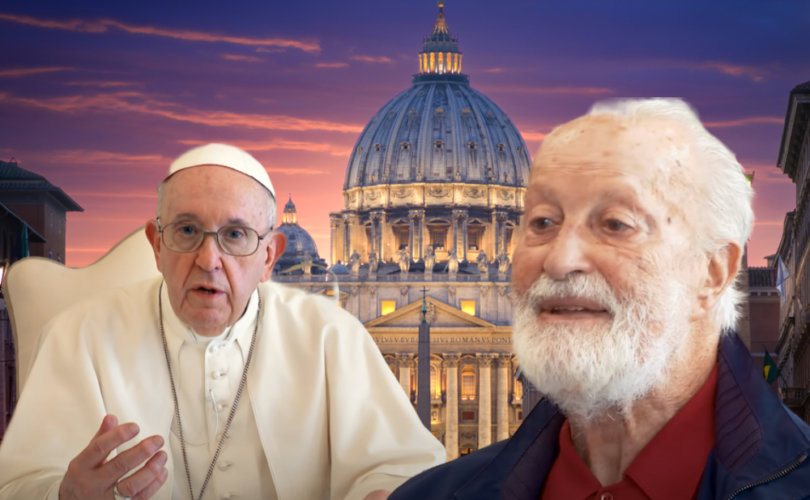 Scalfari’s death was announced by La Repubblica, the liberal daily newspaper he founded in 1976 and ran as editor-in-chief from 1976 to 1996.

A professed atheist, Scalfari was not only a journalist and politician but also a “friend” of Pope Francis, according to the words of the Argentine pontiff himself.

While Scalfari was a household name among many Italians, he was relatively unknown outside Italy until he conducted a series of interviews with Pope Francis, starting in the first year of the new pontificate, 2013.

As LifeSiteNews has reported previously, Scalfari did not limit himself to journalism, but served as a member of Italy’s Chamber of Deputies from 1968-1972, and was one of the founders of the left-wing, anti-Catholic and pro-abortion Radical Party in 1955. He is regarded as having been one of the leading voices in the drive to legalize divorce and abortion in Italy.

Speaking to LifeSiteNews in 2014, Riccardo Cascioli, editor and the director of the Catholic opinion paper La Nuova Bussola Quotidiana, described Scalfari as having “led La Repubblica to conduct all of the major anti-Catholic battles.”

Scalfari rose to greater fame, at least amongst the wider Catholic world, with his series of interviews conducted with Pope Francis. The interviews become notorious for Francis’s reported comments which regularly appeared to be in contradiction with fundamental aspects of Catholic doctrine – something which could not be verified since Scalfari was known for quoting the pope without taking documented notes.

In the October 2013 interview Scalfari conducted with Francis, which an embarrassed Vatican had to pull from its website, the pope was reported as saying that the “most serious” evils are “youth unemployment and the loneliness of the old.” Francis also allegedly told atheists to “abide by their own conscience.”

Moreover, Francis reportedly downplayed any need to convert Scalfari or others, saying “Proselytism is solemn nonsense; it doesn’t make sense.”

Scalfari’s fourth interview, published March 15, 2015, similarly presented heterodox comments from the pontiff.  The article alleges Pope Francis denied the existence of hell. Notably, there were no quotation marks denoting the Pope’s comments, nor was that interview ever published by the Vatican.

Following his regular conversations with Francis, Scalfari wrote in 2017 that “Pope Francis has abolished the places where souls were supposed to go after death: hell, purgatory, heaven.”

Indeed, in a 2018 interview Pope Francis reportedly told the atheist philosopher that “Hell does not exist; the disappearance of sinful souls exists.” Francis also reportedly denied the divinity of Christ, declaring that he is “a man and no more than a man.”  However, in the wake of shocked headlines following the article, Vatican press spokesman Greg Burke issued a statement confirming the Pope had “recently received the founder of the daily La Repubblica in a private meeting for Easter,” but said the pontiff hadn’t granted Scalfari “an interview.”

A year later, Scalfari doubled down on his published comments, claiming that Francis firmly believed Christ was a man only and “was not God at all.” Once again the Vatican scrambled to deny the claims on two successive days, with the Prefect of the Vatican’s Dicastery for Communications, Paolo Ruffini, saying: “the conversation dates back more than two years — cannot be considered a faithful account of what the Pope said and [what he said] can instead be found in all of his magisterium and that of the Church about Jesus, true God and true Man.”

Scalfari, despite being a professed atheist, nevertheless continued his campaign of weighing in on Church affairs, claiming that Francis had affirmed his denial of Christ’s divinity by arguing that Christ did not resurrect from the dead. Francis reportedly explained away the resurrection by saying that the risen Christ was nothing more than a “semblance of a spirit.”

Throughout all this, Pope Francis did not deny the comments which were attributed to him and continued to grant Scalfari interviews.

In an article published by Vatican News shortly after Scalfari’s death was announced, Pope Francis lamented the death of his “friend,” and recalled with “affection” their many meetings. Matteo Bruni, the director of the Holy See Press Office, said that Pope Francis learned “with sorrow of the passing of his friend.”

The statement, which was published only by Vatican News and not by the Holy See Press Office, added that Francis:

cherishes with affection the memory of the meetings — and the deep conversations on the ultimate questions of humankind — that he had with him over the years, and he entrusts his soul to the Lord in prayer, so that He may receive him and console those who were close to him.

The Jesuit director of Civiltà Cattolica, papal confidante Father Antonio Spadaro, said, “I have always been struck by the style of his interlocution with the Pontiff.”

Praise for Scalfari came in from public figures both clerical and political, including Italy’s Prime Minister Mario Draghi, who said the journalist’s death “leaves an unbridgeable void in the public life of our country.”

Cardinal Gianfranco Ravasi, the President of the Pontifical Council for Culture, echoed the Pope’s fondness for Scalfari and dubbed him a “protagonist of secular culture.”