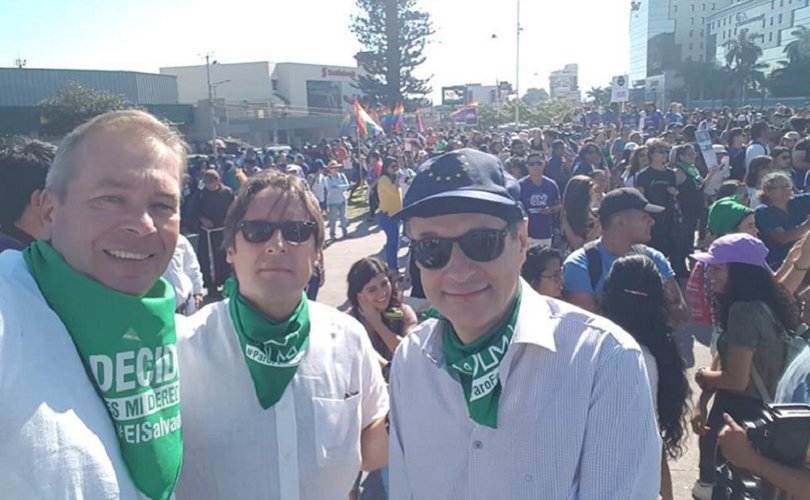 SAN SALVADOR, March 21, 2019 (LifeSiteNews) — Three European ambassadors joined a feminist march in the capital of El Salvador on International Women’s Day, March 8, sparking criticism from Salvadoran citizens who called their presence in a local demonstration “interference” in national affairs. The feminist march openly demanded legal abortion in a country where the right to life of the unborn child is protected by the nation’s constitution.

The three ambassadors hailed from Germany and France, and the European Union as such. Their presence was on an official level, as the respective embassies communicated widely about their presence.

Photos posted to Facebook and Twitter show the three diplomats posing or walking together, wearing around their necks the characteristic green kerchiefs that symbolize the fight for legal abortion in Latin America, from Argentina upward.

Ambassador Bernard Finke of Germany was quoted on the embassy Facebook page as saying: “It’s important for me to show solidarity with women from El Salvador. Many of them fall victim to various forms of discrimination and violence and we men are responsible for that. We cultivate a macho attitude. We believe that we are superior to women and that women should obey men. If they don’t, many men turn violent. But abusing or discriminating against women is not a sign of force, but of weakness. Whether we are men or women we should have the same rights and opportunities. I’m committed to this objective and that is why I joined this march. By joining I want to pay tribute to all the men and women who work for equality here in El Salvador and in the whole world.”

The French ambassador to El Salvador, David Izzo, tweeted at length about his participation, calling for “action for equality” everywhere, each day of the year. The official embassy account at the same time posted pictures of Paris on March 8, where President Emmanuel Macron received a feminist Salvadoran film director, Marcela Zamora Chamorro, at the Elysée presidential palace, where she posed in front of a portrait of Simone Veil, the minister who signed the legalization of abortion into law in 1975. Zamora has spoken in an interview about her own abortion, regretting that the subject should be a taboo.

As for the European Union’s ambassador, Andreu Bassols, his picture was posted on his Twitter account with the title of an op-ed he published the same day in the Salvadoran daily El Diario de Hoy: “International women’s day: Action, not celebration.”

Speaking about “inequality” and disastrous statistics regarding “feminicide” and teenage pregnancies in El Salvador, Bassols underscored what he called “painful deficiencies in sexual and reproductive health” in the country — yet another implicit criticism of the protection of the unborn.

Salvadoran pro-life leader Evange Sol de Guirola signed an op-ed on Wednesday in La Prensa Gráfica recalling that ambassadors, like any foreigner to the country, “should respect the laws and the cultural identity of El Salvador.” “Being the representatives of their countries, they are charged with fostering good relations between the nations and their citizens,” she added.

She went on to say that “according to the rules established by international agreements, non-interference in internal affairs of the States where they have been accredited is an elementary principle of any diplomatic mission. Mutual respect is a pre-requisite for every friendly relationship.”

She underscored that the three European ambassadors had joined a pro-abortion march, adopting its symbols and slogans that include “My decision, my right.”

“Such action constitutes a clear transgression of our sovereignty and is offensive to the Salvadoran people. They publicly demonstrated their desire to change laws that protect the smallest and most defenseless of the Salvadorans so that they can be freely murdered by their mothers. This interference exposes them to danger,” she added.

Evange Sol de Guirola also recalled that the constitution of El Salvador recognizes in its “first” article that “the human person is the origin and the end of the State,” which acknowledges as a person “each human being from conception, guaranteeing the rights of all persons.” “The right to life from which the others are derived is paramount,” she insisted. Instead, abortion advocates consider the unborn child a “hindrance” to women’s rights, she said, through “imperialistic ideology.”

“Perhaps they cannot understand that a very large majority of Salvadoran women do not want to kill their children. We love them and want to protect them from the womb. … We also recognize that the woman who aborts is a victim of exploitation in the name of a sanguinary business. She is also hurt,” she wrote.

She asked the ambassadors to work instead for proper care for pregnant women — the main cause for maternal death in the country is preeclampsia — and for shelters where women with problem pregnancies can go.

Ironically, the arrival point of the feminist march was the “Plaza del Divino Salvador del Mundo,” Divine Savior of the World Square.