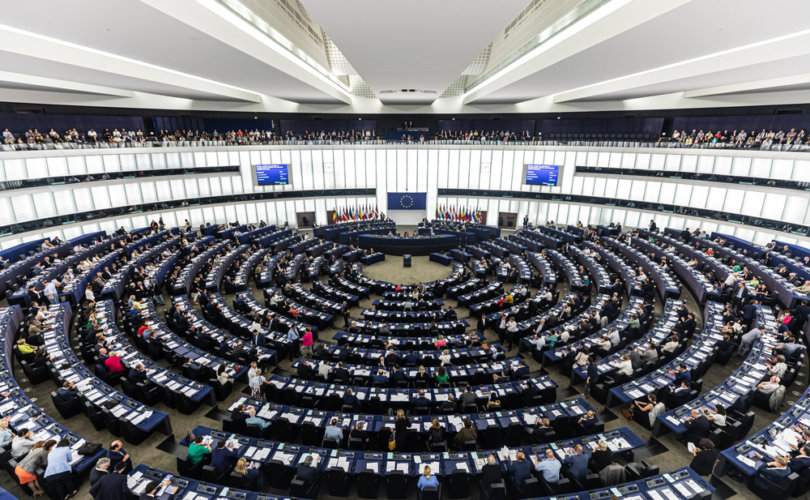 STRASBOURG, France (LifeSiteNews) – The European Parliament overwhelmingly voted Thursday to withdraw funding from Hungary and Poland over the two countries refusing to bow to the bloc’s pro-LGBT stance.

Members of the European Parliament (MEP) passed the resolution by a huge 478 votes in favor to 155 against, with 29 abstentions, to withhold funding from European Union (EU) member states that violate the “Rule of Law Conditionality Mechanism.”

The mechanism “makes the receipt of financing from the Union budget subject to the respect by the Member States for the principles of the rule of law,” effectively making any funding from the bloc subject to alignment with the EU’s core “values” of the day, including LGBT promotion.

An appeal by both Hungary and Poland to the European Court of Justice (ECJ) to overturn the mechanism was rejected last month on the basis that it had been “adopted on an appropriate legal basis … and respects in particular the limits of the powers conferred on the European Union and the principle of legal certainty,” cementing the possibility of Thursday’s vote.

Consequently, the Parliament now demands that the European Commission, headed by President Ursula Von Der Leyen, immediately apply the mechanism “by sending a written notification” to both Hungary and Poland.

“Parliament stresses that it is ‘high time’ for the Commission to fulfill its duties as the guardian of the EU Treaties and react to the ongoing violations of the principles of the rule of law in some EU member states, which pose a danger to the European Union’s financial interests,” a press statement from the European Parliament website reads.

“Inaction towards oligarchic structures weakens the entire European Union … taxpayers’ money needs to be protected against those who undermine the EU’s values,” the statement added.

Meanwhile, Hungary and Poland have offered generous assistance to those fleeing the conflict in Ukraine, with Poland receiving some 1.4 million refugees and Hungary has taken in approximately 214,000.

Frank Furedi of Spiked-Online noted the irony that while the EU condemns Russia’s attack on a sovereign state, the EU continues its assault on the sovereignty of its member states, regarding its own rule of law as superior to international legislation.

“The EU is effectively using its financial power to force recalcitrant member states to abandon any policies or laws it disagrees with,” Furedi blasted.

British conservative commentator and journalist Isabelle Oakeshott lamented the sanctions as a punishment on nations that are not “liberal enough.”

So far the Poles have welcomed 1.5m Ukrainian refugees. How does the EU repay them? By voting to impose economic sanctions on Poland for not being liberal enough. Guys, now’s not the time …🙄

Catholic journalist Sachin Jose echoed Oakeshott’s sentiments, saying in a tweet that the sanctions now set to be imposed on the two nations, especially in light of the influx of refugees, shows that the European Parliament “has become a joke.”

Disagreements between both Poland, Hungary, and the EU have already led to a delay in funds being provided to the two countries. Polish lawmakers called on the release of COVID recovery package-related funds yet unpaid. Poland is still waiting for €36 billion from the EU and Hungary for €7.2 billion.