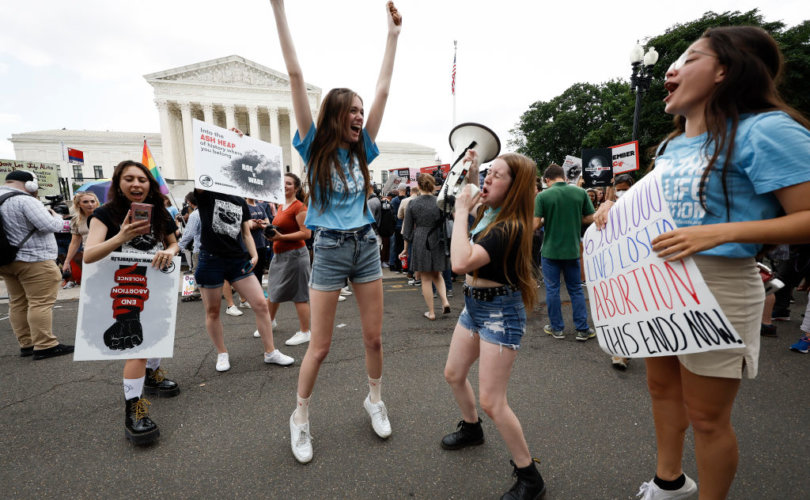 (LifeSiteNews) – With the U.S. Supreme Court’s long-awaited decision to overturn the landmark 1973 Roe v. Wade ruling imposing abortion across the nation now having been delivered, reactions from Europe are pouring in.

Activists and international leaders took to social media soon after the decision to strike down the 50-year-old law was announced, both praising and bemoaning the ruling which could see as many as 26 U.S. states make abortion illegal or impose strict restrictions on procuring an abortion.

Michael Robinson of Britain’s Society for the Protection of Unborn Children (SPUC) said that “[t]his is a momentous day for justice, the rule of law and, most of all, for the U.S. unborn and their mothers.”

“Of course, the fight for the right to life of the unborn continues in the U.S. and elsewhere, including in the U.K.,” Robinson stated. “The pro-abortion pushback might be extreme, but pro-lifers must stand their ground. Violence must not win.”

“SPUC supporters and other pro-lifers can take heart from this decision, a decision that, while not constituting total victory, will undoubtedly save millions of lives,” he continued.

“We are moving in the right direction, and we must always hope and never give up. Unborn babies and their families are counting on us.”

Eden McCourt of England’s Abortion Resist movement tweeted “Roe v. Wade has successfully been dismembered to death,” quipping that “[y]ou’d think, with their track record of support for this type of procedure, the pro-aborts would be happy.”

David Kurten, leader of the Heritage Party in the U.K., extolled the SCOTUS ruling as “good news … which will save the lives of countless unborn children henceforth.” The Heritage Party’s Twitter account also released a short statement, saying that “As the only UK-wide pro-life party, we celebrate the overturning of Roe v Wade in the United States, and will continue to campaign to abolish abortion in the U.K.”

Irish media outlet Catholic Arena also celebrated the decision, congratulating the Supreme Court on terminating the “most evil document in human history” and giving thanks to the prayers of Catholics and “the election of Donald Trump” for today’s pro-life ruling.

U.K. author and catechist Deacon Nick Donnelly tweeted after the news broke, celebrating the end of the “catastrophic” abortion legislation while warning that “the devil, and his demoniac slaves, will rage against the overturning of his blood sacrifice in so many U.S. States.”

Meanwhile, many European leaders lamented the ruling, publicly stating their opposition to Roe being struck down earlier today.

British Prime Minister Boris Johnson, a former Catholic, said that he “always believed in a woman’s right to choose” to kill their child in the womb and described the Supreme Court decision as “a big step backwards” for the U.S.

PM Boris Johnson says he’s “always believed in a woman’s right to choose” after US Supreme Court overturned a 50-year-old ruling that legalised abortion in the countryhttps://t.co/ioFEB3pEa2 pic.twitter.com/2zefC1ZJtH

In neighboring Scotland, the notoriously progressive left-wing First Minister Nicola Sturgeon tweeted her dismay in response to the 50-year-old law being struck down, saying today marks “one of the darkest days for women’s rights in my lifetime.”

One of the darkest days for women’s rights in my lifetime. Obviously the immediate consequences will be suffered by women in the US – but this will embolden anti-abortion & anti-women forces in other countries too. Solidarity doesn’t feel enough right now – but it is necessary. https://t.co/T1656BPQuL

“Obviously the immediate consequences will be suffered by women in the U.S. – but this will embolden anti-abortion & anti-women forces in other countries too,” she lamented.

Belgian Prime Minister Alexander de Croo also took to Twitter to express his disappointment in the ruling and his concern for the “implications … and the signal it sends to the world.”

Very concerned about implications of @USSupremeCourt decision on #RoeVWade and the signal it sends to the world.

Belgium will continue to work with other countries to advance #SRHR everywhere.

“Banning abortion never leads to fewer abortions, only to more unsafe abortions,” the prime minister claimed, adding that “Belgium will continue to work with other countries to advance SRHR [sexual and reproductive health ‘rights’] everywhere.”