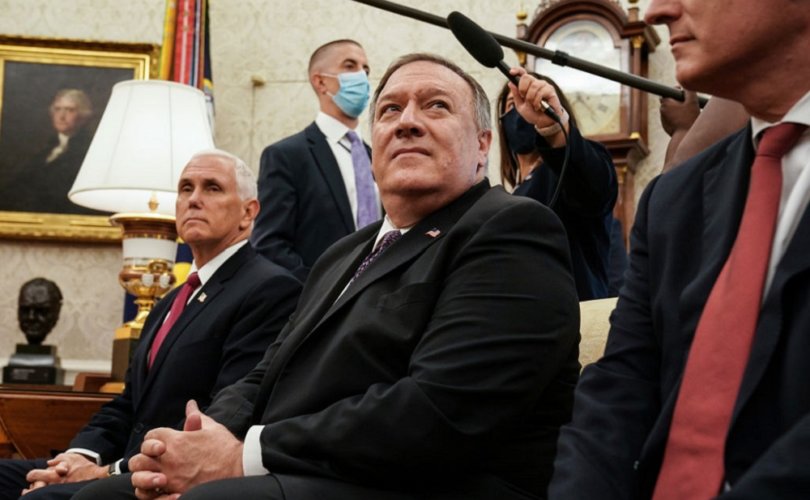 WASHINGTON, D.C. October 5, 2020 (C-Fam) — The United States just issued a statement at the UN reaffirming fundamental human rights long agreed to by UN Member States going back to the founding of the world body. Only 57 countries agreed to the statement; 136 did not join it.

The statement was fairly anodyne.

“…recommit ourselves today to the Declaration and its foundational ideal that certain principles are so fundamental as to apply to all human beings, everywhere, at all times. We recognize the many differences in our cultural, political, legal, religious, and other traditions, yet reaffirm fundamental freedoms and rights for all, and reassert our commitment to honoring the dignity of all persons that is the basis for our commitments under the UDHR.”

The European Union was having none of it. The EU urged its members states not to participate, according to the Washington Post. A European diplomat said the U.S. was “cherry picking” human rights even though the statement was broad, about principles and not specifics.

It appears opposition to the statement came primarily from abortion and LGBT activists who referred to the statement as dangerous to the progress they have worked to achieve through UN human rights bodies.

There exists some tension within the European Union nations on social issues. In the annual State of the Union address to the European Parliament, President Ursula von der Leyen directly challenged Poland, where some towns had declared themselves “LGBT ideology-free zones.” “LGBTQI-free zones are humanity free zones,” she said. She also insisted that family relationships — including same-sex marriages or parenthood by same-sex couples — should be mutually recognized within the EU: “If you are parent in one country, you are parent in every country.” She announced a forthcoming “strategy to strengthen LGBTQI rights” within the EU.

The statement was seen in the context of the U.S. Commission on Unalienable Rights, that Pompeo founded last year to reassert a basic understanding of human rights. Pompeo said, “the international human rights project is in crisis,” due in part to the neglect of basic human rights in favor of “partisan policy preferences” and claims of “new and novel rights that often conflict.”

From the beginning, the commission was criticized by pro-abortion and LGBT activist groups, some of whom even filed a lawsuit long before any of its findings were drafted. Despite their fears, the commission’s final report remained neutral on the abortion issue.

Some human rights advocates characterized the statement as “a cryptic way to ignore decades’ worth of treaties since 1948,” specifically citing abortion and LGBT issues as areas of concern. Ultimately, some EU countries, including Hungary and Poland, did join the statement, but overwhelmingly they did not. The EU mission at the UN tweeted its own statement insisting there is no hierarchy among rights, including economic, social, and cultural rights, which the U.S. has never formally affirmed as equal to civil and political rights.

Much of the work that has been done to insert abortion and “sexual rights” into international human rights discourse cannot be found in treaties or any binding instruments. It emerges in the recommendations of UN special experts and unelected expert bodies that monitor compliance with treaties, whose comments are then cited and quoted by bureaucrats within other multilateral agencies. Much of this has been driven (and funded) by the EU, where countries that defend more conservative social principles, like Hungary and Poland, face mounting pressure to conform.

“Let me be clear: LGBTQ+ rights are human rights — and ‘LGBT-free zones’ have no place in the European Union or anywhere in the world.”