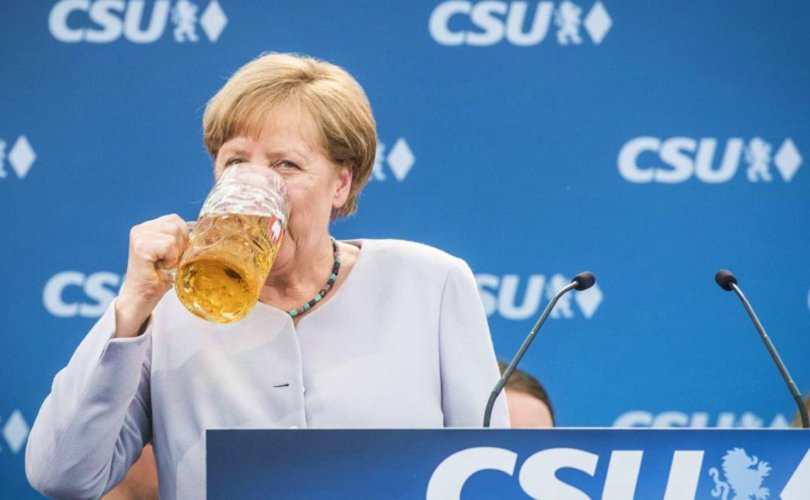 German's Angela Merkel, one of a long list of European leaders who have no children. EPA

August 16, 2017 (LifeSiteNews) — The majority of Europe’s leaders being childless not only symbolizes the death of Europe, but it demonstrates how leaders, having no hope for the future, have set the stage for a Muslim takeover, said commentator Mark Steyn in a recent video.

“The European political class is barren. In a sense, it exemplifies the barrenness of the general population, which is true in Western Europe,” he said.

Steyn pointed out how the leaders of Western Europe’s major countries are all childless.

“The leaders of Europe's biggest economies, and all the European members of the G7, in fact, are childless,” said Steyn.

“That would've been not only statistically improbable, but all but impossible for most of human history. Whatever Euro-politics is about, it's not about, in the words of the famous Bill Clinton cliché, the ‘future of all our children,’” he added.

Raheem Kassam, a British political activist and editor-in-chief of Breitbart News London, told Fox’s Tucker Carlson this week that Europe’s childless leaders have no “vested interest in the future of the West.”

“If you look across Europe, for instance, the leader in Germany, Angela Merkel, in Italy, the United Kingdom, France – all childless. And it’s interesting because the leaders who do have children are far more invested in the future of their nations than the leaders without,” he said.

Styne said the childlessness of Europe’s political class is the “demographics of Western Europe writ small.”

One country leader bucking the trend is Poland’s Beata Szydło who has two sons, one of whom is a Catholic priest. Poland also has one of the healthiest birth rates when compared to neighboring countries.

READ: Muslim takeover of Europe is ‘biggest story of our time’ and nobody knows it​

Steyn argued that most of Western Europe is already in the death throes of “demographic suicide” because couples are not having enough children to replace the population. Birthrates of most European countries are well below the 2.1 children per couple needed to maintain a population. Steyn pointed out how a thriving Muslim population in Western Europe is well on its way to filling all the empty spaces.