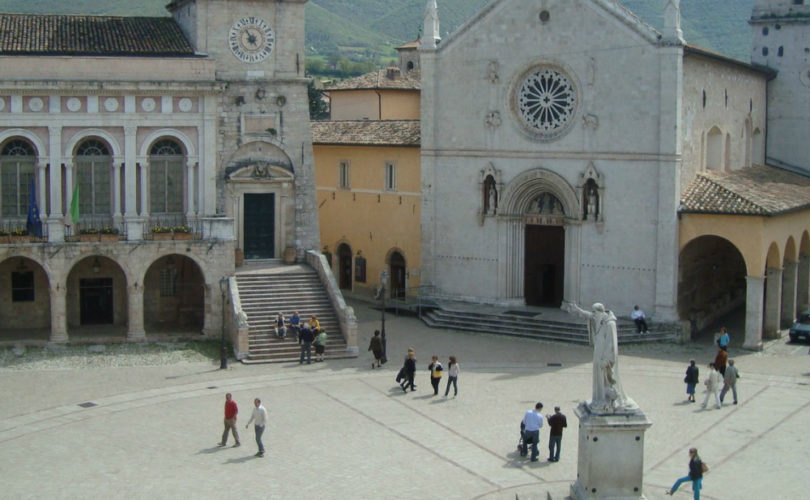 The statue of St. Benedict in a piazza in Norcia, the town of his birth

NORCIA, Italy – The “relativistic” thought that arose after Europe rejected its own Christian roots has created a cultural weakness that has allowed the resurgence of aggressive Islam, a coalition of “Ratzingerian” thinkers, activists, and politicians heard this weekend. At their annual meeting in the ancient Umbrian town of Norcia, the conference warned that the West is squeezed between a radical “post-human” secularist ideology on one side,  pressuring for changes to the fundamental concept of humanity, and the resurgent violence of the new Islamic “Caliphate” exploiting this weakness on the other.

Gaetano Quagliariello, the president of the Fondazione Magna Carta, called for the development of a “new humanism,” one no longer divorced from its Christian intellectual roots. The foundation meets each year in the birthplace of Europe’s Catholic patron, St. Benedict of Nursia, to discuss “the future of the West,” in the context of increasingly aggressive ideological attacks on the traditional legal bastions of European and Italian society such as the family and marriage.

The foundation was launched also in response to the immense geopolitical developments following the September 11, 2001 attacks in the US. “In the geopolitical field,” Quagliariello said, “new fractures” appeared years after most in the West had expected a period of peace following the end of the Cold War. 9-11 “ended up profoundly changing the concept of war,” one major aspect of which is the “cultural weakness” of the West, the “relativistic theory,” that has come about with the rejection of Christianity.

The aim was to apply the social and political thought of Cardinal Joseph Ratzinger, who was to be elected Pope Benedict XVI shortly after the group was first formed. “Behind the birth of the meetings of Norcia was the speech delivered by the then Cardinal Ratzinger in Subiaco, in April 2005, on the eve of his accession to the papacy,” he said. In that speech, Cardinal Ratzinger called for non-believers to take “Pascal’s wager” and “live as if God existed.”

The Norcia meetings were “conceived as an opportunity to respond to that call, and to create a moment of reflection in which Catholics and lay people could find themselves in a sort of ‘Court of the Gentiles’ in order to discuss the issues raised by this appeal.” To accomplish this re-thinking of the value of Christian teaching in the political, ‘secular’ spheres, “the teaching of Ratzinger was crucial,” Quagliariello told an interviewer.

The annual meetings address in part the movement of “aggressive secularism” as it was called by Pope Benedict, that is focusing more and more on “gender ideology.” This ideology is what Ratzinger’s intellectual followers have identified as a fundamental assault on traditional anthropology, attempting to reinvent basic concepts of what it means to be human. Quagliariello said the meetings were launched in response to this massive “cultural reclassification.”

The foundation attempts to “revisit the concept of secularism: no longer to be understood as a clear separation between the sphere of the state and that of the Church, but as a dynamic distinction, finally accepting that religion is an essential part of the public space and enriches the public space.” The hope is to apply Christian social teaching to the social, political and economic spheres, while “avoiding considering Christianity as simply ‘civil religion.’”

Much of the “agenda of the millennium” surrounds macro-economic and social issues that cannot be decided at the level of single nation states, he said. But a “common policy” must “serve the common roots, and if we forget the Christian principles on which Europe is founded, or if we cease to want to embody them, it is unlikely to go far,” he said.

“In the case of the anthropological challenge…the public debate is increasingly between supporters of science and [its] alleged detractors, who have said that science has to know how to set limits.”

The public debate is increasingly centering around “inequalities” claimed by those who “have the ability to turn a wish into a right and those who cannot [allow] this.” In the darker end of the discussion, he said, are the sciences, such as artificial procreation and embryo research, that “run the risk of falling into eugenics, which inevitably brings with it the risk of racism.”

Eugenia Roccella, a former feminist turned conservative legislator who also made presentations this weekend, said the location of the meetings was “no accident.”

“The awareness of the great geopolitical changes, a retreat from and a deep loss of European culture, led us, in October 2005, to hold meetings between believers and non-believers, starting with the recognition of the common Christian roots, to imagine and define a new secularism,” she said. These meetings aim at moving the perception of the secular away from the current form associated exclusively with anti-Catholicism.

“The choice of the place, then, is not accidental, because it recalls the intelligent industriousness, imbued with spirituality, of the Benedictine communities, which saved the great treasure of the cultural tradition of the West to hand it down to posterity.”

She noted the irony of the “paradoxical situation in which we have a Europe that seeks increasingly to cancel, or at least put in the shade, its Christian roots. And then there are those who, precisely because of those roots, would destroy us.”

The attacks in the US on September 11, 2001, “forced the Western world to reflect seriously about their identity, in order to address those who, in the name of hatred against us, had decided to attack us,” Roccella continued.

Roccella said that the meetings are more needed than ever since their first in 2005, which “was the year of the [Italian] referendum on fertility, the ‘assisted death’ of Terri Schiavo: stories of the start and end of life that marked an era of great public battles on the anthropological question.”

“It was, also, the year of the change from John Paul II to Benedict XVI, two pontiffs deeply linked to Europe, both of whom have claimed strongly Christian roots of our continent.”