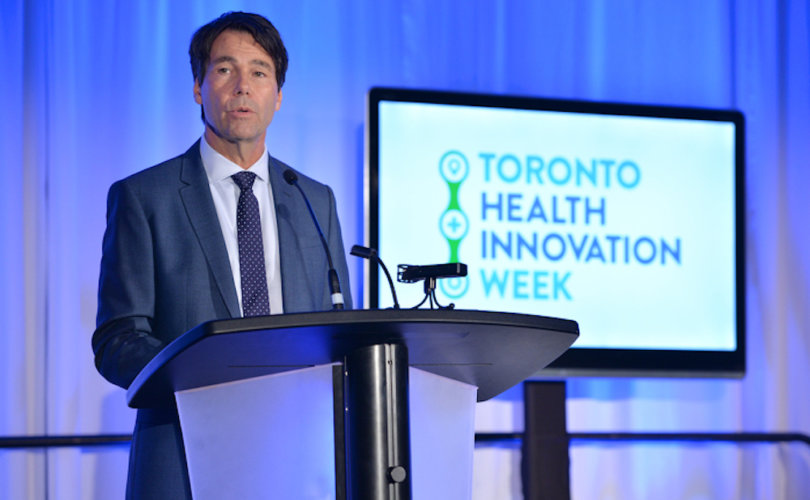 TORONTO, April 6, 2017 (LifeSiteNews) — Ontario doctors will be forced to be complicit in killing their patients by euthanasia or assisted suicide unless the Liberal government amends Bill 84 to include conscience rights protection, warn physicians' rights advocates.

Health Minister Eric Hoskins said last week that the Liberals will set up a toll-free number by May to connect patients requesting euthanasia or assisted suicide with healthcare workers willing to kill them.

The “care-coordination service” will “allow patients to contact central staff who will connect them with healthcare providers prepared to handle requests for a medically assisted death,” according to an April 2 Canadian Press report.

The report suggests that individuals seeking euthanasia can bypass doctors who object to killing their patients by using the “death hotline,” says Alex Schadenberg, executive director of the Euthanasia Prevention Coalition.

But such a “death hotline” won’t protect doctors’ conscience rights, he told LifeSiteNews.

The College of Physicians and Surgeons of Ontario’s current policy forces doctors who object to killing their patients to give them an “effective referral,” that is, to an accessible colleague who will kill them.

The CPSO policy also forces doctors to do the same for women seeking abortion and abortifacient contraception, and to provide such “medical services” themselves in unspecified emergency situations.

The Liberals’ Bill 84, which regulates euthanasia and assisted suicide in Ontario, has “nothing” right now that frees doctors from having to make an “effective referral,” says Schadenberg.

Physicians will be “forced to provide information about the ‘death hotline’ to patients who ask about euthanasia,” he said. And “referring people to the death hotline is the same as an effective referral.”

Doctors “should never have to refer you to that number in any way shape or form,” Schadenberg said.

“It’s bad enough that it’s legal to kill somebody, we should have nothing to do with it.”

Schadenberg also disputed Hoskins’ description of Ontario’s euthanasia system as the same as the “Alberta model,” as reported in the Globe and Mail on April 2.

Alberta has also set up a “death line,” he told LifeSiteNews. “But there’s nothing in Alberta College, in the Alberta legislation, that requires a doctor to refer you to that number.”

And Ontario’s “death hotline” not only won’t protect conscience rights, but “it will increase the number of euthanasia deaths by streamlining access to death by lethal injection,” Schadenberg wrote in his April newsletter.

Canadian Press reported that 365 people died by euthanasia in Ontario between June 2016 and March 30, 2017.

The Coalition for HealthCare and Conscience also blasted Hoskins for comparing Ontario to Alberta in a Wednesday email alert to supporters.

More significantly, Hoskins’ remarks have “confused” MPPs and given them the “incorrect impression that an effective referral is no longer needed with the model the government has implemented.”

But the CPSO “still requires an effective referral from doctors if requested by a patient – even though a care coordination service has been created,” the Coalition wrote.

“We need you to write to Minister Hoskins and CC your MPP before April 11th,” the Coalition email urges, “so they are aware that to protect conscientiously objecting doctors and health care providers here in Ontario we must implement a conscience amendment in Bill 84!”