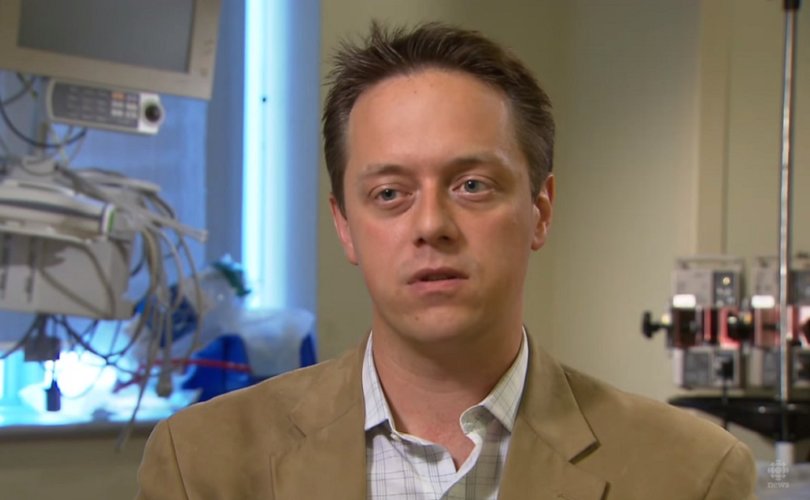 OTTAWA, May 1, 2019 (LifeSiteNews) — A doctor who performs “assisted deaths” and lobbied for legal euthanasia in Canada now has a pivotal role at a Catholic hospital in Ottawa renowned for its palliative care.

Dr. James Downar was hired in October as head of palliative care at the University of Ottawa, a tripartite position in which he splits his clinical time between the intensive care unit at Ottawa General Hospital and the palliative care ward at the Catholic Elisabeth Bruyère Hospital.

Downar is also a researcher with the Bruyère Research Institute.

Bruyère runs Ottawa’s only hospital-based palliative care unit and, with its research component, is regarded as one of the key palliative care facilities in North America.

Catholic moral theologian Dr. E. Christian Brugger says allowing such assessments at Catholic institutions is “morally wrong cooperation” because it is “scandalous and a gross failure to bear witness to the Gospel.”

Downar’s appointment flew under the radar until the Catholic Register’s Deborah Gyapong reported in February that a social media storm had erupted protesting his role at the Catholic hospital.

Downar’s euthanasia advocacy is a matter of public record.

As the former chair and member of the Physician Advisory Committee for Dying with Dignity Canada, he lobbied for the legalization of euthanasia in Canada.

He performs assisted deaths, supports the harvesting of organs of euthanized individuals, was a paid consultant on the Canadian Medical Association course on “Medical Aid in Dying,” and advocates that euthanasia be part of palliative care.

Tellingly, Downar illustrated the negative consequences of not including euthanasia as part of palliative care with a collage of headlines about Catholic hospitals causing grief by not allowing patients to be killed onsite in his September 2017 presentation at Dalhousie University.

Downar not fit to be at Catholic hospital: EPCC

Downar is not qualified for any leadership role at a Catholic hospital, says Alex Schadenberg of the Euthanasia Prevention Coalition.

“I see Dr. Downar as philosophically euthanasia first, palliative care second, and if someone were to challenge me on that, I would say prove me otherwise,” he told LifeSiteNews.

Moreover, Downar’s “original type of vision” would include “making it easy for people to transfer to the public hospital when they start bringing up the idea of lethal injection, and so they’ll make this almost seamless,” said Schadenberg.

“And by doing so, this will become a priority of how we deal with things, and they’ll see this as being the ‘example of care,’” he said.

He pointed to St. Martha’s Hospital in Antigonish, Nova Scotia, where “the death lobby is pushing so hard to force them to become complicit in euthanasia because they are the major hospital in that area.”

Downar not a threat to Catholic hospital

“Recognizing that EB cannot and does not allow Medical Aid in Dying or euthanasia on its premises, Dr. Downar subscribes to the Catholic Ethical Code in his service at Bruyère and has committed to not publicly espousing aid in dying,” Prendergast said.

Dr. Jill Rice fulfils that role and will work alongside Downar, who has visiting privileges at Bruyère because of a pre-existing agreement with the Ottawa Hospital and uOttawa, the archbishop said.

Downar was “interviewed separately by Ottawa Hospital, uOttawa and Bruyère” for the regional position, and “the outcome was supported by all parties involved,” according to Jesse Cressman-Dickinson, director of communications for Bruyère continuing care.

The hospital board members “were not on the selection committee however, they along with the CHSO (Catholic Health Sponsors of Ontario) and the Archbishop were consulted several times during the appointment process,” said Cressman-Dickinson.

Downar is “recognized as an innovator in the field of palliative care” and “wants to provide those who are suffering and considering MAiD with an alternative. This is what drew him to Bruyère,” she told LifeSiteNews.

The euthanasia advocate “presented a vision for a palliative care system that better identifies patients needing this type of care and innovates in the delivery of new treatments to address the physical, psychological and existential pain of these patients, providing an alternative to Medical Assistance in Dying (MAiD),” she said.

“It was clear. He is an advocate for the best in palliative care.”

‘No thank you’ to Downar

Schadenberg is not convinced.

Downar was the “founding leader of Dying with Dignity physicians’ group, and he’s absolutely committed to the euthanasia philosophy,” he told LifeSiteNews.

“His palliative care will not be the same as what we are used to with Bruyère, and to suggest he will not influence that is innocent at best, because he is a man who over time will want to see changes,” said Schadenberg.

“Bruyère is a separate institution” from the Ottawa Hospital and “could have said ‘no thank you’” to Downar, he said.

Voluntary euthanasia on the rise in Canada, accounting for over 1% of deaths in 2018