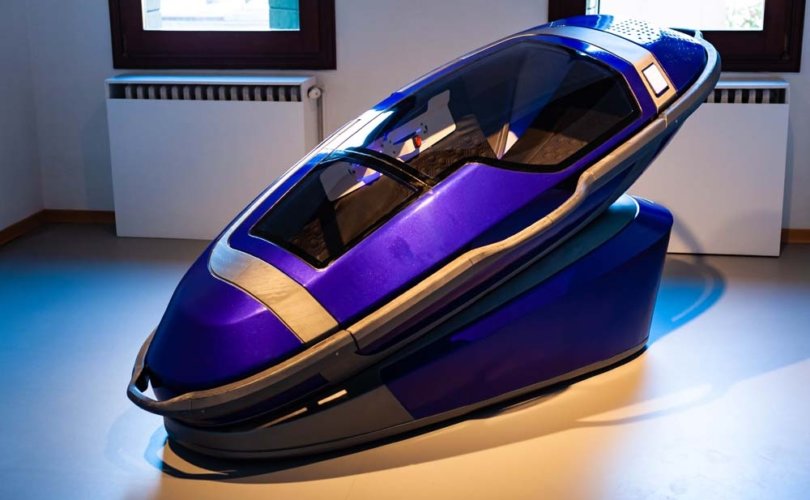 AMSTERDAM, May 31, 2019 (LifeSiteNews) – An internationally recognized euthanasia expert known as “Dr. Death” has invented an “elegant and stylish” death pod in the shape of a coffin that users can climb into, push the “die button”, and meet their demise “within minutes” as liquid nitrogen quickly lowers the oxygen level.

The death pod is the brainchild of Philip Nitschke, the founder of Exit International – an organization that promotes suicide – and is dubbed ‘Sarco’ since it can ultimately serve as a sarcophagus or coffin for the victim.

“Sarco is a euthanasia device that uses liquid nitrogen to lower the oxygen level, delivering a peaceful death within minutes,” states a promotional video about what is being dubbed by its inventors as a “euthanasia machine.”

The machine is currently on display in Venice until November (see photos here).

Instead of mass producing the death pod and encountering all kinds of legal problems in trying to market and sell a product that kills people, inventors have decided to release the plans so that victims can create the pod themselves by means of 3D printing machines.

Open source plans for the Sarco are to be made available online for this purpose.

“It’s beautifully designed. It’s functional in purpose. And its simplicity of its innovative technology is a wonder to behold,” said Australian Dr. David Swanton about the machine in a promotional video.

“It's utopian. It’s brave new world stuff, previously unthought of,” said Jan Clifford, an Australian, in praise of the machine in the video.

Sarco designer and creator Alexander Bannink said the death pod was designed to make it as intuitive as possible to use.

“You don’t want to explain to people that are on the verge of entering how to enter, because that needs to be clear from the design. So, there’s a handlebar, there’s a window that drives you towards that. The shape guides you, which is good…you can immediately see how to use it,” he said.

Despite promising an empowering death experience where the user is entirely in control, users still need to obtain a code from a third party to activate the machine.

“You can’t activate Sarco without obtaining a code. When you have that code, we are certain that you’re sane, that you’re sound of mind, and so you are eligible for a peaceful death,” said Bannink.

“And we have a 'die' button and also a 'stop' button, because that needs to be in there. There is also an escape hatch. So we make it a ‘safe’ product because that is what a good designer does,” he added,

According to the Exit International website, Sarco's “elegant design” was “intended to suggest a sense of occasion: of travel to a ‘new destination’, and to dispel the ‘yuk’ factor” that is usually associated with killing oneself.  No drugs or skills or specialists are needed, while activation by eye movement or voice is anticipated to allow the capsule’s use by the disabled. “The goal of Sarco is to remove the need for any assistance,” the website states, adding that this “ensures any use of the Sarco is legal.”

“What could be better than having your family and close friends over for lunch, a glass of champagne — wines — and hop into the Sarco, and off you go on a peaceful, quick, and safe imaginary flight to heaven,” said Australian Sally Curlewis about the machine in a promotional video.

Euthanasia and assisted suicide have been legalized in many countries including the Netherlands, Switzerland, Germany, Canada, and some U.S. states. Opponents to the practice note how a “slippery slope” effect in such countries has resulted in justifying death as a solution to more and more problems.